With growth expected to come in around 6 per cent in 2017 and 2018, the World Bank has called Kenya ‘one of the bright spots in sub-Saharan Africa’. Sustained economic growth, increasing foreign investment and the execution of infrastructure mega projects are amongst the factors that will help transform Kenya into a newly industrialising, middle-income country by 2030 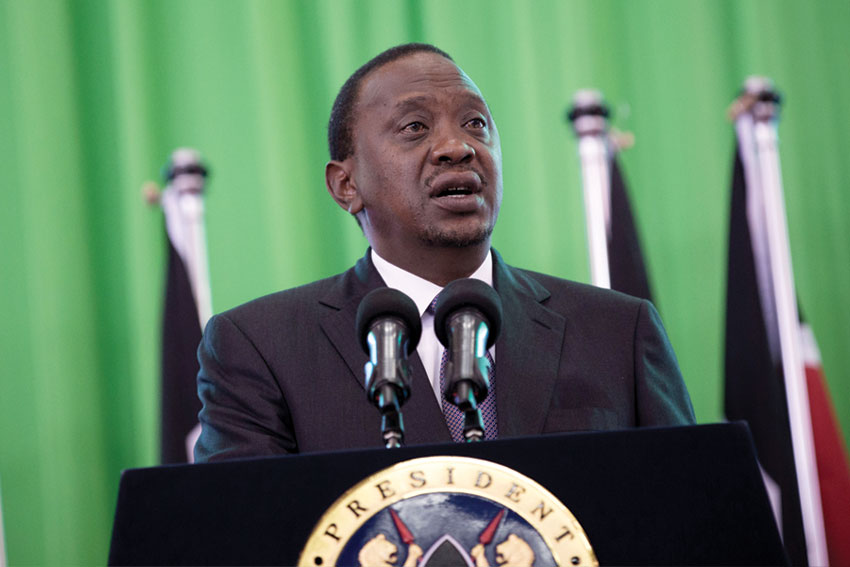 SINCE MR KENYATTA CAME TO POWER IN 2013, KENYA HAS QUADRUPLED ITS SPENDING ON INFRASTRUCTURE, WITH THE GOVERNMENT BORROWING HUNDREDS OF BILLIONS OF SHILLINGS FOR LARGE-SCALE ENERGY, TRANSPORT AND ICT PROJECTS
SHARE

While Nigeria, Angola and South Africa struggle with low commodity prices, Kenya can currently boast one of Africa’s most robust economies. Kenya’s GDP is estimated to have grown by 6 per cent in 2016, up from 5.6 per cent in 2015, and well above the forecasted 1.7 per cent for the sub-Saharan region. The rate of growth will continue at 6 per cent in 2017 and 6.1 per cent in 2018, according to the World Bank’s latest October report.

“With economic growth rates sustained at above 5 per cent, Kenya has outperformed the regional average, for eight consecutive years. Robust domestic demand emanating from private consumption and government investment are the key drivers of growth, underpinned by a stable macroeconomic environment, lower oil prices, diversification, improved security perceptions, and ongoing structural reforms,” the World Bank report states, citing agriculture, construction, increased foreign investment and a rebound in tourism as the main drivers of growth in 2016.

The tourism industry was hit hard by security threats – most notably the Westgate Mall attack in 2013 – in recent years. But with the security situation much improved, tourist numbers in 2016 are estimated to have increased by 20 per cent on 2015, reaching almost 1.7 million by year end, while tourism earnings jumped to KES 100 billion (approx. £790 million), up from KES 84.6 billion in 2015.

Meanwhile, the agriculture sector, which makes up a quarter of GDP, experienced gains of 5.3 per cent in the first half of 2016, thanks to favourable weather conditions that led to increased production of key crops such as tea.

Since 2011, foreign direct investment (FDI) in Kenya has grown significantly year-on-year. In 2015, net FDI inflows reached a record $1.437 billion (approx £1.2 billion), which was used to fund more than 80 large-scale projects in real estate, renewable and geothermal energy, as well as roads and railways. A recent report by investment monitoring platform FDI Markets ranked Nairobi as Africa’s top foreign direct investment destination as it saw inflows surging by 37 per cent in 2015.

“The trends in FDI have increased significantly over the last few years, namely in oil exploration, geothermal energy, and infrastructure,” says Henry Rotich, Cabinet Secretary at the National Treasury.

“We have seen a growing interest in investing in Kenya, however the challenge has been to materialise those enquiries into actual and real investments. We are working closely with the national government to follow on the recent momentum.”

The UK remains the country’s largest investor, with British companies active across the services, manufacturing, energy and agriculture sectors. Remittances from the Kenyan diaspora in the UK has nearly doubled from $275 million in 2010 to $520 million in 2015, and is the single largest source of foreign exchange (representing about 2.6 per cent of GDP in 2015).

However, Kenya’s dependence on cash and investment inflows from the UK makes its quite vulnerable to the consequences of the fall-out from Brexit, and the World Bank warns that the East African nation is “likely to be hit from both direct and indirect channels as a result of the UK’s vote to leave the EU.”

The increase in FDI to Kenya can be, in part, attributed to the continuously improving business climate. While many obstacles remain, Kenya jumped 16 places to 92nd in the World Bank’s Doing Business Index 2017 – that followed a jump of 28 places in the 2016 Index, from 136th to 108th – and is now among the top five economies in sub-Saharan Africa where it is easiest to do business.

“What we have done is simplify the business environment by removing the red tapes which hampered business establishment. You can register your company in Kenya, manufacture your goods and access both the local and foreign markets unlike before when you had to choose one,” said President Uhuru Kenyatta at the UN General Assembly in New York in September.

“I am here to tell you that Kenya is ready for business and we have taken necessary measures to make it easier for you to invest in Kenya.”

Since Mr Kenyatta came to power in 2013, Kenya has quadrupled its spending on infrastructure, with the government borrowing hundreds of billions of shillings for large-scale energy, transport and ICT projects. Some highlight mega projects include: the $3.8-billion Standard Gauge Railway Project, its biggest investment in infrastructure since it gained independence from Britain in 1963; a $2.2 billion investment in solar energy developments that will add 1 gigawatt to the grid; $3.2 billion for 10,000 kilometres of new roads; and the $2.9 billion National Broadband Strategy to increase access to high speed internet across the country.

“Infrastructure is a necessity if our economy is to grow and if we are to achieve the prosperity we desire as a people and as a nation. We cannot run away from it,” Mr Kenyatta said at a Nairobi infrastructure summit in August, in response to critics of his government’s massive borrowing for infrastructure development.

But the government cannot cover all the investment costs, and wants to avail of financing options such as public-private partnership (PPP) initiatives to ensure the bulk of infrastructure megaprojects are completed.

“Tapping into PPP financing is particularly advantageous for Kenya, in light of increased confidence from foreign private investors and its position as one of the largest economic powerhouses in sub-Saharan Africa,” said infrastructure investment expert Akshai Fofaria of law firm Pinsent Masons.

“Substantial investment in infrastructure is critical to achieving the ‘Kenya Vision 2030’ to become a globally competitive country.”

Vision 2030: A blueprint for a prosperous future

The national Vision 2030 development plan aims to transform Kenya into a newly industrialising, middle-income country providing a high quality of life to all its citizens by 2030 in a clean and secure environment.

“Vision 2030 is an ultimate set of guidelines that aims to eradicate poverty, create a thriving economy, fight graft, build infrastructure, provide better-quality education to our citizens and make Kenya a hub for the rest of sub-Saharan Africa,” says Dr James Mwangi, Chairman of Vision 2030.

“It is anchored on three key pillars: economic, social, and political governance. The objective is to achieve an economic growth rate of 10 per cent per annum and sustaining the same until 2030.”

Prioritised under the economic pillar are infrastructure development and the aforementioned mainstays of the economy, agriculture and tourism, as well as trade, manufacturing and business process outsourcing. Financial services will play a crucial role in the realisation of Vision 2030, which aims to deepen the capital markets and turn Nairobi into an international financial centre – initiatives overseen by the National Treasury.

“In Kenya the financial services sector is critical to achieving the Vision 2030 target of 10 per cent annual average economic growth,” explains Treasury Cabinet Secretary, Mr Rotich. “The sector is expected to stimulate a significant increase in investments and savings through mobilising both domestic and international resources.”

The political pillar focuses on public sector reform, constitutional changes, judicial and legal reform, improving policing and security, and tackling corruption, a thorn in the side of many African nations.

“The government is aligned with the private sector to eradicate the menace of corruption,” says Dr Mwangi.  “Corruption is a sickness that cannot be cured overnight. We are making milestones every year. In the next 15 years we can comfortably reflect back and see how different our country will be from the country that we inherited before Vision 2030.”

The third and final social pillar of Vision 2030 aims to increase the affordable housing stock across the country, improve and expand vital social services like health, education, water and sanitation, and develop human resources. Dr Mwangi says there has already been great progress made in education, with “27 per cent of Kenyans now accessing high-quality third-level education.”

The need to strengthen the role of women in business and government in order to support economic growth has also been recognised: under the plan, women entrepreneurs will have increased access to funding, while initiatives will be put in place to increase female representation at executive level in all branches of the government and the private sector.

Like long-term development plans in many other African nations, the goals of Kenya’s Vision 2030 are, indeed, lofty, and a great number of challenges must be overcome to achieve them.

“As the saying goes: Rome wasn’t built in a day,” says Dr Mwangi.  “It has only been three years since the introduction of Vision 2030 and of course we are facing certain challenges and bottlenecks, but in another 15 years I believe most of the initiatives will take roots and mature.”

A new managing director for Vision 2030

Joining Dr Mwangi on the management board of Vision 2030 is another highly experienced businessman, Julius Muia, whom President Kenyatta appointed as managing director on November 1.

Following his appointment, Dr Mwangi hailed Mr Muia as “one of the outstanding leaders in our country with a distinguished career in the private sector and public service. He is not only a great scholar, but an experienced administrator and a gifted visionary with a reputation for representing great ideals.”

During his career spanning three decades, Mr Muia has served as the Secretary of the National Economic and Social Council, a top advisory government think-tank; and chief operating officer at HF Group, Unga Group Limited and Lonrho Hotels Group, amongst many other roles.

President Kenyatta hopes Mr Muia’s experience and intellect will help to drive Kenya the towards the realisation of Vision 2030.