Growth through reforms in Egypt

These are exciting times for Egypt. A new government, bent on implementing the necessary reforms to boost growth across the board, is hosting a conference that will showcase luring investment opportunities 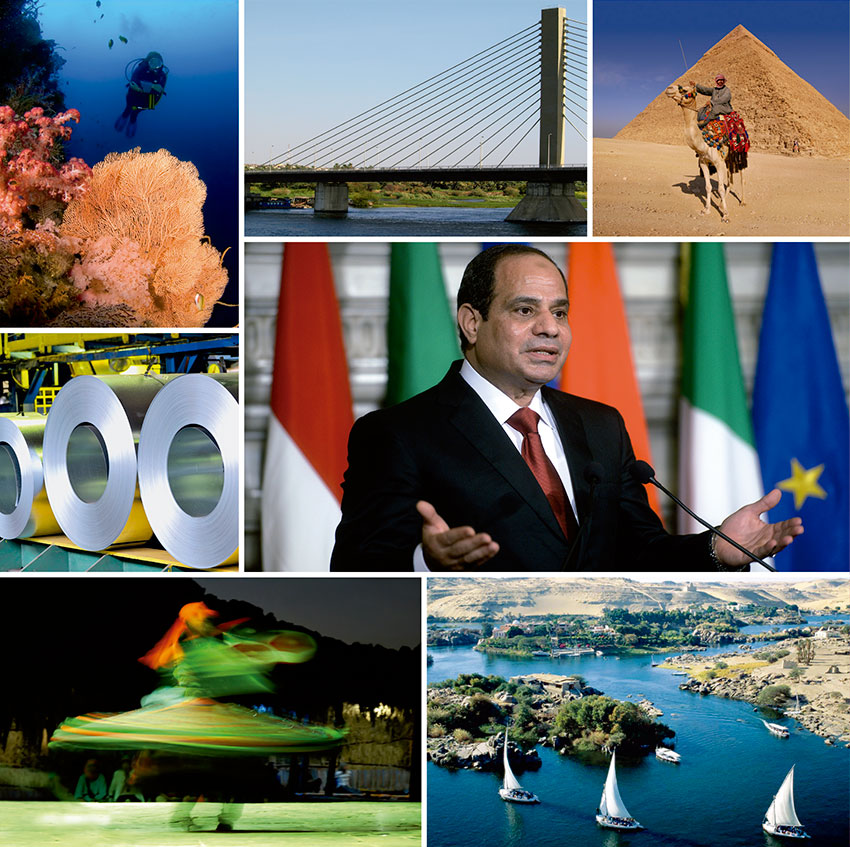 Egypt’s recent past has unfortunately had a negative impact on its economy, but President Abdel Fattah Al-Sisi, elected in 2014, and his government are committed to improving life for all Egyptians, a fact which resonated with voters who believe in his vision for Egypt.

The country has faced persistent inflation, low and non-inclusive economic growth, and high levels of unemployment. In 2011, the nation’s political and resulting social instability intersected with its sizeable fiscal deficits and increasing public debt to exacerbate the country’s existing issues with infrastructure and macro- and microeconomic ones. Yet because Egypt’s banks had undergone reforms in the 2000s, the banking sector was able to meet these recent challenges from a fairly strong position, a sign of the country’s potential for future economic and social success.

To put the country on solid footing, President Abdel Fattah Al-Sisi and his government have set several goals. They aim to increase foreign exchange reserves to 3.5 months of imports; to raise growth to 6% yearly; to decrease the fiscal deficit to 8% of the country’s GDP; to bring debt down to 80-85% of the GDP; and to reduce inflation to 7% yearly. And they plan to accomplish this within the next five years. Though this may seem overly optimistic, the International Monetary Fund has reviewed their plans and says they are ambitious, but also appropriate and, most importantly, attainable.

President Al-Sisi and his administration have already taken major steps towards these goals, aided by the nation’s increasing political stability. The clearest example can be seen in the somewhat controversial fuel and electricity subsidies reform. In July 2014, prices of gasoline and diesel were raised by between 40% and 80%, and electricity prices were raised by 20%. The government has also streamlined its bread subsidies and reformed its food ration card program.

Egypt’s government has also introduced taxes on capital gains and dividends, imposed an additional 5% tax on incomes at higher levels, and revised property taxes. Meanwhile, the Al-Sisi administration has also started a trial program with 600,000 citizens, giving an unconditional benefit for its disabled and elderly citizens as well as support for families living in poor areas.

In addition, the government has increased its spending on infrastructure programs along with its social spending. The wages for teachers and doctors and the minimum wage for government employees have all increased.

“With a sensible macroeconomic policy framework, persistent structural reform, the full and welcome participation of the investor community, and the hard work and persistence of the Egyptian people, Egypt’s renewed blueprint for stability, investment and growth will no doubt be realized” Abdel Fattah Al-Sisi, President of Egypt

The results are encouraging. Prime Minister Ibrahim Mahlab is particularly pleased with fuel price increases and simplified benefits processes: “This has freed up billions of dollars in the government’s budget so that we can now invest in more education and health care programs for those who really need it.”

The 2013/2014 GDP increased by 2.5%. Several of the country’s sectors are seeing an increase in activity, including tourism and natural gas extraction. And the economy is beginning to recover, experiencing a level of strength not seen for some time.

President Al-Sisi is not content to stop here, however: he has many more plans to implement. To improve Egypt’s business climate, the government plans to overhaul regulatory framework to remove red tape, and it expects to increase small and medium enterprises’ access to financing. With these moves, the government expects to create a more level playing field for all businesses in the country.

Project plans for infrastructure, energy, land reclamation, housing, and roads should restore economic stability and make growth more inclusive. Job growth is anticipated, and increased government investment in education and health should improve the employability for people of working age.

Finally, significant changes to laws and regulations concerning bankruptcy, investment, and corporations are planned, as are reforms to hiring practices.

The parliamentary elections slated to take place later this year should not negatively affect Egypt’s economic growth and social inclusion gains. Prime Minister Mahlab asserts, “When you have a clear strategy, which is designed to face the real challenges of the country, and the people of the country support the strategy, the backbone of the strategies will not change.”