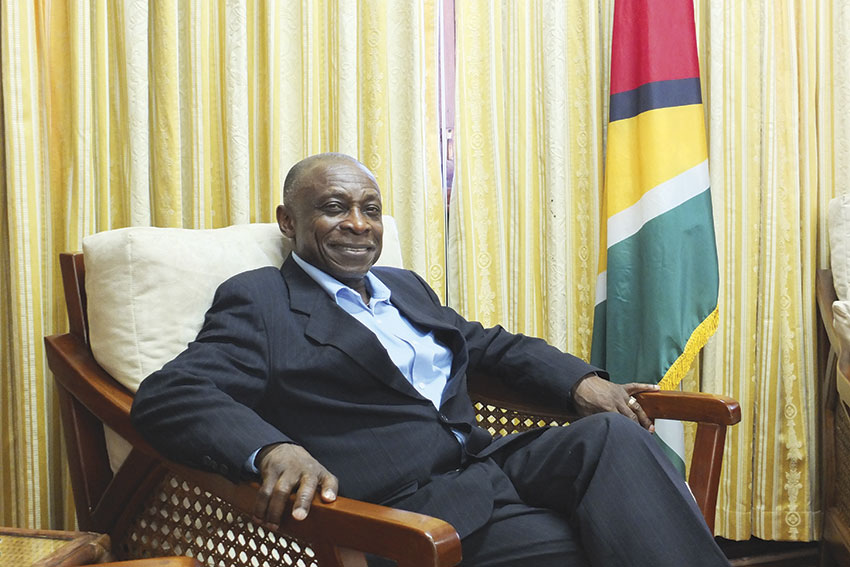 With its massive worldwide diaspora, the thousands of Guyanese living abroad play a critical role in the affairs of their native country. Because of its close links with the United States and Canada, many of Guyana’s citizens have sought work abroad, but remain closely connected with their home country. Guyana’s emigration rate is among the highest in the world – more than 55% of its citizens reside abroad. As a result, Guyana receives millions of dollars each year in the form of remittances –  cash that is sent home to relatives and friends from their countrymen abroad. As a share of its total economic output, Guyana is one of the largest recipients of remittances among all Latin American and Caribbean counties.

Although this cash flow represents a vital source of income for Guyana’s economy, the emigration of skilled workers deprives Guyana of professionals in healthcare and other sectors that are critical in building up a diversified economy. More than 80% of Guyanese nationals with tertiary level education have emigrated. Because of this dynamic, Guyana suffers from a chronic shortage of skilled labor. But while this has hampered growth in the past, the current government is looking to create a more attractive and dynamic economic environment to entice more skilled and educated workers to stay home, as well as channeling the existing flows of remittances into productive investments.

“We have a large diaspora. Our population is about three-quarters of a million,” explains President Granger. “But there are about 250,000 Guyanese in Canada alone, and there are probably about some 150,000 in the United States. The diaspora is larger than the population in Guyana, there are more Guyanese living in North America than Guyanese living in South America. And all of them also welcome this new government.”

Guyana’s Ministry of Foreign Affairs will be at the forefront of this outreach effort. “Remittances are a major source of income for the country and at one stage it was as high as 17% of GDP,” explains Foreign Minister Carl Greenidge. “What we believe needs to be done now is to put in place the institutional arrangements and mechanisms that would provide some security for those who want to send remittances, so that they can channel their money towards fruitful investments in the housing sector and industrial development etc. And we are proposing to do that, so that we can capture these funds and at the same time contribute to growth in Guyana and also raise the level of optimism in this country.”

“We are going to reverse the reasons for their migration,” President Granger explains. “They might have left because there were no opportunities; we assure them that we are making Guyana a safer place, a safe destination for their investment. Many of them have matured while they were away; they have accumulated funds and they would like to come back to invest their funds.

“Remittances are a major source of income for the country and at one stage it was as high as much as 17% of GDP. What we believe needs to be done now is to put in place the institutional arrangements and mechanisms that would provide some security for those who want to send remittances. So that they can channel their money towards fruitful investment.”

“Guyana will be a safe place for them to come to. Many of them would like to come here because of the climate – they want to get away from the winter. That would also be a new frontier in terms of the fact that we do not have a very developed manufacturing sector – we will be able to bring back those skills and capital to develop the very areas of manufacturing which I said we need to develop.”

The President and officials from the the Ministry of Foreign Affairs have engaged with the community of expatriates to include them in their plans for the country’s future development. “I met with some of them in September and when I came back the first thing I did was send the Minister of Business with another team to reengage with the diaspora, particularly in Toronto and to some extent in Florida,” President Granger explains. “We have come up with many proposals, mostly small and medium-sized enterprises. They want safety; they want a liberal investment climate. Those are the two main concerns that they’ve articulated to me. And here they are going to be safe, and because they can make and keep their profits too.”

At the same time, the economic realities of Latin America have steadily shifted, with Guyana at the center of a movement toward regional cooperation. “We are one of the founding Members of the CARICOM Regional Integration movement. We played an active role in the development of the Lomé Convention which is what binds the European Union to the African, Caribbean and Pacific states, and we have been very keen to deepen regional integration across the language divide, the Iberian, English speaking and Dutch areas, and we will continue to press that in the years ahead. We believe in it because we believe that in this way the region will be able to make a name for itself and stand up high enough to rival the major states, certainly, in regional economic growth and integration.

As part of this effort Guyana has made significant progress in the area of good governance. “This administration committed itself to be a more inclusive Government, by looking at more effective ways of bringing the non-state actors and the non-governmental organizations into the arena of decision making, monitoring and planning of economic change in particular and that is what I think is going to happen in terms of the political changes for this government,” says Mr. Greenidge. “And this, I think has contributed enormously to a political environment that is propitious for more rapid rates of economic growth.