Article - December 18, 2013
With a 'one stop' investment centre, modern infrastructure and five star hotels and services, Khartoum is the country's hub of business and investor relations 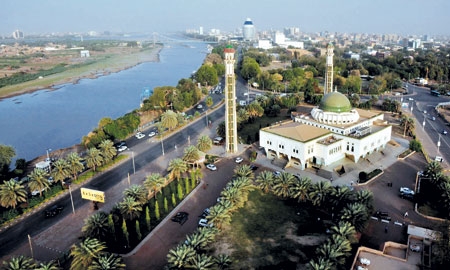 KHARTOUM HAS DEVELOPED DRASTICALLY TO BECOME A BUSINESS-FRIENDLY CITY
SHARE

Located at the confluence of the Blue and White Nile rivers, Khartoum is a surprise to those who visit for the first time. The Lonely Planet describes it as a “boisterous, modern, flashy city with an ever-increasing number of glass tower blocks altering its skyline” as well as an excellent museum with “breathtaking exhibits”, some fascinating souqs, Nile-side views, good facilities, hospitable people and a laid-back vibe.
Tourism facilities have improved recently, as Ghassan Dalal, General Manager of the Al Salam Rotana Khartoum Hotel, demonstrates.
“During the years, Khartoum has developed so drastically that a lot of four and five-star hotels in the city have been built, travel agencies have improved their services – they are now arranging city tours and packages especially for foreigners.
“There are also new roads in the city and better infrastructures, stability in electricity supply and better lighting and landscaping along the roads. Khartoum has surely become a business-friendly city,” says Mr Dalal.
The five-star Al Salam Rotana Khartoum Hotel, just 10 minutes from the airport and 15 minutes from the city centre, was recently named Best Airport Hotel Africa 2013-2014 by the African Hotel Awards.
The capital city of what was not too long ago the world’s fifth fastest growing economy according to The Economist, Khartoum has not slowed down in its efforts to continue driving the nation forward.
"I think that what you see in the media about the investment environment in Khartoum is totally different from the reality that can be experienced on the ground,” comments Osama Faisal Al-Sayed, Acting Investment Commissioner of the Khartoum State Investment Encouragement Commission (KSIEC).
“The investment climate that you find here is surprising. From 2011 to 2012, we have witnessed an incremental increase of 28 per cent in investment applications. This is the sort of thing that you would never find in any other city in the world.
“You might find an incremental increase of 5 to 10 per cent, but it is not common for a city to get 28 per cent more than what it had the previous year.”
The investment process was simplified two years ago, when the government passed an Investment Act to restructure its investment system.
Today, each of the 18 Sudanese states has its own investment authority, whilst the KSIEC is the “mother for all the investment bodies in the states,” explains Mr Al-Sayed.
He goes on to say that KSIEC – which offers a single-window service – is targeting four kinds of investments: food security, job creation (in tourism-related projects, for example), export-oriented projects and infrastructure.
Khartoum is Sudan’s second-largest city, yet its tripartite metropolitan area also encompasses Ondurman, the most populated municipality and national centre of commerce, and Khartoum North. The three are divided by the Nile rivers, with the moon-shaped Tuti Island located directly in the middle.