G7 Summit puts Mie on the map, and in the money

Mie Prefecture – an area of Japan synonymous with the country’s ancient culture and traditions – has been chosen to host the G7 Summit, with the event sent to create a direct economic impact of more than 50 billion yen 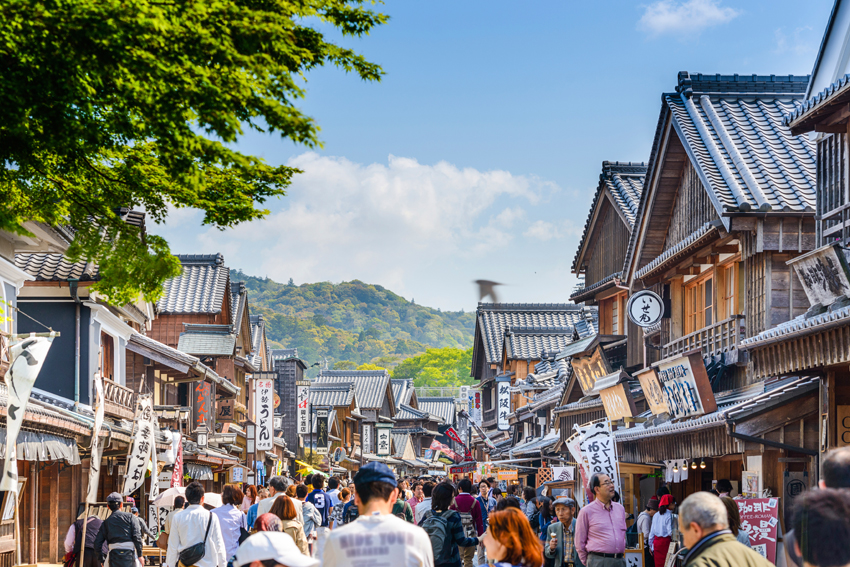 CROWDS WALK ON THE HISTORIC SHOPPING STREET OF OHARAI-MACHI, WHICH IS THE OLD APPROACH TO THE INNER SHRINE OF ISE AND FEATURES RECONSTRUCTED BUILDINGS IN THE TRADITIONAL STYLE OF THE EDO TO EARLY MEIJI PERIOD
SHARE

Eight Japanese cities including Hiroshima, Kobe, Nagoya, Sendai, Niigata, Karuizawa and Hamamatsu, bid to host next year’s G7 Summit, but after months of careful consideration, Japanese Prime Minister Shinzo Abe announced that the Ise-Shima region in Mie Prefecture would host the 42nd edition of the meeting, which will be held on May 26-27, 2016, at the famed Shima Kanko Hotel.

Prime Minister Abe has a long and special history with the area and with the Shima Kanko Hotel itself, which he visited frequently as a child. Famous for pearl farms and female sea divers (known as ama) who catch abalone and other varieties of shellfish, Mie Prefecture is punctuated by Jingū, or the Grand Shrine of Ise – a 2,000 year old shrine dedicated to the ancestral deities of the Imperial family.

Mr. Abe is known to be especially fond of the shrine, which for millions of Shinto Japanese is a sacred site of pilgrimage and embodies the heart Japanese tradition. A widely publicized member of the Shinto Seji Renmei, or the political wing of the Association of Shinto Shrines, the Prime Minister is known to visit the shrine every year after the New Year holiday.

He is believed to have chosen this setting for the G7 Summit in a bid to promote the mission of the Seiji Renmei, which is to preserve Japan’s culture and traditions so that they may be passed on to future generations. “I hope world leaders will feel the rich culture and tradition and beautiful nature,” said Prime Minister Abe when he made the announcement that Mie Prefecture and Ise-Shima were chosen to host the Summit.

The Prime Minister was also likely influenced in his decision to choose Ise-Shima by the fact that it boasts excellent security – closing down the two bridges on the island of Kashikojima means that the G7 venue will be completely isolated from the main island – but it is nonetheless well communicated with the rest of the world through Chubu International Airport.

Yet in addition to cultural and logistical advantages, Eikei Suzuki, the Governor of Mie Prefecture, also believes that Ise-Shima is a prime host for the Summit because it is located in an exemplary Japanese prefecture. In addition to having the lowest unemployment rate in Japan, Mie Prefecture has lowest number of bankrupted enterprises and the highest GDP. “Abenomics has had a very favorable impact here,” he says. “We have excellent traditions and technology, and we would like to represent this to the world.”

Governor Suzuki explains that the direct economic impact of the G-7 Summit will be around 51 billion yen ($425 million), resulting largely from infrastructure projects. However, the indirect impact – including tourism – has been estimated by some analysts to hover closer to 175 billion yen.

Tourism, according to Mr. Suzuki, is among the key pillars of achieving sustainable economic growth in the prefecture, which has already seen its visibility significantly boosted by collaboration with Trip Advisor and other internet-related services. “We would like to communicate more globally,” says Mr. Suzuki, “and in addition to Tokyo, Osaka, and Kyoto, we would like to put Mie Prefecture on the map.”

With more than 70 golf courses, the prefecture is already well positioned to attract global tourism, although luxurious greens are not the only thing it plans to build its economy around. According to the mid-term economic forecast released by the Japan Center for Economic Research last year, Mie Prefecture is expected to achieve the highest economic growth rate by 2025, and it already produces more manufactured goods per capita than any other region of Japan. The governor has very proactively established partnerships with foreign partners in the aerospace, electronics, IT, automotive and petrochemicals industries, and has also established a unique incentive program under which foreign companies that invest more than 500 million yen can get a 20% subsidy on their investment.

“Both tradition and innovation can coexist here, and I think that is one of the strengths of Mie Prefecture,” says Mr. Suzuki. In order to stimulate prolonged investment from smaller companies, he has also borrowed the airline mileage system model so that companies can accrue investment points over time, and benefit from the same 20% subsidy once they have hit the 500 million yen investment mark.

The G7 Summit in Mie Prefecture will be attended by the leaders of seven nations (Russia is being suspended), and include Justin Trudeau of Canada, François Hollande of France, Angela Merkel of Germany, Matteo Renzi of Italy, David Cameron of the United Kingdom, Barack Obama of the United States, and Jean-Claude Juncker and Donald Tusk of the European Union. Japan last hosted the G7 Summit in Hokkaido in 2008.