At the end of May, Japan hosted the annual G7 Summit in Ise-Shima against a highly fragile global backdrop, taking over the presidency of the group at a very uncertain moment for the world economy 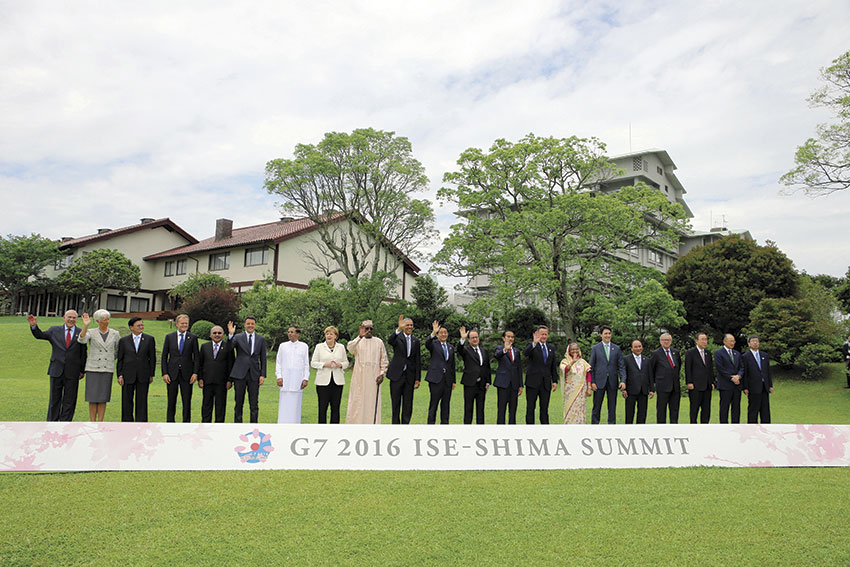 G7 LEADERS POSE FOR A PHOTOCALL AT THE ISE-SHIMA SUMMIT, WHICH TOOK PLACE IN LATE MAY
SHARE

As it works to strengthen its position in the international economy, Japan is prepared to take the lead on a number of the world’s greatest challenges, from the economy to climate change and public health.

The country’s own long-term economic problems led to the adoption of ‘Abenomics’, Prime Minister Shinzo Abe’s three-pronged strategy based on monetary, fiscal and structural reforms, in December 2012. Concluding the two-day Summit, Mr. Abe called on G7 leaders to coordinate an Abenomics-style approach to address the global economic challenges, declaring that, “Abenomics must go worldwide.”

In a joint declaration, G7 leaders announced their commitment to expanding free and fair trade, through the implementation of free trade agreements such as the Transatlantic Trade and Investment Partnership, the Trans-Pacific Partnership, and the Japan-EU Economic Partnership Agreement. Free and fair economic zones, Mr. Abe said, would enable  “everyone, including women, to fulfill their potential”.

Leaders also pledged to invest more in infrastructure, as a means “to support the growth of developing countries and to raise demand worldwide,” said Mr. Abe, who added that, “Japan will be on the frontline to take actions in order to contribute to the global economy.” At an event shortly after the G7 Summit, the Prime Minister announced that Japan would take the lead by investing $200 billion in infrastructure around the world over the next five years.

Aside from the global economic challenges, the G7 delegates discussed issues such as the refugee crisis, terrorism, women’s rights, corruption, global health and climate change.

In line with the Ise-Shima Vision for Global Health, the G7 will promote Universal Health Cover- age (UHC) as well as take stronger leadership in reinforcing response to public health emergencies and antimicrobial resistance. Particular emphasis will be put on research and development (R&D) and innovation to advance global health, an area in which Japan is already pioneering, with Japanese biomedical companies conducting R&D in fields such as gene and cell therapy to fight disease.

The issue of global warming had particular pertinence at the Summit this year following the signing of the Paris Agreement on climate change at the COP21 Summit in December. G7 leaders reaffirmed their pledge to tackle climate change, by supporting innovation in green energy technologies and encouraging clean energy and energy efficiency.

From hybrid cars to solar energy, green technology is another area in which innovative Japanese companies have put themselves at the forefront. “I fully agree with the fact that the G7 has the environment as one of their main topics,” says Yasumasa Emori, President of Nicca Chemical Co. “I think the strength of Japanese companies is what we have catered to, and we have moved with the demand of society. Japanese companies have worked to find solutions whenever there are problems.”

A major problem for Japanese firms themselves has been the dwindling domestic market. This is why an increasing number of them are looking to gain a stronger foothold on the global market. And by the time it hosts the G7 Summit again in 2024, Japan expects to have a much greater influence on the international economy, and its innovative companies to be on the frontline of global challenges such as climate change, public health and food security.

But before the G7 Summit in 2024, Japan will host the Rugby World Cup in 2019 and the Olympics in 2020. These major events should help to further boost its inbound tourism numbers, which reached a record 20 million last year.
“Tourism is very much a pillar of Abenomics,” says Osamu Shinobe, President and CEO of All Nippon Airways.

“Three years ago, Japan was thinking about celebrating itself for achieving 10 million inbound tourists. Now we’ve reached 20 million. So to support Abenomics’ tourism pillar we need to enrich our infrastructure to entertain tourists from abroad so we can increase inbound passengers by having major events as a trigger, such as the Olympics  and Paralympic games in 2020, and Rugby World Cup in 2019.”