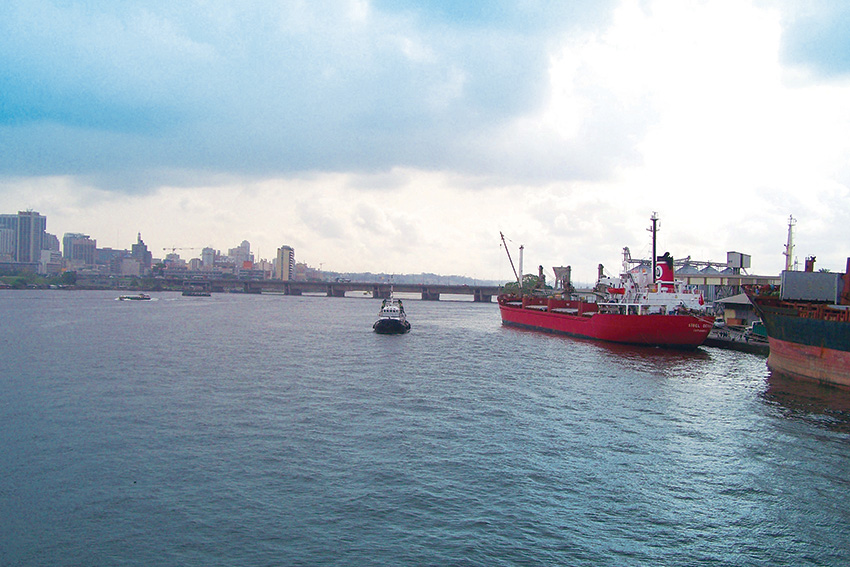 Côte d’Ivoire’s economic strategies over the past five years have seen the country’s prosperity surge and there are now plans to capitalize on this by improving not just domestic trade but also international exports.

A key factor in this plan is the increasingly influential port at Abidjan, once one of the African country’s most important industrial links. Although the impact of the political and military crisis that hit the country impacted operations at the port, significant investments are now being made that are once again enabling Côte d’Ivoire government to put the facility back on the regional map.

Hien Yacouba Sie, Managing Director of Abidjan Port Authority, is quick to point out the historical importance of the port, although he also admits that it has suffered from a lack of investment in more recent years. “During the 1980s the state’s resources, which declined following the drop in the cost of raw materials and other socio-political problems, meant that the port suffered from a lack of investment,” he explains.

The result was that exporters from countries that may once have used the Abidjan facility shifted their trade to ports in neighboring countries such as Ghana, Togo and Benin. The return to prosperity in Côte d’Ivoire, however, has in more recent years helped to prompt growing interest in Abidjan’s facilities that has been further bolstered by a sustained period of political stability and the growing economic fortunes of the country.

“We have an economy that is very strong and when calm returned after the arrival of President Ouattara, we were able to regain our position and catch up,” says Mr. Sie. Transport infrastructure, particularly road and rail links, were improved and the port itself is now in the process of being renovated to allow ships from across the world to dock.

“One of the most important projects is the ability to accommodate larger vessels,” says Mr. Sie. Previously, ships carrying more than 4,000 containers could not enter because of the depth of local channels, but as part of the widespread investment in the facility this limit is being raised four-fold to ships with capacity for 16,000 containers.

“We are working to accommodate all the ships that come to the coast with a project on the Vridi Canal,” Mr. Sie says. Other improvements include the construction of a second container terminal that will ratchet up Abidjan’s container capacity. Construction began in 2015 and will take almost 4 years to complete.

Further upgrades of the port’s related infrastructure will also provide more efficient operations, particularly improving traffic flows and expanding the industrial space around the facility itself. Modern fishing terminals are being developed through the issuance of a 29-billion-franc (approx. $47 million) bond and the importance of a port with wide-ranging capabilities will benefit the country on a variety of levels, according to Mr. Sie.

“The most important industrial zone will be in the port area and many jobs will be created there,” he says. “The port has an important role in the economy, the health of the country depends on the Port of Abidjan. “The port has an important role in the economy, the health of the country depends on the Port of Abidjan. We will also have five hectares of industrial space that will allow for refrigeration, and this all provides employment. Plus, we also want to create an ore terminal, because mining in Côte d’Ivoire is set to grow”

“We will also have five hectares of industrial space that will allow for refrigeration, and this all provides employment. Plus, we also want to create an ore terminal, because mining in Côte d’Ivoire is set to grow.”

While Mr. Sie has great ambitions for the Port of Abidjan, there is no doubting that it faces intense competition as neighboring countries vie for dominance of the international shipping trade. With countries in the region experiencing rapid growth, established ports – such as Tema in Ghana and Dakar in Senegal – are set to grow further, but Mr. Sie says “the economic prosperity of Côte d’Ivoire means that Abidjan is particularly well placed on both a domestic and global front.”

“When a state creates a port in the first place, it is for its economy,” he explains. “We need the port to grow to accommodate the needs of the economy in terms of exports and imports. This is the principal challenge, and the Port of Abidjan was created primarily for that. And as the economy is growing at almost 10% per year, there is a pressure for us to grow because since the 1980s there has been little investment.”

Mr. Sie adds that Abidjan will also be able to accommodate more vessels than its near competitors and says cooperation with Angola is helping both countries to escape from the ravages of their respective conflicts and emerge economically buoyant. Côte d’Ivoire’s well-educated workforce is a key asset for the country while Angola’s more recent economic wealth derived from oil reserves is enabling both countries to mutually benefit.

Wider strategic relationships are also benefiting Côte d’Ivoire and its Abidjan port facility in particular, such as with the Port Management Association of West and Central Africa, which is designed to encourage strong cooperation with similar facilities across the region and improve the competitiveness of the entire sector.

“There is a will amongst many African ports in the region to improve port management processes,” Mr. Sie explains. Comparisons between both the technical and financial elements of each country’s respective port operations help to generate improvements, although the importance of an efficient, functioning sector has far greater repercussions for the wider Ivorian economy.

“For economies, it is important that the ports are not too expensive because when they are, it is the consumer who pays, and in our country the population’s purchasing power is not great,” says Mr. Sie. “When there is inflation in terms of cost, it inevitably leads to impoverishment. The policy of the ports can help to ensure that this does not happen.

“At the same time the ports are the service delivery sites and that is a cost. It brings back the financing of political problems. There are ports where states have funding, where the state has subsidies and where the state does not intervene. All these (different models) can have repercussions.”

The key, he adds, is that all the players – from port authorities to private companies, the state and subsidized operators – must work to together to some extent to ensure a greater good for all.

“This is a world where everyone defends his interests, but our interests are interdependent. If each stifles the other, he cannot escape,” adds Mr. Sie.

Indeed, the port authority’s general director is perhaps more aware than most of the importance of cooperation, as he is also vice-president of the International Association of Ports and Harbors, a global trade body for the industry. One of its key initiatives has been to focus on the creation of so-called smart city harbors that integrate efficient port operations with the wider economic and social communities around it.

“Many cities have a lot of poor people and many of them tend to go to the port area to get by,” Mr. Sie says. “That creates significant pressure on the ports and can lead to insecurity and fragility issues surrounding the goods that are getting shipped. If we do not manage the situation it can become a weakness.”

Issues such as the theft of goods within the confines of ports is an Africa-wide problem, Mr. Sie adds, and the ramifications affect not just the facility itself, which has to cover the costs, but also operators who face higher insurance premiums, for example.

While some European countries have over recent years used their own resources and benefits from EU programs to transform some of the continent’s regional ports, countries such as Côte d’Ivoire find financing harder to come by. The key is to create synergies between both towns and their respective ports, Mr. Sie explains, with cash flows of both outgoing taxes and incoming financial support being created to provide a better environment that can provide economic prosperity for both parties.

Côte d’Ivoire is also set to benefit from investments in technological developments, which are helping to improve operations and increase the port’s efficiency, with the first step being to computerize all aspects of the Abidjan facility’s operations.

With such development, the potential of tourism to the country’s economy is also coming more clearly into focus. The hospitality sector is growing rapidly in Côte d’Ivoire but Mr. Sie says under capacity is holding back further growth – a situation that the Port of Abidjan could help to improve. “The potential is enormous. There are plenty of investments in the sector and that will attract people,” he continues, adding that there are proposals to create a cruise terminal.

The main efforts at present, however, are directed towards developing Abidjan port’s facilities for both domestic and global trade – particularly with major economies such as the U.S. Links between the world’s biggest economic powerhouse and Côte d’Ivoire have been developing rapidly over the years, manifested most recently in the extension of the African Growth and Opportunity Act to 2025. It provides far greater market access for qualifying countries in the sub-Saharan region, and means the Port of Abidjan is set to become a lynchpin in the future growth for its exporters.

Substantial challenges remain, Mr. Sie adds, not least ensuring that the passage of American ships is secure, and to that end U.S. shipping experts visit the country several times each year to provide guidance and advice. With such international expertise, in addition to local investment and regional cooperation, the Port of Abidjan aims to deliver greater prosperity for Côte d’Ivoire and a gateway for trade that can benefit the entire sub-Saharan region.