For world-beating gastronomy with ‘mucho gusto’, head to Peru

Around the globe, Peruvian cuisine is bang on trend, tantalizing international taste buds and drawing the attentions of enthusiastic foodies and food industry professionals alike. As a reflection of the blessings it can being to the gourmet’s table, for the past three years in a row, Peru has been crowned the World’s Leading Culinary Destination 2012, 2013 and 2014 at the World Travel Awards, the ‘Oscars’ of the travel industry, and is a strong contender to win the 2015 title. 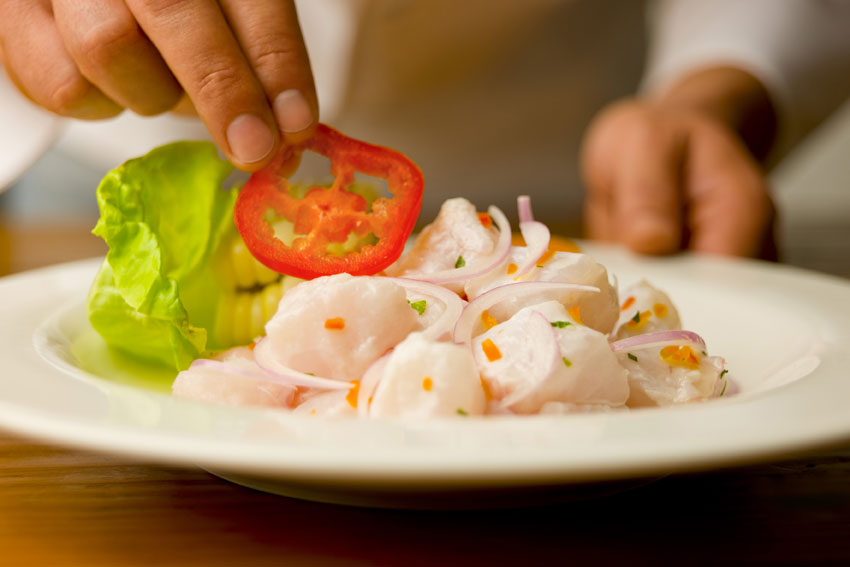 A SEAFOOD DELICACY THAT HAS BECOME PART OF PERU’S HERITAGE AND GAINED WORLDWIDE RENOWN, PERUVIANS HONOR THEIR MOST FAMOUS DISH EACH YEAR ON JUNE 28 WITH NATIONAL CEVICHE DAY, OR DÍA NACIONAL DEL CEBICHE
SHARE

Further confirmation of the country’s rising standing in global gastronomic circles will be evident in April 2016, when Peru hosts the 2nd World Forum on Food Tourism. Sponsored by the World Tourism Organization (UNWTO) and the Basque Culinary Center (BCC) of Spain, the event is expected to draw around 200 participants, among which will be leading tourism and culinary experts. Its aim is to promote respect for tradition, and the culinary experience food tourism can offer people all over the world. The inaugural World Forum on Food Tourism took place in April 2015 in San Sebastian, Spain, where among the topics under discussion included the important role food plays in tourism experiences and how best to develop the gastro-tourism sector.

Over the past decade, Peru’s tourism industry has seen steady annual growth and has its emerging culinary scene to thank in part, as rising numbers of visitors come in search of an authentic, refreshingly spicy ceviche washed down with a velvety pisco sour and more. Foreign Trade and Tourism Minister Magali Silva confirmed recently that a total of 2,007,141 tourists arrived in Peru between January and July 2015, representing an 8.4% increase on the same period in 2014. International promotions, such as the Peruvian Gastronomy and Tourism week being held in Sao Paulo in October and organized by PromPerú (the Peru Export and Tourism Promotion Board) and Peru’s Trade Office (OCEX Sao Paulo), are helping to spread the message.

The events are far from isolated celebrations of Peruvian culture and gastronomy abroad, with similar occasions regularly popping up around the world. They have all helped put Peru, and Lima in particular, firmly on the gastro-tourist trail, and inspired the opening of more and more Peruvian restaurants overseas.

Many would attest that it’s high time the Peruvian flair gained the international recognition it deserves. Over the years, the nation’s rich heritage has infused its dishes with unique fusions of flavors and original creativity from the cultural exchanges of Peru’s Spanish, African, Chinese, Japanese and Italian ancestors, with various other nationalities also adding their influence to the cultural pot.

In more recent times, its wealth of nutritious homegrown fare has had superfood fans all of a flutter, as the global clamor for delicious ingredients packed with above-average health benefits is soaring. Rich in nutrients, antioxidants and phytochemicals, such in-demand items increasing Peru’s presence on international supermarket shelves, and in turn boosting its export revenues annually, include quinoa, chia seeds, sacha inchi seeds, camu camu, aji peppers, lucuma, yuca, avocados, artichokes, beans and papaya. In addition, more than 3,000 types of potato and 200 kinds of corn are grown in the fertile soils of the Andes, while the Amazon rainforest is the source of thousands of tasty fruits, nuts and seeds.

Building international awareness of Peru’s cuisine, and its tourism offer, has taken a great deal of work on effort on the part of the authorities. In 2003, the country’s brand had not even begun to exist, so PromPerú embarked on an aggressive promotional campaign, starting in Latin America and Spain, then taking it to the rest of Europe and the United States. The campaign provided information to potential foreign tourists about the wonders of Peruvian history, archeology, culture, landscapes, biodiversity, and food – the latter being a completely new topic at the time.

The litmus test of this drive came in 2004 at the prestigious Madrid Fusion food festival held at the Hotel Ritz in Madrid. PromPerú invited pisco connoisseur Johnny Schuler and chef Rafael Piqueras to represent Peru and word quickly spread about the country’s then relatively unknown pantry of delights. PromPerú repeated this success at the event in 2005, and identified Spain as the ideal gateway to seducing European palettes with Peruvian cuisine. The same year Peru’s national food brand Mucho Gusto was born and “Peru, mucho gusto” became the country’s slogan at Madrid Fusion 2006.

Lima held the country’s first Peru Mucho Gusto Peruvian food fair in 2008, with regular food fairs held around the country under the same banner and always prove to be crowd-pullers  – according to the Ministry of Foreign Trade and Tourism (Mincetur), more than 13,000 people came to the fair held at the Pisco boardwalk between May 1-3, 2015, to taste around 18,000 regional seafood-based dishes.

The inaugural Mucho Gusto fair paved the way for the Peruvian Society of Gastronomy (Apega, founded in 2007) to hold the first Lima International Gastronomy Fair – Mistura – on September 26-28, 2008. The success and popularity of this annual event has seen it mushroom into becoming the country’s most popular festival and most the important gastronomic fair in Latin America.

A true celebration of Peruvian cuisine, Mistura showcases the best the country has to offer, from its top chefs and farmers to its most creative and unique producers. This year, the 10-day event held on September 4-13, 2015, attracted 384,553 people, about 20% more than in 2014. Among the attractions, visitors to the Great Market had more than 320 producers at 182 stalls selling some of the country’s finest wares.

Numerous international accolades bear testament the quality of Peru’s gastronomy, and its restaurants feature among rankings of the best in the world. As the nation’s food industry develops further and creative juices continue to flow, the culinary melting pot in Peru looks set to have even more influence on the global gastronomic mix and consolidate its reputation as the world’s best culinary destination.