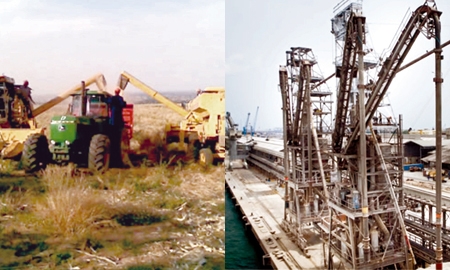 Flour Mills of Nigeria Plc was built to produce flour. After Nigeria declared its independence in 1960 from Great Britain, Flour Mills increased its daily capacity in its Apapa plant in Lagos tenfold to 6,000 cubic tons. Furthermore, over the years, Flour Mills has created several related business segments. Amongst them is its “golden” trademark of pasta and noodles. Under the trade name Agro-Allied Flour Mills, it also produces rice and cassava flours, sugar (Golden Sugar), glucose and cooking oils. Since 1997, under the name Golden Fertilizer Flour Mills, it has imported and distributed fertiliser nationwide.

At its two locations in Kajobi and Sunti, Flour Mills produces corn, soya, rice, cassava, sugar cane and palms. The soya and corn fodder are produced by Premier Feed Mills Company Ltd and are distributed under the trademark Top Feeds.

Flour Mills is also active in the transport and infrastructure branches. Burnham Cement imports and distributes cement, which has been already used for the construction of many buildings, bridges and streets in Nigeria. Flour Mills owns a cement joint venture with the Swiss company Holcim and the French firm Lafarge in Mfamosing, in the Cross Rivers State. It also possesses a trucking company, which currently has 500 trucks. Golden Transport Company Ltd has ambitious plans to double its fleet.

Flour Mills is also present in the shipping sector. Since 2005 the company has had its own dockside terminal, known as Apapa Bulk Terminal Ltd (ABTL), for which Flour Mills was provided with share capital amounting to N1 billion ($635 million). The port is equipped with several storehouses. As part of its expansion plans, ABTL is studying to build train access to the storehouses.

In November Flour Mills was authorised to take over the majority of Nigerian Bag Manufacturing Company, a sack producer, also known as Bagco. With its monthly capacity of 32 million sacks and bags, Bagco has become Nigeria’s biggest producer in this area.

Flour Mills has recently penetrated the electricity market. Its mills in Apapa Port have 11 gas-fired generators with a capacity of 30MW. Flour Mills also has a 30MW diesel-run generator in Apapa just in case the gas generators fail or have to be disconnected.

According to Flour Mills’ General Manager Chief Emmanuel A Ukpabi, the company is already producing more electricity than it consumes. Flour Mills plans to introduce the excess of power capacity into the regular Nigerian electricity supply system and to sell it to municipalities. According to the company’s website, the different business branches are all “profitable and give Flour Mills a competitive advantage in mobility, efficiency and services.”