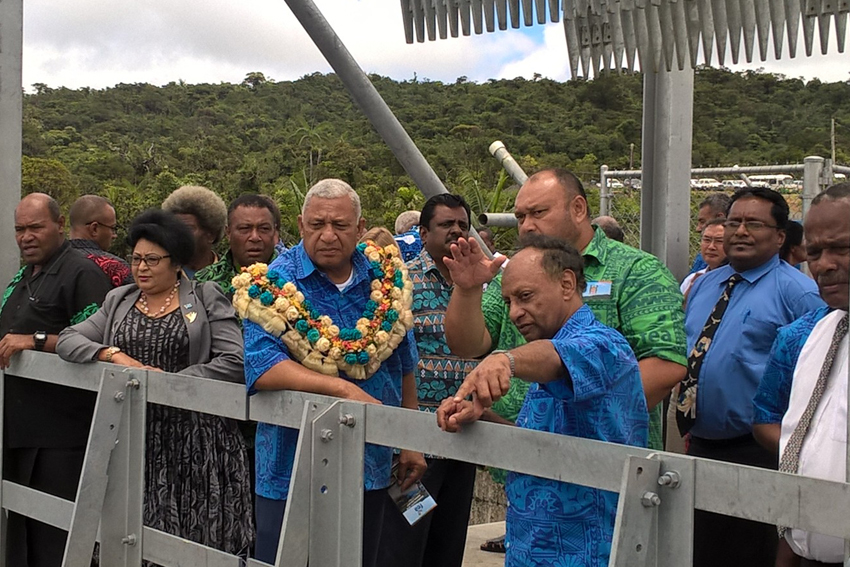 Fijian Prime Minister Frank Bainimarama will lead a 40-member delegation from his Pacific nation to the UN Climate Change Conference of Parties (COP21) in December 2015 with a stark message: Fiji is playing its part in reducing carbon emissions; it is time for industrial nations to play theirs.

Addressing guests at the official opening of the Wainisavulevu Weir Raising project on November 3, 2015, the Prime Minister announced that Fiji had set a target of reducing its carbon dioxide (CO2) emissions by 30% by 2030.

This target has been set despite the fact that the average Fijian generates almost five times less carbon than the average person in the rest of the world. Fiji’s per capita carbon emissions in 2013 was an estimated 1.5 tons, compared to a global average of 5.6 tons.

As the Prime Minister points out, “It is clearly the industrial nations, not us, who are largely responsible for the alarming rise in global temperatures that threaten our way of life here in the Pacific. We haven’t caused the problem and unlike the nations who benefited from the industrial revolution, we certainly haven’t got rich on carbon. Yet along with the other small island developing states and low-lying areas of the world, it is we who are having to carry the greatest burden.”

Pacific islands are on the front line in the battle against climate change. Whole nations consisting of low-lying atolls are at risk of being swamped by rising sea levels, whilst vast areas of fertile coastal land could be lost. Island nations face dramatic revenue loss from agriculture, water resources, forestry, tourism and other industrial sectors.

Fiji’s aim of reducing its carbon emissions by 30% over the next 15 years has been tabled for COP21 as Fiji’s Intended Nationally Determined Contribution, or INDC. Taking place in Paris from November 30 to December 11, COP21 aims to create a new international climate agreement. In preparation, countries have agreed to publicly outline what post-2020 climate actions they intend to take under the new agreement, known as their INDCs. Fiji has also prepared a 55-page document for the conference that underlines the country’s strong stance against climate change.

Prime Minister Bainimarama notes that Fiji’s INDC is an enormous commitment for a nation of their size and stage of development. “Proportionally, it is a much bigger sacrifice than a 30% commitment by any industrialized nation, because we are starting from such a low base with almost negligible carbon emissions in the first place. In fact, Fiji’s total share of global emissions is 0.004%. As I say, not our fault but we are still prepared to share responsibility,” he said.

Of this reduction objective, 10% is unconditional, as the country intends to implement its Green Growth Framework using available domestic resources. The remaining 20%, which is estimated to require US$500 million in investment, is conditional on the availability of external funding.

Fiji’s INDC is focused specifically on its energy sector. By 2030, Fiji aims to generate 99% of its electricity needs from renewable sources, up from around 60% in 2013.

“I am proud to say that as Fijians, we are meeting the challenge head on,” Prime Minister Bainimarama said. “Our target is responsible, it is achievable and it is fair. It is certainly the best that we can do within the constraints we face as a developing country and the responsibility we have to our own people. Fiji is convinced that by taking a responsible development path, we can improve living standards and still meet our international obligations.”

Mr Bainimarama has emerged as a figurehead for Pacific nations as they work to establish a united front against climate change. In September 2015, the third Pacific Islands Development Forum (PIDF) summit was convened in Fiji’s capital Suva. This resulted in the Suva Declaration, which, among other things, called for the 2015 Paris Declaration to be a legally binding protocol that is committed to keeping average global temperature rises below 1.5ºC, rather than the 2ºC that is currently on the agenda.