Article - April 30, 2014
With a vow to ‘earn to serve’, the Fauji Foundation has identified and entered a variety of industries and developed into one of Pakistan’s biggest commercial and industrial powers 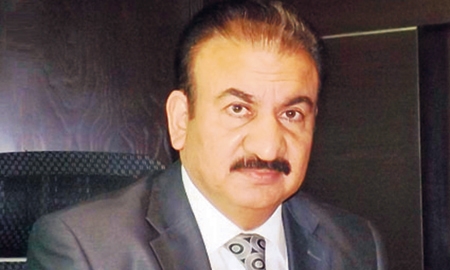 Today, Fauji Group operates in all major sectors of the economy such as fertilisers, cement, oil and gas, port terminal operations, banking, food, power generation and renewable energy. About 80 per cent of the conglomerate’s profits are then pumped into a massive welfare operation in the areas of health and education.

“Since our welfare projects’ expenditure increased by about 15 per cent in a year it is our compulsion that we must increase our business also at least by the same proportion,” says Lt Gen Muhammad Mustafa Khan (Retired), Managing Director of Fauji Foundation. “It’s a very hard task but we have met this squarely.”

Throughout its history, the foundation has been keen to diversify its business interests across sectors to mitigate concentration risk. Some of its most important – and long-standing – investments have been made within the energy sector, beginning with a majority stake in Mari Petroleum field in 1983. Mari Petroleum Company Ltd operates the second largest gas field in Pakistan from three main reservoirs.

The foundation’s activities in energy aren’t limited to the thermal power generation sector; it also ventured into wind energy in 2008-09 and currently has 150MW wind farms near Karachi in the wind corridor.

Fauji-owned FFBL and FFC are the conglomerate’s flagship companies and dominate the fertiliser industry. Fauji’s additional investments in the cement sector along with diversification in the renewable sector are now yielding better results.

The conglomerate’s first foreign direct investment took place in 2005, when it took a 50 per cent stake in Pakistan Maroc Phosphore – a joint venture with the Moroccan government’s office Cherifien des Phosphate. The deal secured a long-term and reliable source of phosphoric acid for Fauji’s fertiliser businesses and enabled the company to derive financial returns in a foreign currency, further diversifying the foundation’s revenue streams and connecting it to international business leaders.

Having established an array of businesses that stretched across numerous heavy industries, the Fauji Foundation decided to diversify its investments further by moving into the financial service industries. In June 2013 it took over a 72 per cent stake in Askari Bank, whose network comprises 281 branches.

Despite such an array of business interests, the Foundation’s Managing Director is keen to see further investments. In particular, he has highlighted an interest in working with foreign firms as Fauji Group looks to continue its commercial expansion enabling it to provide better welfare services to its beneficiaries in the areas of health and education.

“As a group we would like to do some national service by making our contribution in overcoming energy and food shortages. We will continue to improve and expand our educational system,” he says. “Presently we have some initiatives in the consumer products like meat, pasta and dairy, etc. In the fertiliser sector, we have some possible initiatives abroad, especially in Africa.”

Exploring these types of future business and investment opportunities has become a mainstay for Fauji Foundation, as it seeks to turn a profit to fund its altruistic work. With 60 years of experience in the ‘earn to serve’ endeavour, the organisation is indeed well placed to both expand its social services and target new sectors in order to guarantee its future success.