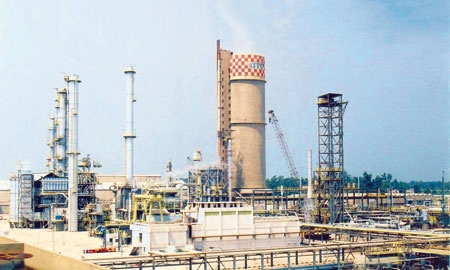 Fauji Fertilizer Company Limited (FFC) is the largest urea manufacturer in Pakistan and a leading national enterprise with a global outlook, effectively pursuing multiple growth opportunities and maximising returns to the stakeholders, whilst remaining socially and ethically responsible.

Incorporated in 1978, FFC now operates three world-scale urea plants with an aggregate design capacity of over 2 million metric tonnes per annum. FFC operates the largest marketing network in the country, with more than 50 per cent market share thanks to the nearly 3.5 million tonnes of fertiliser per annum it sells under its brand Sona, which means gold in Urdu.

In line with its strategy of diversification, the pioneering, Fauji-owned FFC Energy Limited is contributing 50 MW to the national grid through the country’s very first wind farm. Meanwhile, the recently acquired FFC Al-Hamd Foods Limited is setting up a state-of-the-art individually quick frozen (IQF) fruits and vegetables plant – the first of its kind in Pakistan.

FFC is listed on all three of Pakistan’s bourses and stands high amongst the largest corporate entities. FFC’s securities are one of the most actively traded scrips on the stock exchanges. It has figured prominently amongst the top 25 companies at the Karachi Stock Exchange (KSE) and has been declared first position thrice in the past two decades.

The company has also won recognition in the form of various corporate awards by prominent local and foreign corporate forums. In 2013, British industry analyst firm Plimsoll declared FFC as the 13th most profitable and 39th largest company in the world’s top 100 fertiliser manufacturers.

FFBL, whose vision to improve productivity and the lifestyles of millions of farmers nationwide, is Pakistan’s sole producer of DAP and granular urea and an extensive upgradation programme has greatly enhanced production capacity. The company’s path of growth in the market compels it towards new explorations and to constantly re-define business horizons. Furthermore, FFBL is firm in its commitment to observe the industry’s best practices.

The fertiliser company is listed in all three Pakistani stock exchanges and stands amongst the top 25 companies at KSE. However, FFBL is not one to rest on its laurels. Last year, it decided to diversify by venturing into the food business, incorporating two fully-owned companies – Fauji Foods Ltd (FFL) and Fauji Meat Ltd (FML) – thus widening its footprint in Pakistan and internationally.

FFBL, a member of the International Fertilizer Industry Association, is working with Human Development Foundation, a US-Pakistani NGO engaged in community development activities, namely in health and education. There are PKR 49.1 million (£280,500) earmarked for a project to transform “the under-privileged community of Ghaghar Phattak, Bin Qasim Town into a fairly modelled village in Human Development Perspective”. Moreover, FFBL also contributes more than PKR 5 million annually in the form of donations to philanthropists.

•Highest tax payer to the National Exchequer: US$1.12 billion (FY 2012/13)
•60% of dividend earnings paid to private shareholders
•CSR contribution by group companies: US$2.5 million
•Jobs for over 21,000 employees, including 5,000 ex-servicemen
•Foreign direct investment
in group companies