The wellbeing of a nation

Article - March 8, 2013
According to the World Health Organization, 347 million people worldwide have diabetes. In the Gulf area, the incidence of this chronic disease is high and growing 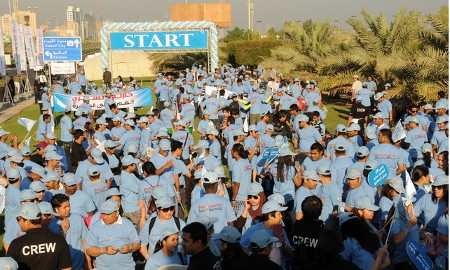 MORE THAN 6,000 PEOPLE JOINED THE THIRD ANNUAL BEAT DIABETES WALKATHON IN KUWAIT, ORGANIZED UNDER THE PATRONAGE OF THE DASMAN DIABETES INSTITUTE AND MINISTRY OF HEALTH
SHARE

Five of the six Gulf countries are included in the list of the world’s top 10 countries for diabetes incidence and prevalence. And sadly, it is Kuwait that leads the statistical race at third place globally, ahead of Qatar at sixth place, Saudi Arabia at seventh place, and Bahrain and UAE at eighth and 10th places respectively.
More than 21% of Kuwaitis suffer from the chronic disease. On the bright side, Kuwait is also the location of one of the world’s leading diabetes institutes, thanks to the vision of the late Emir who identified diabetes as one of the country’s most pressing issues in the early 2000s.
The Dasman Diabetes Institute, or DDI, was officially inaugurated in 2006 as a center for the diagnosis, treatment and research of diabetes and to offer other general healthcare services as well.
DDI’s Director General, Dr. Kazem Behbehani, is a world-renowned expert specialized in preventable infectious diseases, diseases of an ageing population, and pandemics. He attributes the rise in incidence of diabetes to an increasingly sedentary population.
“Before we used to play outside, but now children play on computer games, iPhones and iPads and go to the mall and eat fast food,” he explains.
It is precisely this change in lifestyle that has triggered Type 2 diabetes among Kuwaitis at an alarming rate, especially among children.
To counter this trend, the DDI’s facilities include a swimming pool and “keep fit lifestyle area” to encourage patients to get exercise. The institute also focuses on offering health education to the general population and training to health professionals and teachers.
“For prevention, we tackle a lifestyle change,” says Dr. Faisal Al Refaei, Medical Director of Clinical Services at DDI. “We tackle exercise. We educate the public and patients on the importance of exercise as part of the management of diabetes. So in a sense the focus is diabetes but we look around the disease itself before and after.”
In October 2011, the American Heart Association (AHA) accredited DDI’s Clinical Skills Center – which trains healthcare providers and the public with the latest techniques and methods used by the AHA – as a certified AHA Training Center.
In 2011, DDI launched a groundbreaking new children’s health initiative called “Kuwait Healthy Life Program” in cooperation with the Forsyth Institute in Boston.
In this project, saliva samples and the physical measurements (height, weight and blood pressure) of some 10,000 Kuwaiti children between the ages of 9 and 11 were evaluated in 2011 and will be compared to samples and measurements taken this year. The differences should determine which factors place children at risk for developing disease and ultimately help develop more effective ways to keep healthy children healthy.
This collaboration with the Forsyth Institute is just one of many partnerships and research collaborations DDI holds with international institutions.
“We work with about 20 universities. Each institution outside has a niche where they are the best in that area. Discoveries are made every day in thousands of places. The world has changed over the past 10 years with new discoveries and technologies. The world is connected. That is the basis of what we are applying here. We learn from them and they may learn from us,” says Dr. Kazem.
Harvard University, the University of Cambridge, the University of Oxford, and the University of Colorado are examples of the caliber of partnerships that DDI enjoys.
Research is certainly one of DDI’s strengths, and at its genome center researchers look at genes in relation to susceptibility to different diseases. They also study which drugs are suitable for some people and not for others, according to Dr. Kazem.
While Kuwait and the region’s diabetes problem is predicted to worsen over the next few years, DDI’s education programs and research should definitely curb the prevalence of chronic diseases in the coming generations.