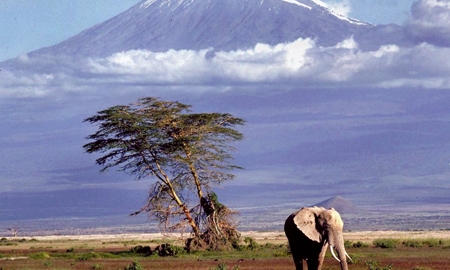 As Tanzania CELEBRATES its 50th anniversary of independence, the Hon Ezekiel Maige, Tanzania’s Minister of Natural Resources and Tourism, has stated that “Tanzania’s tourism continues to show tremendous growth”. The tourism sector is considered a significant part of Tanzania's economy, accounting for 17 per cent of the country’s gross domestic product (GDP), earning $1.3billion last year alone.

“Tanzania will be marking its 50th anniversary of independence as a year-long celebration,” said Minister Maige. “We are working closely with tour operators to create special 50th anniversary travel packages that will be diverse and affordable, enabling many people to experience Tanzania during this exciting period.”

Tourism is one of Tanzania’s fastest growing economic sectors, with 782,669 arrivals last year, representing a 9 per cent increase from 2009. In the US, Tanzania’s number-one source of tourism, tour operators report significant increases in bookings for 2011, 2012 and 2013. The result of this growth is an increased demand for expanding hotel capacity as well as flights, especially to Kilimanjaro International Airport, gateway to Mount Kilimanjaro, the Serengeti National Park and the Ngorongoro Crater.“Tourism is very important to us, but it is unfortunate that we, as a country, are poor so we cannot allocate all the money the sector requires,” said Minister Maige. “With a business, you have to put money in, in order to get money out, and as we put so little money into the tourism sector, we get very little out. I think the sector can do even better. The sector employs about 700,000 people directly and about 1.4 million indirectly. Regions like Kilimanjaro and Arusha are more than 60 per cent dependent on the tourism sector, so you can see how important it is. But because we put so little money into the sector people’s awareness of domestic tourism is still very low. That is why we really rely on foreign visitors. I think that if we put more money in, the country would have the potential to become the first or the second in Africa in terms of tourism arrivals. We put no more than $3 million per year into promoting tourism, whereas Kenya puts in about $40 million and South Africa puts in $40 to $50 million. So we are far below our competitors.

“We are also very limited with direct flights to our country, so most of our visitors come via other destinations. These are the stumbling blocks we have to address, but the sector has a lot of potential. As you know, we are a very environmentally friendly country, even with mining and other extractive industries.”

National Geographic magazine listed the Serengeti (where you can witness the great annual migration of millions of wildebeest) as a UNESCO World Heritage site and one of the top 50 “must-go-to-in-a-lifetime” places to visit and it is aspects such as these that the Tanzanian Tourism Board (TTB) are hoping to capitalise on.

“Tanzania boasts an unparalleled breadth and depth of natural wealth and cultural diversity, which if packaged and promoted aggressively could make tourism the number one foreign exchange earner in the country,” explains Dr Aloyce Nzuki of the TTB. “At the same time, Tanzania is very clear on its quality tourism approach and ‘Low volume – High value’ tourism policy. This sector represents a key priority for the economic development and the government aims to grow the industry from 17 per cent to 20 per cent GDP, and to increase the number of annual tourists to one million by next year. The TTB is the sole authority responsible for tourism promotion activities and we are currently developing a new marketing campaign aimed at projecting the abundant natural riches the country has been blessed with.”

As well as the activities the TTB are engaging in, Minister Maige is well aware of the importance of private-sector participation for the development of the industry, especially in light of the fact that the government does not have ample funds of its own to promote the sector. Public-private partnerships are critical to the ongoing success and development of this industry.

Minister Maige is also focusing on infrastructure, as the country needs to be competitive on a global level. “One of our very strong competitive advantages is peace and stability in the country; this makes Tanzania a great destination. But there are some challenges, such as infrastructure. That said, we have made a lot of improvements in the past 10 to 15 years. We are currently finalising the road infrastructure program to link all of our regional headquarters.

“We have improved our air travel infrastructure significantly; it is just unfortunate that we do not have so many airlines. We have done a lot to improve Mwanza Airport and we are getting direct flights from Kenya and we are just finalising the details to develop a terminal building which will make it a fully fledged international airport. We hope that we will get a good number of direct flights to Kilimanjaro, Dar es Salaam, Mwanza and Zanzibar. That will open up the skies of Tanzania and we hope that we will get more visitors as a result. There have been challenges, but I am very optimistic that the ongoing activities will change the situation significantly. We hope that we will see a very different country in the next five years in terms of tourism levels.”