The pact for mexico has enabled the country to successfully modernise its democracy and open its economy to the world, resulting in the creation of globally competitive industries. 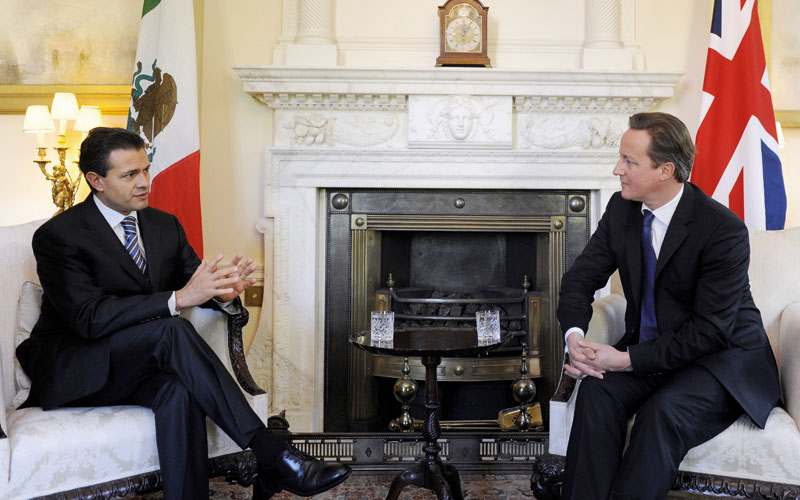 MEXICO’S STABLE ECONOMIC GROWTH, TOGETHER WITH ITS PACKAGE OF REFORMS, ATTRACT INVESTMENT FROM BRITISH COMPANIES AND HELP STENGTHEN THE ALREADY SOLID RELATIONSHIP BETWEEN THE TWO NATIONS
SHARE

As Mexico implements a set of historic reforms that are expected to create millions of jobs, increase incomes and attract tens of billions of dollars in foreign investment over the next several years, its recent economic and fiscal performance continues to evidence the kind of strength and leadership that make it one of the world’s top destinations for investing and doing business.

Optimism for Mexico’s future is widespread among analysts and policymakers, who predict that it will become one of the world’s leading economies in less than a decade, helping to propel a shaky global economy toward more resilient, widespread growth while cementing its leadership role in Latin America. Mexico’s GDP will increase next year to about 4 per cent and remain at this level for the next five years, according to the latest estimates from the International Monetary Fund (IMF). Despite lingering weakness in the global economy, Mexico will further benefit from building momentum in the US economy, as its export industries are to expand in size and scope. Critical to maintaining this trajectory, its economy is experiencing a balance of solid economic growth and low inflation. The IMF forecasts that average consumer price increases will drop from 4 per cent this year to 3 per cent in 2016 and remain there until at least 2019. Per capita income, meanwhile, will rise by more than 14 per cent during this same time period, giving a much-needed boost to workers.

“Over the next decade, Mexico will become [Latin America’s] largest economy and one of the emerging markets’ most dynamic,” according to a report from Norman Equity Research. Goldman Sachs analysts forecast that by 2020, Mexico will be the world’s seventh largest economy and will account for nearly 8 per cent of world GDP. Much of this can be attributed to the country’s strong leadership and the strategic decisions that they have made.

“Mexico’s strong fundamentals, sound policy framework and skillful macroeconomic management have allowed the country to deal with financial volatility and heightened risk aversion related to the exit from unprecedented monetary policies in major advanced economies,” the World Bank noted this year. “Mexican financial asset prices have been less affected compared to other emerging markets and financial markets have been able to cope without major liquidity pressures or the need for public intervention.”

Demonstrating this strategic leadership, President Enrique Peña Nieto acted swiftly after taking office to rally the majority of legislators in parliament to pass long-overdue structural reforms in the labour market, education system, financial, telecommunications and energy sectors, as well as in the government’s fiscal policy. Lawmakers from competing political parties put aside partisan differences to back an effort deeply rooted in the country’s future well-being and success.

“We came together from different factions with the conviction to breathe new life into the Mexican state, to give strength to its institutions, ready to change the political calculus of only thinking about ourselves and not thinking about society and our fatherland,” said Jesús Zambrano, President of the Partido de la Revolución Democrática (PRD), while Gustavo Madero Muñoz, President of Mexico’s Partido Acción Nacional (PAN) called the pact a “product of intense discussion, analysis and inclusion of the most important items on the national agenda in a multiparty dialogue to overcome the lack of agreement, with ample political backing.”

If the reforms are carried out as envisioned, Mexico could achieve a 6 per cent growth rate in the years to come, and the increased competitiveness of its industries could enable it to replace China as the world’s largest exporter to the United States by 2018, according to The Economist.

The unprecedented accord among the country’s political parties is known as the Pact for Mexico, and represents the crowning achievement of a process that, over the last three decades, has seen Mexico successfully modernise its democracy and open its economy to the world, resulting in the creation of globally competitive industries. Mexico has already become a manufacturing powerhouse. Among other major industries, Mexico is the world’s largest exporter of flat-screen TVs, is home to a burgeoning aerospace industry, and has steadily risen to become Latin America’s largest car manufacturer, and the fourth largest exporter of autos in the world. About one out of every four vehicles imported into the US comes from Mexico, with that share poised to rise, as Japan’s Nissan, Germany’s Daimler and South Korea’s Kia all plan billion-dollar manufacturing plants in the country.

As key industries surge, Mexico has been hamstrung by a stagnating energy sector, largely due to an outdated regulatory framework that stifled investment. Aiming to break this impasse, the 2013 Energy Reform opened up the sector to foreign investment for the first time in 75 years. It is just one of a package of changes and will allow the country to fully explore one of the world’s largest oil and gas reserves, estimated at 10 billion barrels of crude oil and close to 17 trillion cubic feet of natural gas, while maintaining state ownership over these resources. “Our goal is to make Mexico more open, productive and competitive, with sound public finances and skilled human resources; so we can play a more active role in the global economy and provide our people with a better quality of life,” President Peña Nieto emphasises.

Mexico’s emergence as a major economy presents opportunities to extend business and trade ties with partners across the globe. “Mexico is Latin America’s most open major economy already and the current batch of reforms will throw up exciting opportunities for UK firms in construction, energy and education,” says Lord Livingston, UK Minister of Trade and Investment. Currently, the UK is the fifth most important investor in Mexico, and aims to expand its presence there, as both countries have set the ambitious goal of doubling bilateral trade by 2015.

“On a macro level, we would like to see an update of Mexico’s trade agreement with the EU. Mexico and Britain already have a strong relationship, but we make up just 1 per cent of each other’s trade. We are both working to improve it. I believe that Mexico’s strong economic growth, and the package of reforms will help attract serious investment from British companies,” Lord Livingston adds.

Mexico’s strong record in favour of free trade and investment underpins this commitment. According to figures from the United Nations, Mexico ranks in the top 10 of countries globally in terms of the attractiveness of its investment climate, and boasts treaties with 44 countries that together account for 60 per cent of the world’s GDP, making it the world record holder for signing free trade accords.

“Today, the world is beginning to value the optimal and favourable conditions in Mexico for investment,” says President Peña Nieto.

“Mexico now presents itself to the world as a secure country, a country that is creating favourable conditions to attract productive investments,” the president adds, echoing a message that has been well understood at the highest levels of the UK government. “Mexico is the first major emerging economy to fully embrace the opportunities and rigours of free trade, and deservedly one of the first to reap its rewards” affirms Nick Clegg, British Deputy Prime Minister.