Article - September 17, 2014
The most relevant event in the energy industry, Mexico’s groundbreaking Energy Reform, will thrust the country into the investment limelight and change the North American energy landscape as we know it 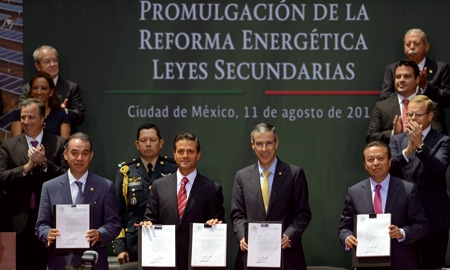 Mexican President Enrique Peña Nieto believes that solving the greatest challenges of our time requires big ideas. With this in mind, Mexico’s Head of State forged a broad consensus to carry out a package of urgently needed reforms.

“This is a symbolic and transcendental moment for the country,” the President said recently. “All Mexicans should feel a sense of pride, because our democracy has brought about real results. Thanks to this common purpose, in a few months we overcame decades of gridlock, destroying barriers that prevented Mexico from achieving strong and sustainable growth.”

The reform agenda came about through an unprecedented accord among the country’s major political factions, known as the Pact for Mexico. Together, they drafted a series of groundbreaking new laws and constitutional amendments that encompass 11 critical areas, including the energy sector, labor markets, education and social security, to name just a few.

“For the first time in history, we forged a broad agreement that did not originate from the need to address an emergency situation, but from an explicit determination to profoundly transform the country,” President Peña Nieto explained on his website.

The watershed deal prompted International Monetary Fund (IMF) Managing Director Christine Lagarde to declare Mexico “the only emerging market that has passed such number of sweeping reforms, in such a short time, and with such broad political support.” President Barack Obama also praised the Pact for Mexico, saying “as Mexico works to become more competitive, you’ve got a strong partner in the United States, because our success is shared. When one of us prospers, both of us prosper.”

On August 11, 2014, the Mexican Congress approved the secondary laws of Mexico’s ambitious Energy Reform, completing the historic legislation that will contribute to a North American energy boom, while improving the lives of Mexican citizens.

As President Peña Nieto has explained, over the last three decades, Mexico has successfully modernized its democracy and opened its economy to the world, resulting in the creation of competitive industries. Despite this progress, Mexico’s energy sector stagnated, largely due to a drop in production, even though its territory holds some of the world’s largest oil and gas reserves, estimated at 10 billion barrels of crude oil and close to 17 trillion cubic feet of natural gas, according to the Energy Information Administration (EIA).

The Energy Reform addresses these challenges with a number of decisive measures, all of which share the goal of attracting investment and modernizing the sector. The new laws maintain state ownership over hydrocarbon resources, while opening up the industry for the first time in 75 years, to private investment through service contracts, licenses, profit-sharing, and production-sharing contracts. President Peña Nieto has made it clear that transparency and accountability will be fundamental in the transformation of the energy sector. He has pointed out, for example, that in oil and natural gas exploration and extraction, any contract awarded by the government must be made public and can be audited.

The enabling laws also mandate that all the contributions, compensations, and payments related to the contracts must be publicly disclosed. Moreover, the secondary legislation governing the energy sector includes mechanisms for clear and mandatory checks and balances for the process of bidding, drawing up, and the management of contracts.

The Energy Reform also overhauls the sector’s regulatory framework, giving its governing institutions the necessary flexibility and autonomy to operate more efficiently. Once the new legislation is fully implemented, the state oil company Petróleos Mexicanos (Pemex) and the national electricity company, Comisión Federal de Electricidad (CFE), will be managed as Productive State Enterprises. This new legal status will allow them to become more market-oriented and to operate under an autonomous budget.
Among other responsibilities, they will be required to publish their financial results, even if they are not listed as publicly-traded companies. The goal is to make these companies comply with international best practices, while increasing their investment capital and technological capabilities. Moreover, the presence of new operators in the retail energy industry and the estimated increase of oil and natural gas production will reduce utility bills.

“This Reform will ensure the energy sector again becomes an engine for economic growth, by guaranteeing the supply of oil, gas and electricity at competitive prices,” President Peña Nieto wrote in the Financial Times. “It creates opportunities for private companies to invest and improve and expand the sector’s infrastructure.”

Echoing the Mexican government’s statements, private sector analysts forecast that the Energy Reform will help lift the Mexican economy in the coming months and years. Earlier this year, Moody’s upgraded Mexico’s government bond rating to A3, making it the second country in Latin America to receive an A rating, after Chile.

According to Nomura Securities economist Benito Berber the new framework will increase foreign direct investment by $10 billion annually, starting in 2016; while Gabriel Casillas, chief economist at Grupo Financiero Banorte SAB, estimates that annual private investment made possible under the Energy Reform will reach $50 billion by 2020.

Meanwhile, the Mexican government forecasts that accelerated activity in the energy sector will boost the country’s overall economic output by an additional 1% and create close to half-a-million jobs by 2018, on the way to generating 2.5 million jobs and adding an additional 2% to the country’s Gross Domestic Product (GDP) by 2025.

President Peña Nieto and his administration have not downplayed the challenges that this reform entails, stressing all along the important benefits that it will bring. “Our goal is to make Mexico more open, productive and competitive, with sound public finances and skilled human resources; so we can play a more active role in the global economy and provide our people with a better quality of life,” the President has said. “Together we are building a new Mexico.”