Having proposed a joint Middle Eastern anti-terror force to combat terrorist groups throughout the region, Egypt also looks to revitalize its military alliance with the United States as an ISIS backed insurgency takes hold in the country’s Sinai Peninsula 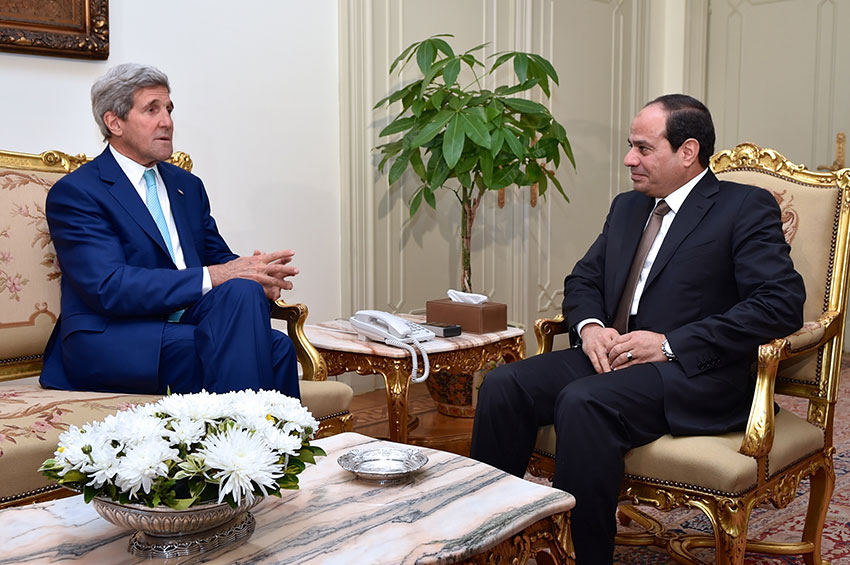 As the militant group known as the Islamic State of Iraq and Syria (ISIS) continues its brutal campaign in the Middle East, Egypt has stepped up its own war on terror in recent months, not only in dealing with an escalating jihadist insurgency in the Sinai Peninsula, but also calling for closer cooperation between allies to combat terrorism in the region as a whole.

Following a spate of deadly attacks in North Sinai that began in October, the government has issued a state of emergency in the area of Egypt bordering Gaza, and intensified its fight against Ansar Bayt al-Maqdis; the country’s most active militant group who claim responsibility for the violence.

Initially inspired by al-Qaeda, the Sinai group – which emerged after the 2011 Egyptian revolution – has now pledged allegiance to the so called Islamic State, not only sharing ideology, but also resources with which it is using to battle the Egyptian army. While Egypt –  and the Sinai Peninsula in particular –  is no stranger to terrorism, conditions in the area have become increasingly dangerous, with blasts and bombings occurring on a regular basis.

The army though has made a defiant response; bringing a high level of military presence to Sinai and deploying rapid intervention forces.  They have also created a ‘buffer zone’ along the border in an attempt to prevent the smuggling of arms and militants through tunnels from Gaza. While the fight to wipe out the insurgency is ongoing, there have been successes in destroying some 2000 contraband tunnels and the capture or killing of hundreds of terrorists. Egypt can likewise be encouraged by the fact that attacks are currently confined to Sinai (there have been a decrease in terrorist incidents in Egypt as a whole over the past year), and the extremists have been unable to declare an Islamic State in the country, unlike elsewhere in the region.

Fortunately Egypt also has one of the biggest military forces in the Middle East at its disposal, which isn’t just able to count on its wide experience in confronting militancy, but the wide backing of the Egyptian public too.  “I am an Egyptian soldier” recently trended on social networks in an outpouring of support for the army.

However, with the added danger of Jihadists crossing the Egyptian border from Libya to join the ISIS backed rebellion in Sinai, bringing with them weapons plundered from Muhammar Gadafi’s former arsenal, greater measures than those in reach of the Egyptian army alone will be needed to overcome the country’s terrorism threat completely.

To this effect, Egyptian President Abdel Fattah al-Sisi has recently proposed the formation of a joint Arab anti-terror force, with Egypt attempting to garner support from Saudi Arabia, the United Arab Emirates, Kuwait and Jordan towards an initiative that will combat all extremist groups throughout the Middle East.  The proposal has been welcomed by Arab League secretary-general Nabil al-Arabi, who said it may be a key issue on the agenda of an Arab summit in Cairo on March 28th.

Indeed with Egypt finding its feet again after three years of political turmoil, the army-led government of President Al-Sisi is now looking to regain its traditional stabilizing role in the Middle East as one of the region’s major economic and military powers. Egypt has a strong track record of tackling terrorism and has undoubtedly been a reliable ally in the global war on terror in terms of intelligence sharing, investigations and interrogations over the years.  “With cooperation from the global community, Egypt will continue to fight and defeat terrorism in the region,” Badr Abdelatty, Deputy Assistant Minister of Foreign Affairs recently affirmed.

Egypt’s cooperation with the “global community” largely centers on its relationship with the U.S.; an alliance that both sides hope to revitalize in the coming months as Egypt joins the U.S.-led coalition against ISIS. The U.S. has so far stalled in fully restoring its military cooperation with Egypt after it was put on hold following the ouster of the Muslim Brotherhood and its leader Mohamed Morsi in 2013.  The U.S. disagrees with the Al-Sisi government’s classification of the political party as a terrorist organization and the crackdown on its supporters, while Egypt believes the United States should do more to intervene in neighboring Libya.

Despite the differences, the countries’ partnership remains vital to the future stability of the region. Besides vital intelligence, Egypt will also likely offer logistical assistance and ideological support to the coalition against ISIS.  Indeed U.S. Secretary of State John Kerry recently emphasized Egypt’s role as an ideological opponent to ISIS by calling the country “an intellectual and cultural capital of the Muslim World.” President Al-Sisi himself has repeatedly highlighted the need to fight the extremist ideology behind ISIS and not simply the group itself.

Aside from enhanced cooperation with the U.S. and the leading role Egypt is taking in the fight against terrorism in the Middle East, the country hopes that its return to political and economic stability (realized in President Al-Sisi’s much needed reforms) can help calm the security situation in Sinai – an area where underdevelopment is said to have contributed to the rise of extremism.

As Egypt hosts its landmark Economic Development Conference in Sharm El Shiekh on March 13-15, offering up an exciting series of business opportunities that aim to consolidate the country’s recovery, the government will aim to harness international investments to create more employment - especially in areas where lack of opportunities has found radicalization taking root. While terrorism is a serious roadblock in Egypt’s future development, the country’s potential cannot be ignored. With the 2nd highest return on investment in the world after Brazil and GDP growth rates at 6.8% in the first quarter 2015, Egypt will continue to fight terrorism to see that its path towards greater prosperity is unobstructed.

By Aled Bryon, staff writer at The Worldfolio