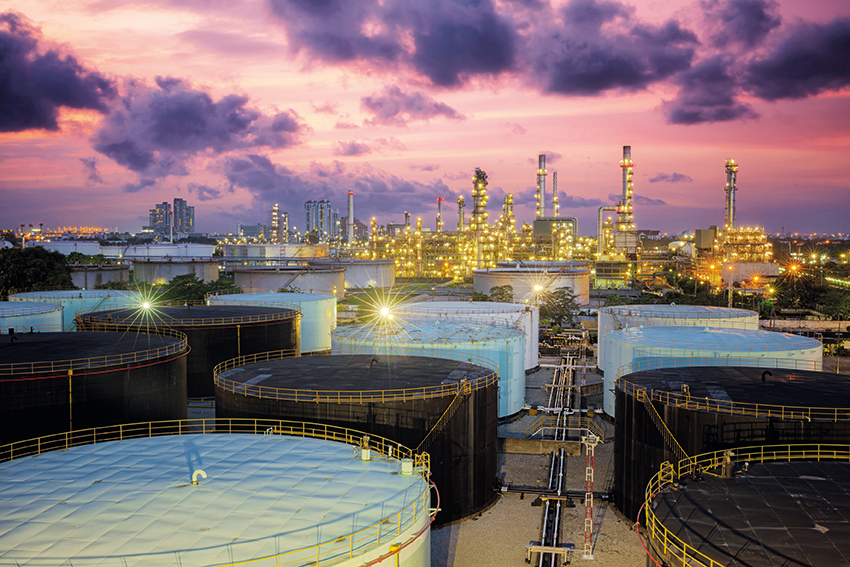 “With a wealth of experience and skills accumulated over the past 40 years in oil and petrochemicals and an abundance of resources, Saudi Arabia has an edge over its peers regarding product quality and production efficiency. It is very well positioned in the global petrochemicals market,” says Khalid Al Rabiah, CEO of one of the kingdom’s leading petrochemical companies, Chemanol.

“Both geographically and strategically, we have easy access to our largest markets – India and China – and are also centrally positioned with respect to Europe and the US. The industrial cities in Jubail and Yanbu, along with the expected railway network, have created an excellent hub for petrochemicals industries.”

This hub, Mr Al Rabiah adds, provides ample facilities to produce and transport products to markets in an efficient manner, giving the kingdom a tactical advantage compared to other regions.

His comments echo the position of Saudi authorities, which consider the petrochemical sector as key in their bid to diversify the economy. Although the country sits on huge reserves of crude, its dependency on oil is a cause for concern: it accounts for 45 per cent of the GDP and 80 per cent of government revenues.

The slump in oil prices since mid-2014 and its impact on the nation’s economy have spurred the acceleration of efforts to develop the industrial sector as a long-lasting solution against the volatility of the oil market and for providing much needed jobs for the growing, young population. And indeed the industry that attracts most interest and investment is petrochemicals, which along with the plastics sectors is already robust.

Saudi Arabia is one of the leading petrochemical producers in the world, accounting for around 8 per cent of total output, most notably through the public company Sabic (Saudi Arabian Basic Industries Corporation).

Now the kingdom is determined to maintain its leading position and has earmarked $91 billion to be spent over the next 10 years to build new plants, expand existing ones and integrate refineries with new or existing petrochemical units. For example one of the major projects under way is led by Saudi Aramco, the national oil company, which is building a $19.3 billion petrochemical plant in a joint venture with American specialty chemicals giant, Dow Chemical.

As for Chemanol, whose main manufacturing site is located in Jubail Industrial City, it announced two years ago a plan to build a new production plant for specialty chemicals in the Western Region, and a new 60,000 tonnes-per-year sulphonated naphtalene formaldehyde plant at Jubail, with a budget of SAR75 million (£13 million). However, given the recent evolution in the market and in oil prices, Chemanol announced in February that it would repeat a feasibility study on the planned Jubail facility.

Chemanol currently manufactures 13 premium grade methanol derivatives which have diverse applications including agricultural fertilisers, pharmaceuticals, solvents, intermediates, laminates, wood products, plastics, paper and the production of various types of concrete mixtures. The company is also exploring new investments in specialty chemicals and petrochemicals, including the acquisition of advanced technologies inside and outside

Saudi Arabia, according to documents filed in the stock exchange (Tadawul).
Tasnee (Saudi Arabia’s National Industrialisation Co) is a diversified industrial firm with interests in petrochemicals, metals and chemicals. It is one of the world’s largest producers of titanium dioxide through its Cristal subsidiary, in which it increased its stake at the end of last year.

Results of the petrochemical industry are indeed closely tied to oil prices and global economic growth because its products – plastics, fertilisers and metals – are used extensively in construction, agriculture, industry and in the manufacturing of consumer goods.

“The most important thing as you go down the chain is profitability, and sometimes it drops,” comments Mutlaq Al Morished, CEO of Tasnee, which was established in 1985 as the first joint-stock industrial company fully privately owned in the kingdom. “My priority is not only to diversify the economy, but also to generate dividends for shareholders. That is how the game is played.”

Like other petrochemical companies, Tasnee posted losses for the first quarter of 2015: net loss was SAR332.5 million compared with a profit of SAR320.8 million in the same period in 2014, according to documents filed at the stock exchange. In a separate statement, Tasnee commented that while sales volumes rose, the value of sales dropped 10.6 per cent year on year to SAR3.94 billion.

Petrochemical companies were hit by the sharp drop in oil prices, but they are confident this is only a temporary trend and indeed, prices have begun to rise again.
Structurally, Saudi’s efforts to develop the sector make sense. For one, the demand is there. According to an April 2014 report by the international consultancy firm McKinsey, total worldwide ethylene demand is projected to increase by more than 40 million tonnes per year to around 175 million tonnes by 2020, and to almost 210 million tonnes by 2025, with most of the end-user demand growth coming from China and other emerging economies.

New North American capacity and other advantaged feedstock-based producers will cover only around half of new demand, leaving extensive scope for companies in other regions.
Another important factor for Saudi Arabia is that it needs to provide jobs for its growing, young population, and the petrochemical sector is very labour intensive. Indeed, around half of the nation’s population of almost 29 million is under 25, and some 1.9 million Saudis will enter the workforce over the next decade.

This leads to another key challenge for Saudi authorities, which is to raise the level of education in order to match the skills required by employers. In this respect, Mr Al Morished says that, “Our advantages are first our attractive location and our oil and gas. But the other component is the workforce and it definitely is not as productive or efficient as in Europe or in China.

“Our challenge as a country is to change the education system so that it produces the engineers and technicians that the economy needs. This is why we in the private sector are investing heavily to train youngsters.”
Saudi authorities consider petrochemicals as a key industry that needs to be further developed through private capital. In fact, it is the only state in the Gulf Cooperation Council (GCC) to allow private investment in the petrochemical sector with several incentives such as affordable energy, low-cost raw materials, and advanced industrial infrastructure, especially in Yanbu.

This has led to the rapid expansion of Saudi’s plastics and petrochemicals sector, which has grown from less than $0.5 billion in 1985 to $22 billion in 2011. Furthermore, the sector’s net income increased at a compounded annual growth rate (CAGR) of about 35.2 per cent between 2001 and 2011, benefiting from capacity expansion and low production costs amid high petrochemical prices and demand, according to a 2012 report by Saudi Hollandi Capital.

The kingdom also made considerable investments over the past decade to build world-class petrochemical facilities. Capturing the gas flows associated with oil production that were previously flared and instead channelling those flows into very low-priced feedstock for chemical production has made it possible to build an immense and highly profitable industry.

With the execution of more than $28 billion worth of projects to manufacture more complex petrochemical products, Saudi Arabia has led the way in the Gulf region, which has contributed 11 per cent to global petrochemical-capacity growth and is now a leading global producer of ethylene, ethylene derivatives and methanol.

However, with the fluctuations in oil prices and the relatively slower growth of emerging economies, the kingdom, like other Gulf countries, is faced with a paradigm shift.

According to a report last year by McKinsey, the availability of low-price gas feedstocks has led to the spectacular growth of the Middle East’s petrochemical industry over the past 30 years. “But with advantaged new gas supply expected to end in most countries in the region over the next few years, petrochemical producers that want to expand domestically face major challenges.

“They can continue to build up their export industry using naphtha feedstock instead, but companies will have to find new ways to offset the handicap of their geographical location far from major growth markets. While obtaining naphtha at advantaged prices would help their position, the region’s petrochemical producers should become leaders in operating and functional efficiency. This will in turn require a broad mobilisation to build the managerial and technical capabilities needed to develop and further grow their businesses.”