A return to the Golden Age of Angolan coffee

Article - January 3, 2012
Angola used to be the world’s fourth-largest coffee exporter, and Grupo Cabuta is taking steps to return to those halcyon days 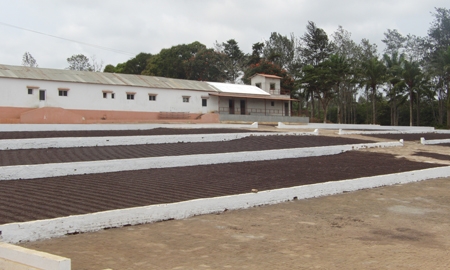 GRUPO CABUTA SPECIALISE IN THE PRODUCTION OF ROBUSTA, A COFFE BEAN WITH GREATER CAFFEINE CONTENT THAN ARABICA
SHARE

Once the world’s fourth-biggest coffee exporter, most of Angola’s colonial-era plantations were destroyed during the three decades of civil war which followed the country’s independence in 1975. Seven years into peace, the southern African country is now spending millions of dollars reinvigorating its coffee industry.

Knowing the massive potential a thriving coffee industry can have on the economy, Angolan authorities and private businesses alike have expressed great interest in regaining a piece of the international coffee market.

To this end the government is determined to create the best conditions for Angola’s coffee sector through a mix of public and private investments. Among the private investors are Bela Negra, which prides itself on its 100 per cent organic robusta beans. Grupo Cabuta, a fully Angolan-owned company whose businesses range from agriculture to construction and hospitality, produces Bela Negra, certified as a 100% organic brand by BCS Öko-Garantie GMBH.

The market potential for Angolan Robusta coffee, such as Cabuta’s Bela Negra brand, is huge; moreover, if production can be enhanced and yields increased, the country can count on a much greater quantity to be exported.

At its height in the 1970s, Angola was producing 228,000 tons of coffee from 2,500 large commercial farms. By 1985, just 34 state-owned companies produced less than 9,000 tons and by 2007 production was down to around 2,000 tons. While production fell year after year in Angola, global coffee prices were soaring – this fact eventually focused Angola’s attention back to coffee, now seen as a central plank of the plan to reinvigorate farming.

“Now that the war is over and we have a peaceful nation, I can see a very bright future for the coffee industry,” says Dott Vita, President of the Cabuta Group. “Back in 1963, Angola was the leading African producer of coffee and this is something we want to regain. That´s why we are concentrating all our efforts on the Cabuta Farm to return the vast coffee plantation to its former glory.  Political and social conditions in Angola are good right now, and we as a company are determined to stimulate the coffee industry and help diversify our economy like it was in the past, and perhaps have greater growth in the future.”

Bela Negra coffee is produced in Cabuta, an expansive plantation of over 10,000 hectares of green hills covered with coffee plantations and palm groves. The plantation employs around 1,000 workers, many of whom are cared for by the company through housing, educational and hospital facilities located on the property. The farm was recently converted to allow for agri-tourism, with 45 rooms distributed over five clusters, ranging from the large main house to individual bungalows, and a restaurant constructed on the grounds also for the hotel business. There are also other buildings on the premises that have been adapted from older houses that were in colonial times the homes of officials who administered the property.

The process of production for Bela Negra coffee is state of the art, efficiently utilizing latest generation equipment capable of increasing productivity. In addition, employees are entrusted with maintaining the capacity to control quality via their involvement with various complex procedures. Employees must be particularly attentive to the timing of collection, drying techniques, duration of the coffee beans exposure to the sun, and the final storage of the beans. Packaging is also key, safeguarding the organic process and quality of the final product.“In the case of Cabuta plantation, after years without appropriate treatment we had to pretty much strip the plantation back to bare bones,” says Mr Vita. “We pruned all the coffee plants, built new nurseries, used modern treatments to fight against plant disease, and we also rebuilt the public square where the fruits of the coffee plants are rolled and transformed into coffee ‘mabuba’. We have put a lot of love and dedication into the Cabuta Farm, and thankfully we are now reaping the benefits.”

Bela Negra coffee today is being exported to more and more countries around the globe. “We have negotiated with China and we are starting to work with Portugal – and hopefully from Portugal we can export to other countries within the European Union,” said Mr Vita.

Mr Vita is acutely aware of competition, and consequently is fanatical about the production of exceptional coffee beans. “It’s quality that allows us to compete with our competitors, such as Cafango and Angonabeiro, Delta and Ginga,” he said. “We produce absolute premium quality coffee, and that’s what sets us apart from our competitors.”

Looking to the future, Mr Vita believes there are also great investment opportunities in the coffee industry in Angola, and that they as a company are always open to the possibility of foreign partnership. “As we know, Angola was the fourth-largest producer of coffee in world, but the war stopped this achievement,” said Mr Vita. “Now that the war has come to an end, we want to reposition ourselves as a leading coffee producing nation once again, and to do this we must embrace new technologies a well as striking up partnership deals with other firms – whether they are national or international. That is something we as a company are very open to.”

Cabuta’s priority is to continue contributing to Angola’s coffee culture, re-establishing the country’s prominence in production and exportation, by producing an internationally recognised organic Robusta coffee brand such as Bela Negra.

These commercial aims are also inextricably linked to Grupo Cabuta’s social awareness, which ensures the wellbeing of employees and their families in order to create a reliable, healthy workforce loyal to the company. Bela Negra’s involvement in the rebirth of Angola’s coffee production helps stimulate the agricultural sector, and the country’s development as a whole.

“Coffee is very important for the future of Angola... coffee and all agro-industry is fundamental to the development of our society because it creates jobs – a lot more than the oil industry does,” added Mr Vita. “Coffee is for ever. It’s not going to run out like oil. I believe that our country can only gain from the coffee sector.”