Lombok, green and devout, is sometimes referred to as “The Unspoiled Bali” or “The Island of a Thousand Mosques”. It is directly to the west of Indonesia’s most famous tourism destination, Bali, and is the biggest island of West Nusa Tenggara province. 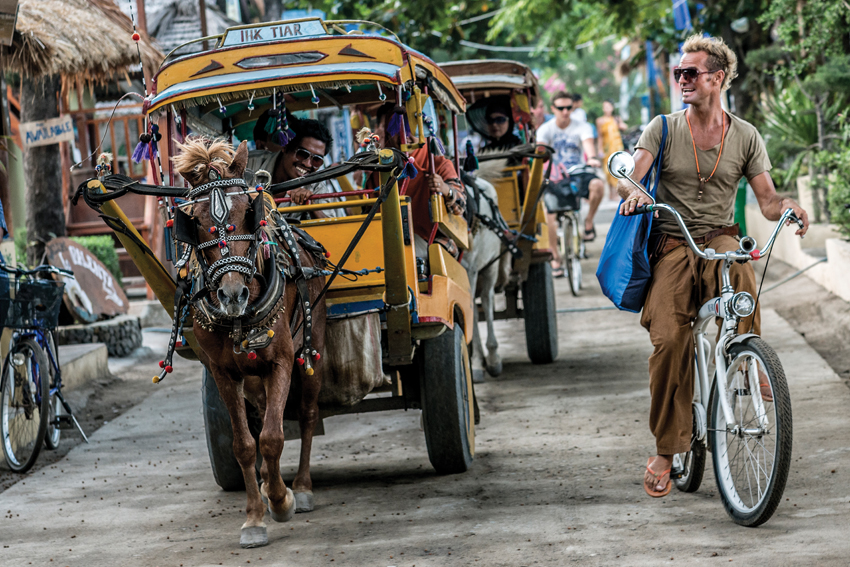 Unlike Bali, a predominantly Hindu area, the majority of locals (around 93%) on Lombok are Muslim. Despite the fact that approximately 65% of West Nusa Tenggara province’s population lives on Lombok, it is known for its green mountains, tranquil, untouched nature and pristine sea and beaches.

The highlands of Lombok are covered in verdant, lush forest. The Gunung Rinjani National Park offers vast tracks of hiking for tourists interested in fresh mountain air and mountain views. A vast crater lake, with a surface area of 11 square kilometres is one of the most popular sites for visitors. This lake, Segara Anak Toba, as it is known locally, offers breath-taking views and warm fresh water due to volcanic heating.

The Gili Islands are also becoming a more frequently visited tourist site. The three ‘Gilis’ (Gili Trawangan, Gili Meno and Gili Air) are small, tranquil destinations that offer nature-based, remote island travel experiences. Vehicles are not allowed on these islands, with bicycles and horses serving as the main forms of transport. The diving sites and beaches there are renowned throughout Indonesia and are becoming increasingly popular with foreign and domestic tourists.

Like many other parts of Indonesia, Lombok has an Islamic tradition linked to Arab seafarers. Centuries ago, Yemeni traders established a community in the port of Ampenan, a coastal district of Mataram (Lombok’s capital). This quaint district boasts still architecture as well as historical and cultural heritage from this Arabic period.

Given these conditions, it is hardly surprising that Lombok has emerged as Indonesia’s premier halal tourism destination. The local business community and provincial authorities have proactively sought to increase Lombok’s attractiveness to the Middle Eastern market. This includes halal certification by the Indonesia Ulema Council, increasing the availability of halal food, and training Arabic speaking guides.

Locations of cultural and religious interest, such as Ampenan Old Town and historic mosques have been included in specially tailored city tours. These are easily accessible from hotels such as the Oberoi, located in Medana Bay. This luxury residence offers 24 acres of manicured gardens and a sunset view of Mount Agung.

Indeed, infrastructure and logistics have increasingly made Lombok an easy to reach and well served travel destination. Lombok International Airport was opened in 2011. Its management is seeking to establish more international connections, but in the meantime, domestic flights are frequent. The majority connect Mataram to Jakarta and Denpasar, with flights times of two hours and 40 minutes respectively.

Ferries connect provide connections to the major neighboring island and fast boats connect the mainland to the small outlying Gilis.

All things considered, Lombok has succeeded as a pilot project for Indonesia’s Muslim-friendly provinces strategy. According to government officials, of the expected three million visitors to Lombok this year, as many as 30% are projected to be from the MENA region. If true this marks a turning point in Indonesian success in this lucrative tourism sub-sector.

The recognition received at last year’s World Halal Travel Summit have put Lombok on the map as a premier destination. As word spreads, and the market grows, experts believe that this is just the beginning of Lombok’s, and Indonesia’s, halal tourism boom.