Leading the miracle of the Caribbean

Article - March 12, 2013
President Danilo Medina and his administration continue to strive for economic growth and political stability, while keeping a firm eye on building infrastructure and developing the country 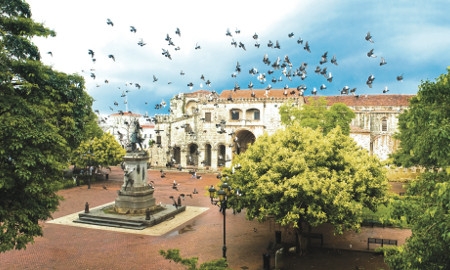 A visitor to the Dominican Republic today will find little in common with the island nation of 50 years ago. Once a Spanish colony and later turned dictatorship, today the D.R. is a bastion of democracy that has one of the largest economies in the region.
And while many heads of state around the world claim to be working towards social equality and sustainable growth, President Danilo Medina is putting his words into action.
Elected to the presidency in May last year, President Medina is following through with his predecessor Leonel Fernández’s plans, and a two-thirds majority in Congress is enabling him to push through his fiscal, social and educational reforms.
At his swearing-in ceremony, President Medina put forth his vision to continue along a path of socioeconomic development, based on the pillars of education, fiscal solvency, energy efficiency, and environmental preservation.
“I summon you to fight for very specific things: to irreversibly lower absolute poverty in our country; to eradicate illiteracy; to reduce inequality among people and regions; to introduce a new model of development based on more opportunities, more innovation, less bureaucracy and more environmental protection; to improve our education, our health and our public safety; to build a freer, fairer and more modern and independent country, with true democracy, strong institutions, human rights and absolute freedom of expression; and to build an ethical and transparent country, a meritocracy, and unrelentingly fight against all forms of impunity,” he said at the August event.
“Without education, there is no true freedom. Without a continuous, efficient and high quality electrical service, there is no productive competitiveness and our growth prospects are seriously compromised. And without a fair, transparent and sustainable tax system we cannot achieve our development plans and social justice,” he concluded.
The Medina administration’s methods for increasing investment in education to 4% of GDP in 2013 have not been met with across-the-board acceptance, largely because they involve higher taxes and less spending in other areas. Nevertheless, the President is looking at the long term, as a better educated population has higher prospects of helping to turn the D.R. from an upper-middle-income developing country into a developed country by the year 2030, as envisioned in the National Development Plan that was approved during the Fernández administration.
The country is well on its way, having already shifted from an agriculture-based economy to a service-based one. And it is precisely the services sector – specifically, tourism – that President Medina foresees as the greatest engine of growth. In the past several years, the sector’s share of GDP has hovered around 60%.
The presidential agenda includes the creation of policies to guarantee that within the next 10 years, 10 million tourists will visit the D.R., virtually doubling the number of arrivals today. Tourism, the government reasons, goes far beyond hotels and restaurants; it also benefits transportation, commerce and agriculture, and allows many small and medium-sized businesses to grow.
Despite its dip to third place behind services and industry in terms of GDP contribution, agriculture remains a key sector, employing approximately one-seventh of the population and ranking second – behind mining – in terms of export earnings.
In August, President Medina called upon the nation to enter into a social pact to fight poverty, create decent jobs and maintain average GDP growth at 4.5%. The will on his part is there; the next four years will determine whether he can keep his country on the path to full development.