Article - July 28, 2011
Six years ago the founders of Corbic seized the opportunity to advance innovation in cardioneurovascular healthcare 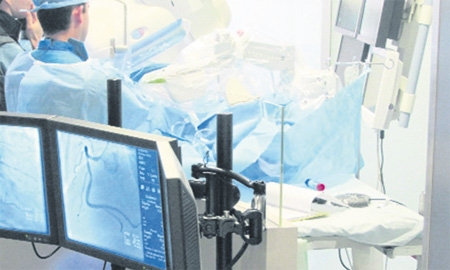 CORBIC WAS ESTABLISHED SIX YEARS AGO AS AN INNOVATIVE, STATE-OF-THE-ART MEDICAL CENTER
SHARE

One of the biggest hopes for Carlos Ignacio Granada is that his medical team’s business success story will be an example for further innovation not only in Colombia, but also throughout Latin America. The Colombian entrepreneur is the general manager and member of the founding team who established Corbic, a young company focused on the development of a unique technology development platform in cardioneurovascular healthcare.

Corbic is the quintessential example of detecting a need for innovation in the market and seizing the opportunity through good ideas and persistence. It was founded in 2005 by the group of five cardiologists and a business manager who realized that patients were sometimes unable to obtain access to innovative life-saving technologies to treat their respective heart conditions. By creating a state-of-the-art medical center and aligning inventors, medical device developers and scientists, Corbic has created a unique platform to foster innovation.

“Corbic’s creation was based on two essential reasons. The first one was born from the needs of the Colombian population,” says Mr. Granada, who explains that this prompted the group to find alternatives to facilitate access to technology. “The second reason had to do with the interest to develop a clear innovation culture in a country where the number of patents registered by year is unsatisfactory.”

Corbic has used the strategy of goodwill and results to achieve credibility and acceptance in the international business world at a time when Colombia may not be instinctively thought of as a place for the commerce of knowledge.“We hope that this strategy will help local innovators in the future to take advantage of its benefits, and to be able to develop their own ideas,” says Mr. Granada. “We believe the deficit in the region is not caused by lack of ideas, but rather by a lack of mechanisms to facilitate the successful execution of such ideas.”

Patients, however, are only one aspect of Corbic’s success: “From the moment the medical center opened its doors, we have focused on research by taking advantage of the connections established with academic centers in the U.S.,” affirms Mr. Granada, adding with pride that his company’s findings have been published in prominent publications such as the Wall Street Journal and the Journal of the American College of Cardiology.

Corbic has an enduring partnership with General Electric Healthcare, who supplies their technology, including imaging, monitoring systems and anesthesia-related devices. In terms of research and education, the pioneering company has already forged a strong relationship with various American research centers, including the Jack H. Skirball Center for Cardiovascular Research (SCCR) which forms part of the Cardiovascular Research Foundation in New York.

In just six years, Corbic has not wavered from its principles and has stuck to its goals, being rewarded with business success and satisfied patients all over the world.