The talks began in October 2012  in Norway, and then moved to Cuba the following month. 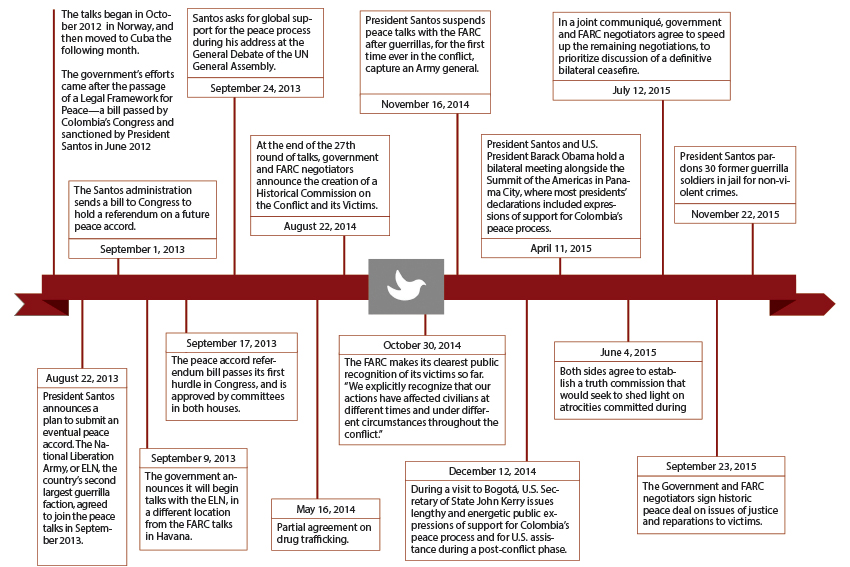 August 22, 2013:
President Santos announces a plan to submit an eventual peace accord. The National Liberation Army, or ELN, the country’s second largest guerrilla faction, agreed to join the peace talks in September 2013.

September 1, 2013
The Santos administration sends a bill to Congress to hold a referendum on a future peace accord.

September 9, 2013
The government announces it will begin talks with the ELN, in a different location from the FARC talks in Havana.

September 17, 2013
The peace accord referendum bill passes its first hurdle in Congress, and is approved by committees in both houses.

September 24, 2013
Santos asks for global support for the peace process during his address at the General Debate of the UN General Assembly.

May 16, 2014
Partial agreement on drug trafficking.

August 22, 2014
At the end of the 27th round of talks, government and FARC negotiators announce the creation of a Historical Commission on the Conflict and its Victims.

October 30, 2014
The FARC makes its clearest public recognition of its victims so far. “We explicitly recognize that our actions have affected civilians at different times and under different circumstances throughout the conflict.”

November 16, 2014
President Santos suspends peace talks with the FARC after guerrillas, for the first time ever in the conflict, capture an Army general.

December 12, 2014
During a visit to Bogotá, U.S. Secretary of State John Kerry issues lengthy and energetic public expressions of support for Colombia’s peace process and for U.S. assistance during a post-conflict phase.

April 11, 2015
President Santos and U.S. President Barack Obama hold a bilateral meeting alongside the Summit of the Americas in Panama City, where most presidents’ declarations included expressions of support for Colombia’s peace process.

June 4, 2015
Both sides agree to establish a truth commission that would seek to shed light on atrocities committed during their war.

July 12, 2015
In a joint communiqué, government and FARC negotiators agree to speed up the remaining negotiations, to prioritize discussion of a definitive bilateral ceasefire.

September 23, 2015
The Government and FARC negotiators sign historic peace deal on issues of justice and reparations to victims.