Article - December 2, 2013
A historic city of world heritage and a charming urban oasis 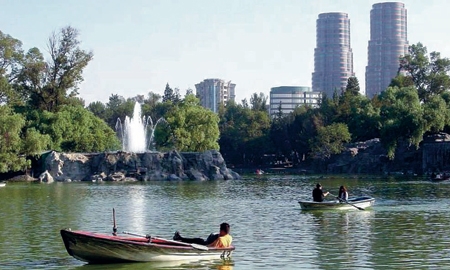 What better way to start your Mexican experience than with a trip to the capital? Mexico City is the country’s true bubbling pot of culture with no end of fascinating things to feast your eyes (and mouths) upon. As one of the largest metropolitan areas in the world, it is also one of the oldest – highlighted by its status as a UNESCO World Heritage Site (just one of the country’s astounding 27 listed UNESCO awarded spots).
The city is a real kaleidoscope into history, allowing you to jump through time as you turn from street to street – from the mysterious remains of pre-Hispanic towns to beautiful colonial temples. What’s more, thanks to the great number of monuments, traditional neighborhoods, historical buildings and cultural centers, the Mexican capital has no place for boredom.
While the sprawling metropolis can sometimes be overwhelming for a first-time visitor, it means a visit to the urban oasis of Bosque de Chapultepec is absolutely unmissable.
The 1,600-acre green expanse at the heart of the city claims to be the largest municipal park in the Western Hemisphere, rivaling that of Central Park in New York. Built by the Aztecs, it is also a symbol of national history and identity, containing the current presidential residence (Los Pinos), many large lakes, several museums, a botanical garden and a zoo.
Meanwhile, a visit to one of Bosque de Chapultepec’s closest neighborhoods is likewise indispensible. In the upscale district of charm-filled Polanco, you can see antique shops, sidewalk cafes and sophisticated restaurants, world-class hotels, and nightlife attractions – plus some of the best shopping in the city. Not only does this area’s dining landscape cover all the classic Mexican flavors, but you’ll also find international cuisine at its finest.