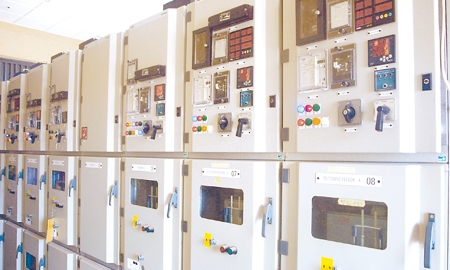 For years, the emerging Nigeria has been undergoing a series of reforms, according to the OECD. The growth rate is at a robust 7 per cent, impelled by non-oil-based sectors such as telecommunications, construction industry, wholesale and retail, hospitality, industry and agriculture.

Since oil was discovered in Nigeria in 1958, it has made up 90 per cent of the country’s income from exports, resulting in immense environmental damage in the Niger Delta region. The World Bank pointed out that one of the main hindrances to sustainable development in the country was the lack of energy infrastructure. Therefore the sixth most important oil exporter in the world lagged behind its African neighbours in terms of energy supply. Put into figures, it takes an average of 260 days for a power connector to be installed, as stated in the Doing Business Report for 2013. That is twice as long as the average in South Africa and 2.6 times the average of the OECD.

The country intends to achieve an average growth rate of at least 6.5 per cent for the coming years. Energy production is supposed to grow 10 times in the next five years to 40,000MW. Bolaji Oyesiku, General Manager of Ibadan Electricity Distribution Company is one of those committed to achieve this ambitious goal.

“It means taking a huge step forward,” he says. But it will only be possible with the right infrastructure. “The amount of energy that we are talking about could be produced just in Lagos.” His advice is to build up a liberalised energy sector and seek help from abroad, through partnerships with energy suppliers like Ibadan, which took its name from the city of 5 million inhabitants in the southwest of the country. In the city of Ibadan there are food, cigarette and printing companies. At the moment the main energy suppliers are not able to produce electricity at full capacity due to technical reasons.

That leads to power cuts that drive up prices and create shortages. Ibadan, for example, is one of the biggest energy suppliers in the country. At present it produces an average of 250MW, though its technology enables the company to produce three times as much.

If it is reequipped, it can produce four times as much or even more. But how is that achievable? One thing is clear: alternative energies would not be able to provide, at this stage, the necessary amount. At the moment the main bottleneck factor is the lack of employees with specialised skills. Furthermore the technological impulse has to come from abroad. Mr Oyesiku explains that international partners that enter a privatised energy sector are welcome, should they contribute with ideas and technology and are therefore able to drive the whole country forward.

In search of a simplified answer to the problem, it is important to look at unconventional solutions as well. For example, as the banking system of Nigeria weakens, some Ibadan customers have recently been able to pay by using a scratch card system. The cards work in a similar way to mobile phone cards, where customers can pay as they go. Those who have problems paying the monthly electricity bill can divide the amount. As a result the customer gets less stressed and paying the bills becomes more affordable. The company, on the other hand, increases its profits.

The pilot phase has already been a success and the export of the idea into other regions of the country is likely. The Point of Sale (POS) system, the energy card and payment through the internet have become within reach of the population.
“We are very surprised at the good results,” Mr Oyesiku says. Having an open mind to new ideas is what makes a good manager. “Then it is only about bringing them to the point. Investors are invited to try that too.”