Back in the driving seat

With renewed confidence, Italy is seeing the knock-on effect of an ambitious reform agenda. The country is taking the lead to shape a new European vision and has emerged as a crucial diplomatic and geostrategic player in the Mediterranean region 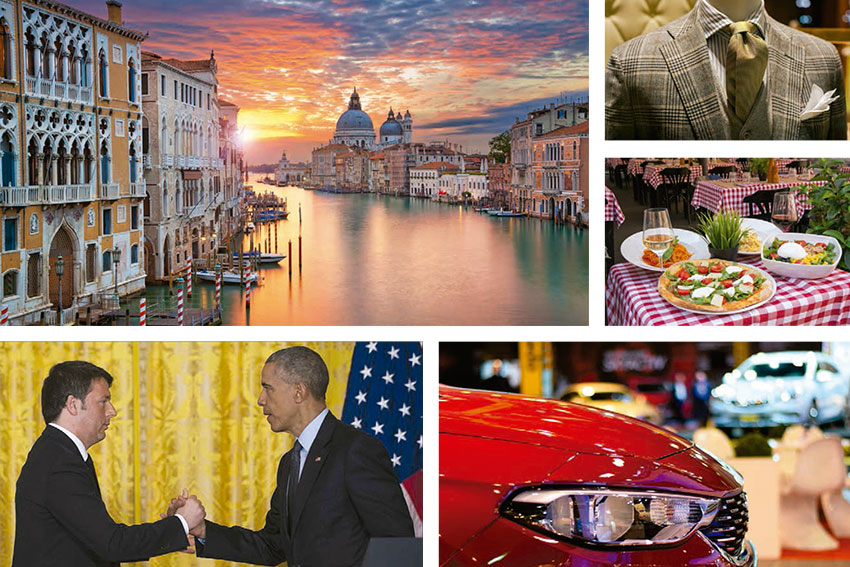 The eighth biggest economy, the fifth most popular tourism destination, and the undisputed global capital of the three F’s (fashion, furniture and food),  the Italian treasury is buoyed by an exceptional luxury manufacturing sector, and the largest number of UNESCO heritage sites on the planet.

Hit hard by the Great Recession of 2008 which obliterated 6% of the country’s GDP, Italy is at last emerging from its longest economic crisis.

“Italy, a country enriched by an extraordinary history, has always been at the forefront of innovation and is today engaged in seizing the opportunities of new endeavors. The Italian economy, traditionally strong and competitive in many industrial sectors, will benefit from reforms and new investments,” says Italy’s Ambassador to the U.S., Armando Varricchio.

With unquestionable energy and determination Prime Minister Matteo Renzi (pictured to the right with President Obama) is working to avoid another period of economic stalemate such as that  which the country struggled through between 2000 and 2008, and is helping Italy rediscover its confidence in the international arena using a steady stream of economic and bureaucratic reforms.

Addressing these bottlenecking state structures which have in the past slowed the economy down, whilst emphasizing exports backed by the ‘Made in Italy’ seal has led to a healthy positive trade balance of almost €45.2 billion ($50.7 billion).

The first issue to be taken on was the rigidity of the labor market. Through the administration’s introduction of the Jobs Act, the government has effectively streamlined the process of hiring workers.  Giuliano Poletti, Minister of Labor and Social Policy, says that the law created 750,000 permanent contracts of employment last year and infused Italy’s labor market with some much-needed flexibility.

“The law represented a cultural change.  We shifted from a system that exclusively protected employees within their work place to a more flexible system which responds to the dynamic marketplace,” Mr. Poletti says.

The young, who have traditionally seen their careers hindered by the overprotection of senior professionals, stand a lot to gain from this change in legislation.

Next to be tackled was Italy’s congested justice system, which has been chronically plagued by inefficiency and red tape.  Under the changes introduced by Minister of Justice Andrea Orlando, the number of trials in the country has been reduced from 6 million to 4.2 million.

In addition, the civil justice reform has sped up legal proceedings and Italy has leapt 13 places in the World Bank’s Ease of Doing Business rankings for settlements of commercial disputes. This offers reassurance to U.S. investors, who see “the slow pace of Italy’s civil justice system as the number one issue”, according to U.S. Ambassador to Italy, John Phillips.

Mr. Renzi’s vision also translated into the Unlock Italy Decree, another piece of legislation that seeks to soften fiscal stringency in order to promote investment in public infrastructure, transport and real estate.  This looks set to bridge the gap between Italy’s powerful northern economy and under-developed south, which will unite and drive economic growth.

Rejuvenated Italian assertiveness is especially visible in their dealings with the EU, where Mr. Renzi has defied the doctrine of austerity heralded by Germany and other northern European countries.  He frequently cites the U.S. as an example of how to overcome an economic crisis.  In an open letter to Italian newspaper La Repubblica, Mr. Renzi said, “During the past eight years of democratic presidency, the United States has bet on growth, investment and innovation, while Europe was betting on austerity and strictness. From an economic standpoint the United States is faring better than they were eight years ago. Europe is faring worse.”

The Italian Prime Minister also wants to see change in how migratory flows towards Europe are dealt with. His country is the main entry point for both economic migrants and refugees, critically testing its ability to cope, and yet propelling the country’s international standing as a pivotal diplomatic and geostrategic ally of the United States in the Mediterranean region.  EU solidarity with Italy and other Mediterranean members seems to be in short supply however.

The Migration Compact proposed by Italy to its EU partners is a holistic Europe-Africa approach to fund projects in Africa, as a means of boosting the continent’s economic development and mitigating economic reasons for making the trip to Europe. Other mechanisms would serve to finance security and African partners’ internal migration management.

While focusing on its non-military role, the government does not want to shy away from hard power. Nearby destabilizing threats such as the situation in Syria or Libya – the latter a formerly close Italian ally – have led Italy to start readying and modernizing its armed forces.

Roberta Pinotti, Italian Minister of Defense, says that her country’s national contingent is the first in Europe in terms of contribution to EU military operations as well as to UN missions. Its armed forces are also engaged in the international coalition against ISIS.

The security priority is, however, Italy’s own neighborhood: “We will not decline our participation and commitment to missions in more distant areas, but since the Mediterranean is where the harshest conflicts are happening today, we are convinced Italy must become a reference actor for the security missions carried out in the whole area”, Ms. Pinotti says.

“Italy has always been at the forefront of innovation and is today engaged in seizing the opportunities of new endeavors. The Italian economy, traditionally strong and competitive in many industrial sectors, will benefit from reforms and new investments”

It seems clear that this resurging Italy is securing a bigger say in global affairs. Its election, along with The Netherlands, as a non-permanent member of the UN Security Council for 2017-2018 is proof of the country’s growing international acceptance as a key interlocutor in the security issues that matter most to the world.

Mario Giro, Deputy Minister of Foreign Affairs and International Cooperation, says Italy’s election to the UNSC role proves that the Italian foreign policy “has changed dramatically in the last few years”. What the world can expect from Italy is, in his view, “a crucial role in facilitating dialogue in areas characterized by high political instability”.

As Italy makes its voice heard internationally, its bilateral relationship with the U.S. is expected to remain central, as it has been since the end of World War II.

“We work closely on matters of international security, protecting human rights, promoting economic growth, safeguarding the environment and supporting the work of the United Nations,” says Ambassador Varricchio. “This enduring alliance is enriched daily with culture, innovation, and high-tech.”

Last year Italy was the U.S.’ 10th largest trading partner.  Fortunately, reforms are already ushering in palpable changes. U.S. Ambassador Phillips has noticed them, and thinks they are bearing fruit: “Sustained progress will turn into more interest from U.S. investors. Already in 2016, Apple, Cisco, GE, and IBM have announced major projects in Italy.”