The true experience of diversity and discovery 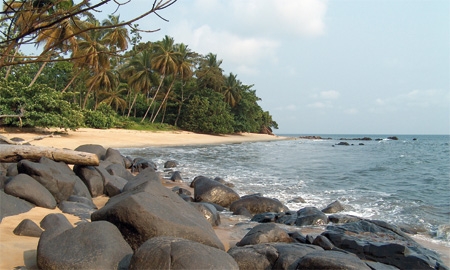 FROM VIRGIN BEACHES TO WILDLIFE SAFARIS AND CULTURAL EXPERIENCES, CAMEROON IS OPEN TO TRAVELLERS WHO SEEK UNIQUE EXPERIENCES
SHARE

Last year was an excellent year for tourism in Cameroon, with more than 500,000 visitors to the central African country. Numbers were undoubtedly boosted by the 2010 FIFA World Cup in South Africa putting the whole continent on the radars of holidaymakers worldwide.

Cameroon has much to offer travellers, with the natural beauty found in its stretches of beach-lined coast matched by magnificent wildlife reservations that teem with cheetahs, giraffes, elephants and many other animals. Its cities feature fascinating museums and pulse with thriving nightlife, while beyond city limits scenic landscapes lie for tourists to discover.

The Government is determined to attract many more tourists in the future and has taken several important steps to help promote the country as a place to come visit. The Minister of Tourism, Baba Hamadou, understands the country’s potential and wants to use it to spur job creation and economic growth.

“Thanks to tourism we can create jobs and increase revenue that will reach the workers,” he says. “Cameroon is once again starting to promote tourism with new policies and by working hard to make our country a true tourism destination.”

Mr Hamadou and the Ministry are working in several directions to promote the country. This year the Ministry is sending representatives to European capitals such as Madrid, Berlin and London to tell tourists and tour operators about all the delightful things the country has to offer those who choose to come visit.

For those who want to relax at the seaside, the country has two resort towns with beautiful beaches. Limbe, located in an English-speaking region, has black volcanic sand, nearby wildlife parks and a lush mountain range in the background.
Kribi is farther south along the coast, in a French-speaking region. Its white-sand beaches attract thousands of visitors every year and are close enough to the Lobe waterfalls for a day trip. Both cities offer many tourist amenities such as top-notch hotels, restaurants and nightlife.

Also on the coast, not far from Limbe, is Mount Cameroon. The active volcano is a popular destination for activity-oriented travellers, who can enjoy climbing the highest mountain in the region. Hikers can set out from the city of Buea, where guides can also be hired and equipment rented.

For travellers more interested in experiencing Cameroon’s varied wildlife reserves, the most common destination is the north. There, the Waza National Park is home to hippopotamuses, rhinoceroses and other large animals. The 656-square-mile park offers developed tourist infrastructure and is also a UNESCO biosphere reserve.

Other regions, in the east and south, have great potential for tourism, with their rainforests and abundant wildlife including chimpanzees, elephants and gorillas. The regions, and indeed the whole country, are ripe for investment to promote eco-tourism.

“Cameroon has ten regions and studies have shown that every region has eco-tourism potential,” says Mr Hamadou. “Now we have a big project to implement eco-tourism in every region. We have chosen the west and northwest to focus on. The regions are close to one another so we can organise trips for tourists to both of these.”

Cameroon’s cities are also interesting destinations. Douala, located on the Wouri River near the coast, is the country’s biggest city and boasts a hopping nightlife neighbourhood called Akwa. Tourists can also visit the city’s many wonderful patisseries and restaurants, some with views of the Gulf of Guinea and nearby mangrove swamps.

Cameroon is sometimes called “Africa in miniature” and for a good reason. For travellers who are not content with just one type of vacation activity, Cameroon is a perfect destination as they can spend a few days at the beach, climb mountains, visit wildlife parks and see wild animals, all while enjoying the country’s excellent food and music.