With a brand-new international ariport to be unveiled in 2017, and the overhaul of national carrier TAAG, Angola is on course to become a regional, if not international, centre for aviation 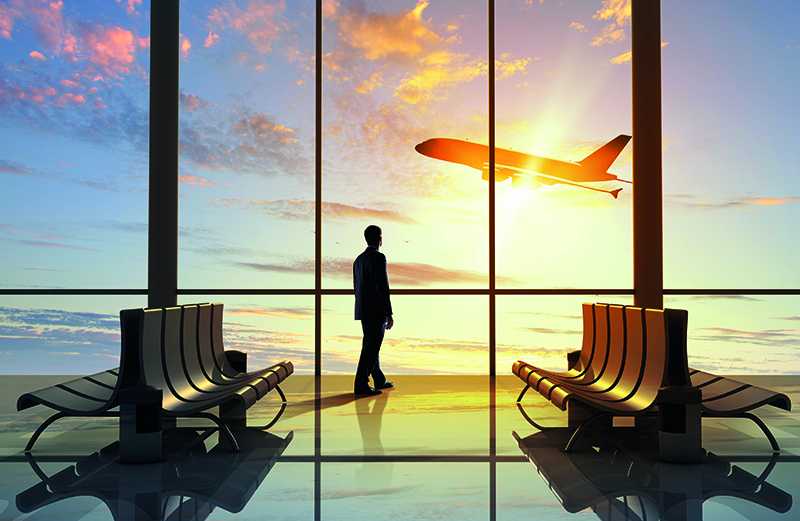 Angola is in a hurry and in almost no other place in the country is this quite as evident as at the vast construction site some 25 miles southeast of Luanda, where thousands of workers are busily putting the finishing touches to the brand-new Angola International Airport, scheduled to open in 2017.

Designed to handle 15 million passengers and 35,000 metric tons of cargo a year, the facility will channel flights to and from such far-flung destinations as Houston and Beijing, reflecting Angola’s bid to become a major regional and even international aviation transport center.

In its efforts to ensure that dream takes off, the government of President José Eduardo Dos Santos has carried out a series of measures such as reaching the necessary agreements with international aviation agencies to guarantee air safety and other concerns, launching a multi-billion-dollar campaign to upgrade airports around the country and overhauling Angola’s once poorly-run flag carrier, TAAG.

“Our national aviation sector needed to be completely restructured and after careful study the first thing we did was to reformulate its whole legislative and regulatory framework,” explains Transport Minister Augusto Da Silva Tomás.

This involved hammering out more than 3,500 pages of comprehensive agreements and accords with such bodies as the European Union, the International Civil Aviation Organization and the International Air Transport Association.

“Our entity for regulating and supervising the sector, the Instituto Nacional de Aviação (or National Aviation Institute) has also been restructured,” the minister says.

In another move, airport infrastructure, equipment and staff training were modernized at well over a dozen airports from major cities such as Luanda, Cabina and Soyo, to provincial capitals. “And then there is the new Angola International Airport which will be among the largest ones in Africa and the largest in Central Africa,” explains Mr. Da Silva.

“As is known in the aviation sector, TAAG was blacklisted and forbidden to fly to Europe,” he continues. “So we started with what we called the ‘Turnaround’, the program to rebuild TAAG, aimed at thoroughly reorganizing the company at the technical, organizational, financial, economic and social levels with the ultimate aim that the airline could be taken off the European Union blacklist.”

Instrumental in putting TAAG right is the agreement the flag carrier signed with highly-successful Emirates Airline of Dubai under which the Middle Eastern company is to manage the Angolan partner for a period of 10 years.

Under the terms of the accord, Emirates is to name a new CEO, appoint four  senior staff members to work for TAAG, review operations, design a business plan, seek synergies between the two airlines, train TAAG staff and carry out other tasks, but without taking an equity stake.

According to analysts, these measures would help the Angolan carrier eventually compete on routes with foreign airlines currently serving Luanda such as British Airways, Lufthansa, KLM, Air France, Iberia and others.

Airline industry analysts said that while TAAG certainly benefits from the arrangement, it can also be good for Emirates as Angola is a restricted, but high-yielding market and will strengthen the United Arab Emirates’ trade ties to Africa and especially, of course, Angola with which it shares an oil-based economy.

The Arab carrier began flights to Angola in 2009 and last year increased its flights from three times a week to daily, while most intercontinental airlines are restricted to two or three flights a week.

“Emirates is a worldwide reference company that can bring us huge benefits,” argues TAAG Chairman, Dr. Joaquim Teixeira da Cunha. “With this agreement, we expect our airline to become more capable and, at the same time, it will support our government’s intention to transform the new Angola International Airport into a regional aviation hub.”

“Over the next several years,” he adds, “we expect TAAG to grow 14%, but from 2017, when the new airport begins operations, we predict larger growth due to the increase in traffic from regional flights to Luanda connecting with international flights to Latin America, Europe and probably Asia and the Middle East.”

One of the key steps in transforming the Angolan airline was the purchase of new, more fuel-efficient passenger jets from Boeing, the giant U.S. aircraft manufacturing company with which Dr. Teixeira says the country has been working since it bought its first new, one-source aircraft fleet following independence.

“For so many years, TAAG operated with very old airplanes and all kinds of aircraft from different sources,” recalls João Miguel Santos, Boeing International’s Vice President for Africa.

“Finally, the president made a decision that TAAG needed to grow and after an intense competition, we were fortunately selected as the preferred airplane supplier and it was an honor.”

Just over 10 years ago, Boeing delivered the first two 777s and three 737s and about five months later, another 737.

“The airline continued flying a couple of small airplanes because there were some little airports that couldn’t cope with larger airplanes like the 737,” says Mr. Santos. “But under the leadership of the transport minister, they have improved the majority of Angolan airports and the 737s can now land there.”

Since then, the U.S. manufacturer has delivered more 777s, which the executive maintains are just right for TAAG’s non-stop routes with full passenger and cargo loads.

And it is air cargo capacity which will go towards helping the Angolan government in its ambitious drive to diversify the economy away from the heavy dependence on hydrocarbons and other extractive resources, according to the executive.

Says Mr. Santos: “Agricultural products are best shipped to long-distance foreign markets by cargo jet and you just have to look at the example of another African country, Kenya. You go to a supermarket in London and all the green beans are from Kenya which need to be air freighted from source to market in two or three days.

“Angola could export cut flowers from the province of Huambo to Europe but you need an airport that can handle such products. Right now, airports there can’t do that but the minister has a plan to develop Huambo into an international airport.”

Mr. Santos boasts that he is proud of his company’s long-term relationship with Angola. “Angola is my home country and I think we at Boeing have established ourselves very well as a partner to both TAAG and the country. We don’t just sell airplanes; we work with the ENANA airport authority and with the civil aviation authority, or National Aviation Institute (INAVIC),” he says.

This latter agency has undergone what Secretary of Civil Aviation Mário Miguel Domingues describes as an “enhancement process” since 2008 to improve its functions as a regulatory body that provides airports and airlines with the required certifications.

“This means,” explains Mr. Domingues, “that it controls all activities in the aviation sector, guarantees operational safety and strictly applies all the rules and practices of the International Civil Aviation Organization (ICAO).”

“And even though the modernization program and technical empowerment that the INAVIC has gone through is constantly maintained, it remains permanently audited by the ICAO to correct occasional problems and to improve its international credibility,” he adds.

Among INAVIC’s other important tasks are overseeing air traffic control, carrying out medical checks of aviation personnel, ensuring the rights of passengers traveling to and from Angola and licensing flight instructors.

Angola’s second big step to ensure its international “air worthiness” was the overhaul of TAAG to get it off the European blacklist.

“We made all the efforts to bridge the gaps detected during the audit by the ICAO and the International Air Transport Association and we worked intensely to bring TAAG back to sufficient civil aviation safety levels,” boasts Mr. Domingues.

“It now has all the qualifications required to fly anywhere, including to the United States,” says the secretary of civil aviation. “Service quality has been raised across the board and we’ve ordered new aircraft and other equipment which will make TAAG even better.”

Mr. Domingues maintains that with Angola’s economy booming thanks to oil and gas revenue, the country sorely needed to radically upgrade its air links, infrastructure and state-run carrier. And the country is not only attracting the international business community but foreign tourists as well, drawn by Angola’s stunning natural beauty, wildlife, rich culture and adventure destinations.

Angola’s Kissama National Park, just 43 miles from the capital, covers 3 million acres of jungle, savanna and grasslands and counts among its denizens zebra, antelope, buffalo, elephants, and the many exotically colored birds native to Africa.

In the southwest of the country, the province of Huila offers visitors stunning mountain views, thundering waterfalls, volcanic landscapes and fascinating tribal cultures, while those seeking adventure can travel to the southern coastline for deep-sea shark fishing, diving, hiking, parasailing, and whale-watching cruises.

And for surfers, Cabo Ledo, one of the longest point breaks in the world, is just an hour south of Luanda and perfect not only for veteran wave riders but beginners as well. Beachfront cafes serve up ice-cold beer and giant lobsters.

“Given this country’s amazing potential, we couldn’t just sit on our hands so we did all this, plus we began building the new Angola International Airport, which will be a reference in Africa,” says Mr. Domingues. “In fact, we are in a more central location than South Africa for becoming a regional hub, for example.”

According to the secretary, all the African countries are working hard to develop and better integrate their transportation infrastructure through increased cooperation. In recent years, African air transport has grown strongly and it is not true anymore that the quickest and most convenient way to get from the east to the west of the continent, or vice versa, was to fly via Europe.

New passenger services are satisfying the demand by the increasing number of tourists heading to Africa, while more freight services are helping boost those exports vital for earning badly needed foreign exchange.

However, analysts say challenges for African aviation remain, such as the expense due to the until-recently high fuel prices, a lack of convenient connections and safety issues. And for the airlines themselves, landing fees are higher than most of the rest of the world and there needs to be more regulatory oversight as well as more “open skies” policies which would reduce airfares.

Mr. Domingues says he hopes these obstacles can be reduced as African nations up their aviation game for the benefit of all and that was the reason that Angola has put such resources into getting its own house in order.

“Our intention has been to create a civil aviation sector in line with the economic development taking place in everything else in the country by making tremendous investments in human capital, technology and the environment,” he remarks.

While many foreign governments and companies are helping Angola in this endeavor, the secretary notes that the United States is “without a doubt, the best strategic partner for us”, highlighting the country’s long reliance on the Boeing corporation to supply the state airline’s passenger jets.

“All in all,” he concludes, “I would say that for Angola our aviation sector is going to be one of the best, if not the best, in all of Africa. We have the resources, will and determination to see this through. As they say: ‘The sky’s the limit!’”