Article - March 11, 2013
What better to accompany a decanter of cask-mellowed añejo rum than a fine hand-rolled cigar? 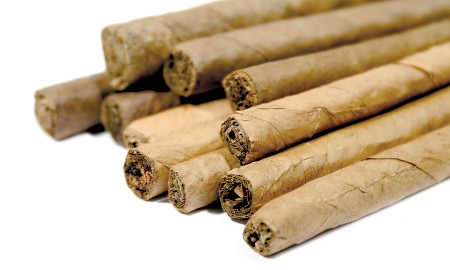 THERE ARE 27 TOBACCO COMPANIES IN THE D.R., WHICH IN TOTAL EMPLOY MORE THAN 12,000 PEOPLE
SHARE

Odd that two of life’s little luxuries should be coming from the same place. At one time, that was Cuba, but much of the generationally honed expertise that worked its wonders on select tobacco leaf and sugarcane by-products has since departed in the political exodus from that country.
Of course, it is not totally a matter of know-how. You also need the precise climatological conditions to grow your time-tested ingredients, as well as skilled professionals to oversee their transformation into sybaritic delights. When you have both, then you’re in the Dominican Republic.
Known everywhere for its smoothness, Dominican light rum is a big seller in nearly 50 countries, bringing in some $120 million annual export earnings.
Authorities strictly enforce legislation requiring that the product be aged between 12 and 18 months in oak barrels that have previously been used for bourbon. The essence of the Dominican spirit is molasses, but you’ll find a few upmarket blends in which the spirit is distilled from raw sugar cane juice.
The roots of rum
It was Columbus who first brought sugar cane to Hispaniola on the second of his voyages to the New World.
Over the next few centuries, the spirit distilled from it could charitably be described as “pirate plonk” – good for a quick hangover, a drink fit for slaves and sailors.
Not until the 19th century did rum become an acceptable tipple in polite society. In part, that was thanks to Erasmo Bermúdez, a political refugee from Venezuela who arrived in 1852. The formula and cask-aging process he perfected resulted in a drink smooth enough to be taken as a pre-dinner aperitif.
Modern variety
Four generations later, great-grandson Carlos Bermúdez presides over the firm that now produces eight rum varieties, including one made to the founder’s original recipe.
Later in the century, Andrés Brugal and his family settled in what is now the Dominican resort city of Puerto Plata. Today, Brugal ranks third on the list of world best-sellers and dominates the domestic scene, after waging a campaign involving the aggressive pursuit of market share, product line diversification, and successful overtures to new foreign markets.
The other brand cherished by Dominicans is Barceló, a favorite in Spain, which takes roughly half the firm’s total output.
The Dominican Republic supplies nearly a quarter of Europe’s rum. It has the greatest share of the market in Spain and Italy but not France, where heavier rums from Martinique are preferred.
International expansion
According to Mr. Bermúdez, there is still room for further overseas expansion.
“The European market is poised for growth, but we want to channel that potential towards our more expensive product lines. Europe prefers older blends, but under Dominican law, we cannot let our product age for more than a year and a half.”
That anomaly, he adds, has forced most producers to transfer their operations to free trade zones where the law does not apply.
More brands on a roll
Premium cigars are another specialty that have carved out a substantial niche in Europe and beyond.
The U.S. embargo against Cuba has made the Dominican Republic the number one supplier to its North American neighbor, including prized and pricey smokes such as Montecristo, H. Upmann, and Romeo y Julieta. Many of these world-renowned brands emerge from the Garcia Tobacco factory at La Romana, the world’s largest manufacturer of hand-rolled cigars.
The 27 different companies in the sector account for over 12,000 jobs. One family-run firm has been producing selected varieties of tobacco for six generations under the name of Corporación Cigar Export (CCE), and only since 2006 has undertaken the challenge of putting all that knowledge to use by manufacturing its own cigars.
So far, the Augusto Reyes Sixth Generation, Augusto Reyes Signature and Urban and City lines have been a remarkable success, according to CCE’s President Augusto Reyes. “We have a cigar that can compete with any global brand as to status, prestige, marketing support and overall quality,” he adds confidently.
Assured quality
At the same time, the firm continues to supply premium tobacco to other cigar makers.
“Smokers don’t like it when they can’t be sure of what they’re getting,” notes Mr. Reyes. “Our advantage is that we own our plantations and so can tell you where every leaf, every bundle, is coming from. That consistency is a big selling point.”
Unlike the long-established Reyes dynasty, the Arturo Fuente clan did not settle in the Dominican Republic until the 1980s. But their expertise led them to the rugged Bonao mountains, one of the few places in the country where Rosado leaf tobacco can be successfully grown. Its unique sensory overtones make it the ideal wrapper for the Fuente Opus X, rated by Cigar Aficionado magazine as the world’s most sought-after smoke, and the only top-of-the-line product made entirely from Dominican tobacco.
What does a Dominican pedigree signify to the smoker?
“Craft and consistency,” answers Hendrik Kelner, the current head of Procigar, the organization representing tobacco producers like his own firm, Tabadom Holding Inc. “Skilled artisans working by hand give you a cigar with a long, easy burn,” he points out. “Consistency means the best wrappers, binders and filler can be blended and balanced to compensate for variations in the harvest.”