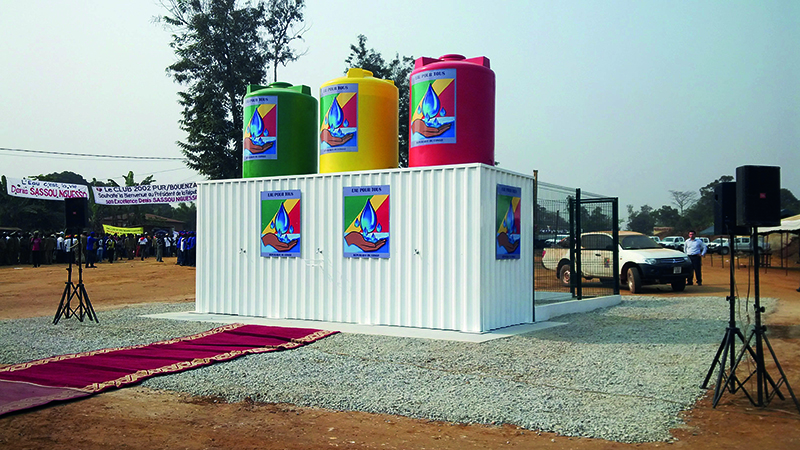 Brazilian company Asperbras has become an integral part of the Republic of the Congo despite being once known for its PVC piping and fittings. The company is now providing a huge array of services to the country and is also contributing to the Central African nation’s social welfare plans under the guidance of President Denis Sassou Nguesso.

The firm was started in 1966, when Francisco Colnaghi founded an agricultural products company based in Penápolis, a landlocked municipality in the state of São Paulo, Brazil. Over time, Asperbras became known for its expertise in PVC pipes and fittings, as well as its manufacturing of agricultural irrigation equipment. From these humble beginnings, it has blossomed into a household name, and one of the most widely recognized Brazilian companies both domestically and around the world.

Beyond the industries that helped get it off the ground, Asperbras is now known as a leading player in the realm of industrial engineering, but also manages projects in industries as diverse as real estate construction, mining, agriculture and energy. More than 5,000 employees are spread between the Brazilian states of Rio Grande do Norte and Bahia – where the company’s water purifying and sewage processing activities are centered – and Asperbras also has international satellites in Europe and Africa, namely in Austria, Portugal, the Republic of the Congo and Angola.

Since its inception, a huge component of the company’s work has been centered on giving back to the communities it operates in. In the Republic of the Congo, one of the company’s largest projects at the moment is Eau Pour Tous, or Water for Everyone, a project that involves the construction of 4,000 water pumps in rural areas across the country.

As part of this project, solar panels will also be installed for heating water, and reservoirs with a capacity of up to 9,000 liters will be constructed to ensure that there is always a backup supply, especially in times when rain levels fall short. Santé Pour Tous is another of the company’s initiatives, under which a hospital is being built in every administrative region of the republic. Twelve hospitals are being constructed in total, all in accordance with international standards, and each with 210 beds and a surface area of 130,000 square feet.

“The most important works and the most worthy projects of the Asperbras Group are the ones that contribute to ameliorating the lives of the people around us, and the ones that lead to the sustainable economic and social development of the countries we are present in,” says José Roberto Colnaghi, President of Asperbras and son of the company’s founder.

In Brazil, under the auspices of the Fundação Nelly Jorge Colnaghi, 230 children under the age of five are enrolled in school and receive free meals, literacy and English lessons, as well as ballet and judo classes. Students as well as their families are given access to dental services, as well as physiotherapy and other social and even psychological assistance, if needed.

Asperbras also operates Barretos Cancer Hospital, one of Brazil’s premier cancer facilities, which benefits from company funding for new technology, medicine and training for medical professionals that will equip them to better administer treatments for diseases such as AIDS and malaria. The hospital employs over 3,000 people and treats 4,000 patients per day.

Asperbras does not limit its social welfare to people however, and the environment is also protected. For instance, it supports Flora Tietê, a non-profit organization comprised of environmentalists and professionals who collaborate to ensure more sustainable consumption of Brazil’s natural resources.

It is active in more than 174 municipalities, and has overseen the planting of more than 31 million seedlings, which have since grown into 130 different species of trees, all native to Brazil. These seedlings are used to replenish areas that have suffered natural disasters or have simply been depleted by consumption, and Flora Tietê is always on call to help both small-scale producers as well as large companies who need technical assistance with reforestation efforts.

Asperbras built its reputation on being a company that manufactures safe, diversified products that are economically and financially sustainable. While it continues to be known for its production of PVC tubes and connections – indeed, it is the fourth largest producer of PVC tubes and connections in Brazil and manufactures more than 30 million tons of PVC per year – its active efforts involving industrial zone initiatives have also helped put it on the map beyond the borders of Brazil.

Asperbras has been participating in the industrial reconstruction of once war-ravaged Angola since 2004. Centered around the country’s industrial center of Luanda, Asperbras offers Angolan companies the technological solutions they need to implement changes that will help them better leverage their natural resources and more readily and sustainably diversify their economy.

Likewise, in the Republic of the Congo, and specifically in the region of Maloukou, near Brazzaville, a 262-acre industrial complex is being built that will house 16 factories where more than 20 different industries will produce various kinds of construction materials, including electric cables, PVC tubes and pipes, paint and metals, in addition to factories that process basic necessities such as milk and its derivatives.

As a result of the construction of this complex, as well as the construction of other facilities for the production of building materials, it is estimated that the Republic of the Congo will reduce its reliance on construction imports by 50%, while also stimulating the local economy with thousands of new jobs. Directly and indirectly, the Maloukou industrial complex alone is expected to generate some 10,000 jobs.

“The Congo is lucky enough to enjoy exceptional conditions for setting up industries that will allow it to make better use of the natural resources it is blessed with,” explains Mr. Colnaghi. “We have significant experience in the industrial sector, both in Brazil and around the world. Our strengths lie in setting up factories and training qualified personnel, and we won’t hesitate to put this experience to use for the benefit of the Congo.”

In 2009, also in the Republic of the Congo, Asperbras initiated an aero-geophysical and geological survey project. Using the latest geophysical equipment, the company produced an integral mapping of the country’s soil, which identified the mineral riches of the country. A team of specialized geologists, pilots and professionals with a background in terrain mapping all collaborated to provide an analysis which allowed professionals in the republic to fine-tune and optimize their mining efforts.

Back home in Brazil, a similar team also participated in the Icozeira Project in northern Bahia, which helped discover a new polymetallic mine that houses high purity iron, chromo, nickel and quartz. The environmental licenses and requisite positions are currently being obtained so that this mine may be legally and sustainably tapped.

In addition to this type of mineral prospecting, the Asperbras team is equipped to provide a range of services including: geological recognition, rock sampling, geochemical surveys, soil geochemistry, panning concentration, sound, and Geographic Information System (GIS) development, which allows for the capture, storage, consultation, and analysis of geographic data.

The tools used in all of these processes are cutting edge, and various methods are employed to ensure the best results. Among these is the magnetic method, which is the most common, as it allows for the detection of zones with strong mining potential, especially offering iron reserves.

Above the surface, one of the newest areas that Asperbras is venturing into is the farming of eucalyptus. Starting in 2011, the group’s agribusiness division began eucalyptus reforestation efforts and today supplies wood for Brazil’s pulp and paper industry. Intended to supply a soon-to-be-opened factory in Mato Grosso do Sul with enough raw materials to produce wood panels, the company’s plantations are expected to yield up to nearly 5.4 million square feet of medium-density fiberboard (MDF). There are also talks of expanding this eucalyptus supply project into a furniture manufacturing zone, in conjunction with a $300 million project that is expected to create up to 350 jobs.

While traditionally Asperbras has developed its stronghold in the industrial sector through its constant but steady evolution in manufacturing, the company began life developing irrigation systems for the agricultural sector. This is an area that has always been integral to the company’s mission, as ensuring a healthy food supply is fundamental to the wellbeing of local populations.

True to its Brazilian, meat-loving roots, Asperbras heavily invests in livestock and is forever adapting its pastures in order to improve the genetics of local cattle, thereby increasing the quality of the meat supply. Using an integrated crop-livestock system (ICLS), the company evaluates the sustainability of its rural properties and ensures that the right amount and type of food is being provided to its livestock. This is also true with regards to milk production, as the company operates factories that rely on state-of-the-art equipment to process, pasteurize and package Brazil’s Bonolat brand of milk.

Many of these experiences are now being translated into the African market and Asperbras has been using its expertise in partnership with President Sassou Nguesso’s government to improve the social welfare of the Congolese population. From milk to minerals, environmental protection to eucalyptus farming, and hospitals to industrial hangar construction, Asperbras has become an expert in building and commercializing programs, projects and constructions that are economically viable, financially sustainable and socially relevant.

“We grow by seizing new chances to better serve the needs of our clients,” says Mr. Colnaghi. “Where other companies may see obstacles, we see opportunities.”