Family Cigar: the seed of hope

Article - December 13, 2012
The history of the Arturo Fuente Cigars Company is a story of commitment to the land and people of the Dominican Republic 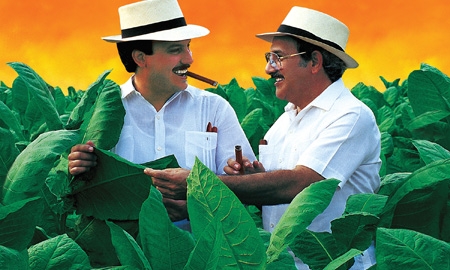 They say that it’s not about where you’re born, but where you live. The Fuente family understood this aphorism when they arrived in the Dominican Republic at the beginning of the 1980s. They had suffered many setbacks throughout their history, having resisted revolutions, embargos and fires from Cuba to Florida, from Nicaragua to Honduras. They arrived at Santiago de los Caballeros, the country’s tobacco capital, with tobacco bales on their backs. They had lost everything except for determination and perseverance.

Experience and ancestral cigar rolling technique, which the grandfather of the family Arturo Fuente had brought from Cuba, were the best weapons to overcome their misfortune and start from scratch.  They started making the best cigars in the world, and as a result, they achieved the impossible - they made progress in unchartered territory. The goal was to make the first 100% Dominican cigar. They had the know-how and some of the raw materials, which were used to make the inside of the cigar, but they needed the most valuable part: the thin layer that the cigar is wrapped in.

They chose to start the experiment in Bonao region, the island’s mountainous region. Here there was a tobacco plantation that had the most hours in the shade, a refuge from the unrelenting heat of the sun in the Caribbean. This is where Chateau de La Fuente was founded, the source of Opus X, the genuine Dominican cigar that would mark a new trend in the country’s cigar making industry; and a new history for the Fuente family.  “Our history is Dominican”, says Carlitos Fuente, proudly. Despite always feeling like a foreigner, he knows that this country has given him everything, and he is indebted to it.

He started to give something back to the country over a decade ago, by setting up a charitable foundation, called Cigar Family Charitable Foundation. This is where two families with the greatest cigar tradition in the world, the Fuente family and the Newman family from Tampa, Florida, worked together in a united effort. The foundation started operating in the Bonao region, in the area surrounding Chateau de La Fuente, a poor region which had suffered from violence a few years previous, and which today is virtually unrecognisable.

The first efforts they made were in providing food and schooling for the children in the neighbouring communities. The Cigar Family School quickly managed to reduce the figure for school absenteeism, and provided breakfast and lunch to many children in need. Soon after they implemented a medical assistance and vaccination programme to eradicate fatal childhood diseases, such as polio, diphtheria and hepatitis B.

That dream gave hope to thousands of families in the area, who assisted the foundation with their promise to provide a better future. Both adults and children got involved in the foundation, taking part in sports, cultural and environmental activities. Social canteens were set up, parks and urban infrastructure were built, and people volunteered to improve adult literacy. Summer camps were organised, and springs were filtered to provide drinking water.  Greenhouses were set up and there has been an increase in sustainable agricultural crops. Today, around 100,000 people from twelve communities in the surrounding area are benefiting from basic social services and they live more in harmony thanks to Cigar Family Charitable Foundation.

This hope now lies in the 400 children who attend Cigar Family’s primary and secondary schools, and the four classes that have registered for university. Cigar Family Foundation has planted the seed for a better future.