President Mauricio Macri’s message of integration with the international community has drawn the praise of foreign investors and world leaders.  Will it be enough to break with historical trends at home and establish long-term, inclusive growth? 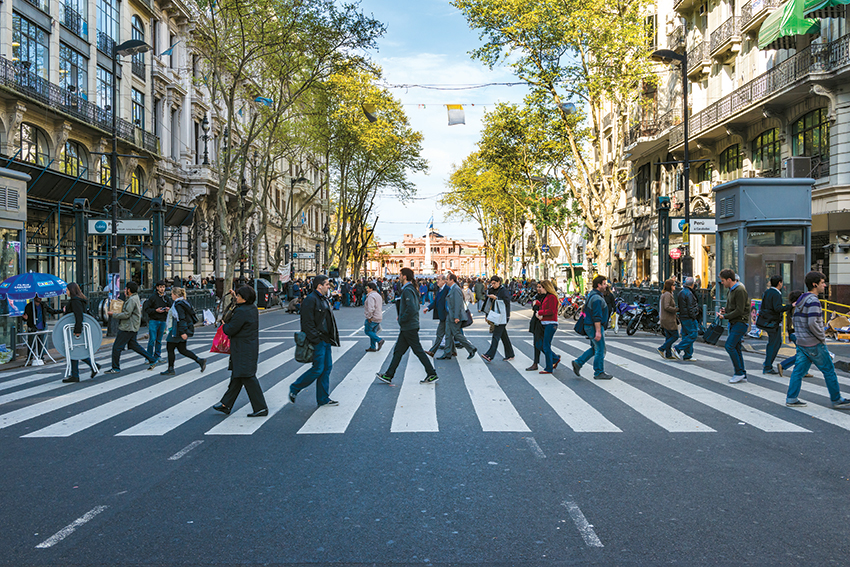 A century ago, Argentina was one of the world’s ten wealthiest nations, as the grand buildings towering over the streets of Buenos Aires attest. From the ornate Teatro Colón from 1908, one of the world’s finest opera houses, to the French-style Retiro railway station from 1915, the city’s architecture speaks to the glory of this once-eminent nation. But as a result of economic mismanagement by successive governments, Argentina is no longer synonymous with prosperity, and instead has seen its reputation damaged by the hyperinflation of 1989-90, the economic meltdown of 2001 and its run on banks, to its headline-grabbing loan default in 2014 with a group of holdout bondholders.

From the local and international investment outlook, however, it seems as if better days are on the way. President Mauricio Macri, elected in late 2015 on a platform of change and the country’s first center-right leader to come to power since it returned to democracy in 1983, has pledged to make Argentina “normal” again through a pro-business investment agenda to sustainably grow the economy and create jobs in order to reduce poverty.

The government has moved quickly with reforms but cautiously. President Macri’s Cambiemos (Let’s Change) coalition does not hold a majority in Congress, and needs to garner support from the opposition to advance its agenda. The government’s early reforms created enthusiasm with voters and investors alike, as it quickly dismantled currency and trade controls, committed to strengthen democratic institutions, and overhauled the government statistics agency to restore its credibility.

“There is an innovative political process underway. We are a young government, born out of the 21st century, and which doesn’t come with the ties of the past”

In perhaps the biggest win for the economy, Argentina finally cut a deal with the holdout investors to return the economy to the international bond market. What ensued was the largest emerging market bond sale to date, which not only netted it $16.5 billion in a hugely-oversubscribed offering, paid off holdout creditors from its previous default, placing it firmly back into the international capital markets.

“There was a before and after in the relationship with financial and multilateral global institutions,” says Luis Caputo, Minister of Finance. “We had already removed the FX restrictions, which had been well-received by the international community, but the game changer was the agreement with the holdout creditors. It was a key decision that affected the way everyone regarded Argentina; it was proof that we wanted to join the world once more.”

In an exclusive interview with The Worldfolio, President Macri emphasizes, “Cambiemos is not a force trying to impose change on Argentine society, but rather a representation of a change that has already occurred and continues to consolidate in the society itself. The changes that global society has undergone in the last couple of decades – globalization, new forms of communications and production, to name a few – have also taken place in Argentina. Our society looks at our past of cyclical crises and at the examples of countries that have been able to develop sustainably and sees that we can achieve much more if we come together and try to implement not only economic and political change, but also changes in values.”

Argentina’s transformation has not come without challenges. The administration encountered the first resistance early in its term as it began to remove energy and transport subsidies, which together were costing the government a staggering 4 percent of GDP. Many of its changes are in the short-term either unpopular, or unfelt. The government faces a major test in upcoming mid-term elections in October, when Argentines will take to the polls as a vote of confidence to the long-term goals put in place by the administration.

“The Cambiemos coalition is conscious of its political weakness if it doesn’t win the midterms, and it is also conscious of the fact that the previous four non-Peronist government did not serve out their full terms. Therefore, political stability and continuity is a central theme,” says Javier González Fraga, President of Banco de la Nación Argentina, the country’s national bank.

Working on political consensus has been key to building stability in the country. “There is an innovative political process underway,” says Marcos Peña, Chief of Staff. “We are a young government, born out of the 21st century, and which doesn’t come with the ties of the past.”

With problems at home gradually being ironed out, Argentina simultaneously looks to its region and the world to integrate itself in the global community. The remainder of Mauricio Macri’s term will be dotted with high-profile events to draw attention to the country’s transformation. Argentina recently hosted the World Economic Forum Latin America this month, and come 2018, it will be the first South American country to assume presidency of the G20.

To Mercosur, the near-moribund regional club of which Argentina forms a part along with Brazil, Paraguay and Uruguay, the Macri administration has injected new enthusiasm. Argentina, which formerly blocked expansion of the regional trading bloc, recently proposed a free-trade agreement between Mercosur and the Pacific Alliance at a summit in Chile. “With its extremely large market, endowed resources, and human and natural diversity, Mercosur is an enticing market for any global player,” asserts Vice President Gabriela Michetti. “Therefore, we must strengthen Mercosur as a platform for interaction with the rest of the world.”

“Our society looks at our past of cyclical crises and at the examples of countries that have been able to develop sustainably and sees that we can achieve much more if we come together and try to implement not only economic and political change, but also changes in values”

Ms. Michetti adds that the President has asked every member of government to work on transforming Mercosur into a real customs union rather than one hampered by protectionism and red tape.

Argentina is also looking further afield to build trade ties, from the U.S. to Asia and beyond. “The notion of being integrated to the world in terms of investment, trade, technology and ideas has to be reinforced by every area in the state,” says Mr. Peña.

There is another goal on the horizon for Argentina, and one which would have been unthinkable just a couple of years ago: to become a member of the OECD. “Our goal is to take as little time as possible,” says Mr. Caputo. “In the case of Chile, the process took three years. We are putting a lot of effort into this, and we have a lot of support from the international community.”

While strides have been made in putting Argentina on the path to sustainable development, everyone in the government accepts that there are challenges ahead. “We have to live up to our promise of a different type of government: a more honest one, one that is closer to reality and has a more pragmatic view,” explains Mr. Peña. Thus far, however, the international community has reacted to Argentina’s change: “A dozen of heads of state and heads of government visited Argentina in 2016, which comes to show that the world acknowledges this new period of trust, solidifying institutions and strengthening the rule of law,” says President Macri. And as the government continues to implement its reforms, for many investors, Argentina is well and truly back on the table.