Article - July 30, 2014
The republic’s First Lady, Antoinette Sassou Nguesso, established the Congo Assistance Foundation (FCA) in 1984 as a non-governmental organization promoting social action in the areas of health, development, education and vocational training aims, and has received international acclaim for its humanitarian efforts 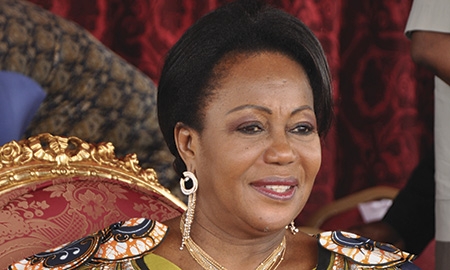 In November 2013, surgeons from the Republic of Congo and France performed surgery on six Congolese children with heart conditions. All the children were from poor families and didn’t have the means to pay for the life-saving surgery. But none had to, thanks to the Congo Assistance Foundation (FCA).

Congolese First Lady Antoinette Sassou Nguesso set up the FCA in 1984 and is still very active in running the foundation today. Working with international partners in the private and public sectors, the FCA works to improve the lives of the people of Congo, particularly the poor and the very young. More than 40% of the population of the Congo is under 14 and nearly half live below the poverty line.

The FCA distributes aid to victims of tragedies, trains women to take on senior management roles, and is trying to bring an end to the damaging cultural practice of female genital mutilation.

It has teamed up with Morocco to build schools in remote parts of the Congo, and with China to provide generators, funds and mills to make the local staple, fou-fou, available to HIV sufferers, women’s groups and religious organizations. But the foundation’s hallmark projects focus on health. Its aim is to try to make quality medical care accessible to all, regardless of financial means.

Since 2000, the FCA’s main healthcare projects have focused on the treatment of chronic illnesses, including HIV/AIDS, cancer and heart disease.

In a joint project with the foundation, French doctors returned to the Congo in June to operate on more Congolese children with heart disease.

Women in the Congo are provided with Viramune – a medication that prevents mother-to-infant transmission of HIV – free of charge for five years, thanks to the foundation. And the FCA helps to pay for antiretroviral drug treatment for the country’s poor.

The foundation’s work to fight AIDS has won it praise from UNAIDS chief Michel Sidibe, who said at a high-level meeting on HIV/AIDS in New York in 2012: “Congo is one of those African countries that have shown it is possible to bring this infection under control, that it’s even possible to significantly reduce the number of new infections.”

The FCA not only wages a relentless campaign against deadly diseases, but also strives to improve healthcare in the Congo by bringing cutting-edge medical facilities to the country. The foundation has signed a partnership agreement with German firm OncoInvest to build a cancer clinic that will provide treatment for all types of cancer, for all Congolese, regardless of financial wherewithal. Treatment for the poor will be covered by a fund run by the foundation.

The FCA has also become the voice of sufferers of the most frequent genetic illness in the world – sickle cell disease, a group of disorders that affect hemoglobin, the molecule in red blood cells that delivers oxygen to cells throughout the body. People with the disorder can be anemic, prone to infection, and experience episodes of severe pain.
In Congo, the government provides free medical consultations to children afflicted with sickle cell disease, and in 2013 the FCA laid the cornerstone of a new national center for the disease at the University of Brazzaville hospital.

But possibly the jewel in the foundation’s crown is a project that has not yet seen the light of day: the Institute of the Heart of Congo. The foundation is building the center with French NGO La Chaine de L’Espoir – the group that carried out the pediatric heart surgeries in November and June – and even before it has been built, the institute is being hailed as the cardiology hub for the entire Congo Basin region. Expected to be up and running in 2015, it will provide critical cardiac care for the people of the region and long-term medical training for Congolese medical personnel.

“I’ve been lucky in life,” Mrs. Sassou Nguesso says, explaining the raison d’etre of the FCA. “Fame gives us the chance to divert the light that has shone on us so that it illuminates the lives of people in need.”