Guayaquil is a city with a purpose, and that is to make sure its visitors have a good time. One of Ecuador’s most versatile destinations has polished its tourism act, presenting today’s visitors with a multi-tiered offering 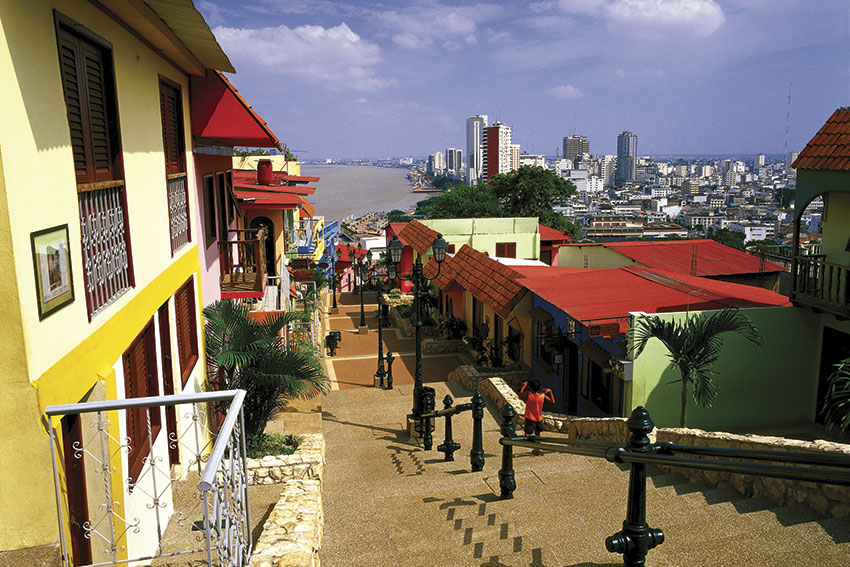 GUAYAQUIL HAS AN ARRAY OF CULTURAL, ARCHITECTURAL, NATURAL AND GASTRONOMIC DELIGHTS THAT HAVE MADE IT ECUADOR’S NUMBER ONE DESTINATION
SHARE

G uayaquil is Ecuador’s largest city, with a thriving manufacturing base, but rivaling this dynamic commercial activity and growing in tandem over the last decade has been the city’s blossoming tourism sector. From a tropical climate and rainforests within a 30-minute drive to shiny new infrastructure like the Malecon 2000 riverside boardwalk (one-and-a-half miles of pure tourism delight featuring museums, gardens, fountains, shopping, restaurants, bars, river cruises and South America’s first IMAX theater), Guayaquil has it all.

And it’s not just Ecuadorans who are in on the secret. The city is drawing a growing number of visitors from abroad, many of whom arrive on one of the many cruise ships that pull into port each year. Today, the Pearl of the Pacific attracts over a million annual visitors. These travelers have learned, as Gloria Gallardo, Director of Public Enterprise for Tourism and Civic Promotion, says, “Guayaquil is unique”.

In 2011, residents voted on the city’s top seven attractions under a promotional campaign titled “The Seven Wonders of Guayaquil,” choosing architectural marvels spread through the urban spread that were most emblematic of Guayaquil’s rich history and modern transformation. Along with the Malecon 2000 (which sits on the site of the famous meet between Simon Bólivar and José San Martin during the country’s War of Independence), Guayaquil’s natives identified the historic Las Peñas neighborhood near the boardwalk with its pastel-colored, colonial wooden mansions reminiscent of New Orleans French Quarter. No less than 11 Ecuadoran presidents once resided in what is the city’s oldest neighborhood. Nearby is a third wonder: the semicircular Bolivar-San Martin monument, a lasting tribute to that historic meeting between South America’s famed liberators.

The remaining of the seven wonders includes the neo-gothic Metropolitan Cathedral with its impressive stained glass depictions of the apostles, along with the Municipal Palace and the Moorish Watchtower (topped with an Arabic Byzantine dome). Lastly there is the Salado Estuary Pier, built in 2009 as part of Guayaquil’s urban regeneration project. It is set amidst mangroves and tropical gardens and offers visitors an idyllic outdoor area for concerts, fountains, and monuments. Indeed, thousands visit each day. The Pier’s Writers’ Walkway pays homage to five native scribes. Salado Pier also boasts seafood square, with a food court solely dedicated to Ecuadoran maritime delicacies and suitably adorned with the Fish in the Water sculpture. Nearby is the grand 9th October Avenue, boasting no less than 23 national heritage buildings. 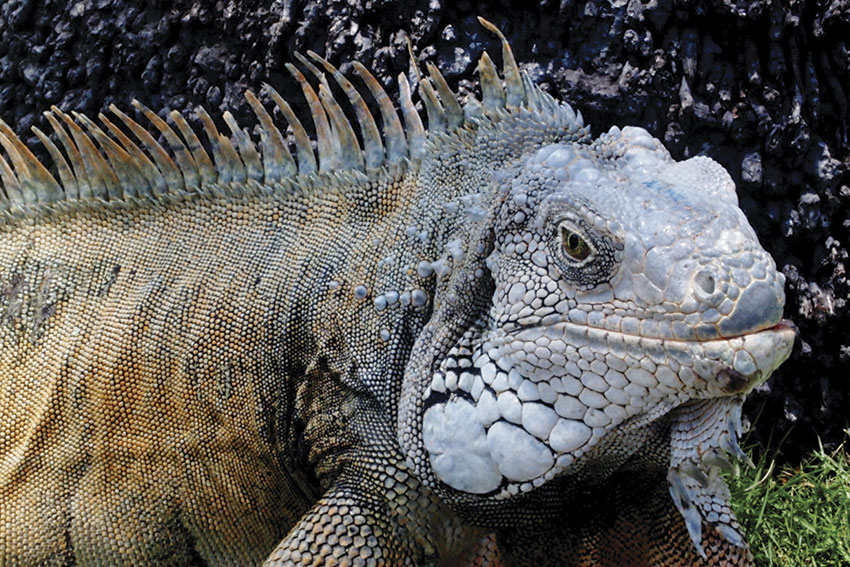 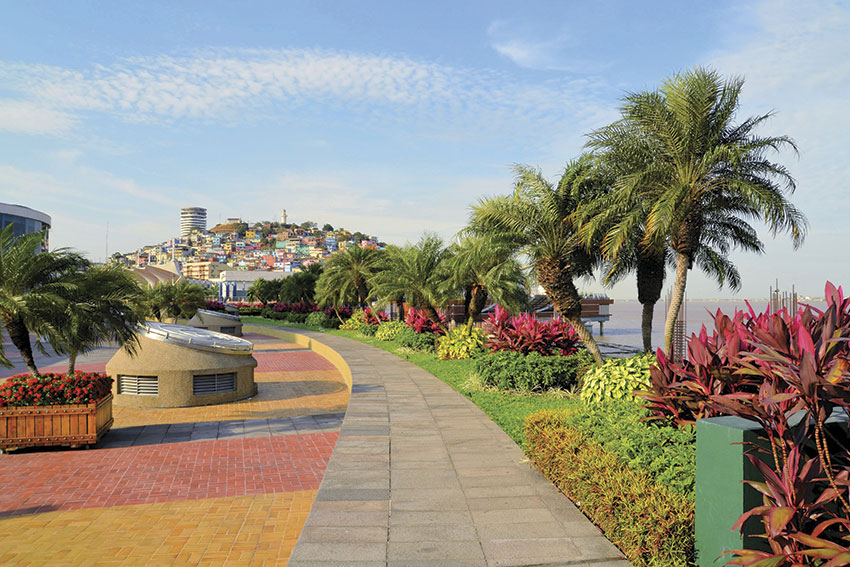 Not surprisingly, Guayaquil is fast gaining fame as a premier event and conference destination. Hundreds of regional events are pulling in over half a million participants each year, and the city’s authorities are intent on seeing these figures rise further through events like this year’s World Cocoa Summit, according to Ms. Gallardo.

“Guayaquil is going to be a major conference and convention hub. It has all the necessary ingredients. We have hotel capacity and uncongested transit routes. We have an airport that is classified as best in the world in its category. We are going to have a completely digitalized city. Guayaquil is the first city in the region to have free WIFI throughout the city, which is very important for business tourism,” she says.

In order to grow as a conference destination, the city has created a conventions bureau, which, through membership in international MICE (Meetings, Incentives, Conferences, Exhibitions) bodies, is working to establish the city as a destination. “We have just finished a market study in the convention segment, we know where we want to go and we have a strategic plan to get there.”

Once these visitors arrive, they will soon discover another great Guayaquil asset is its gastronomy. This city is especially concerned with its belly and foodies are in for a gastronomic journey sure to delight. Seafood and shellfish are a daily fare in this town, which boasts a cuisine of mixed Ecuadoran, European, and Chinese influence. Shellfish and fish cebiches, fried pork, cheese dumplings, and corn and meat stews are all typical dishes. Guayaquil now hosts a large annual food fair called Roots that draws chefs and visitors from around the world (over 60,000 visitors in the last editions).

It is precisely the city’s well-rounded offer that is behind the new municipal promotional campaign, “Guayaquil is my Destination.” Intended to emphasize Guayaquil’s tourism wealth as a long-stay destination, the promotion makes a clear statement that the city is no longer just a layover stop, but has become a worthy destination itself.

“Guayaquil is going to be a major conference and convention hub. It has all the necessary ingredients. We have hotel capacity and uncongested transit routes. We have an airport that is classified as best in the world in its class”

The campaign, which boasts its own online presence with photos, virtual tours, and smart phone apps, “aims to increase awareness of the city’s history, its museums, and its natural heritage as well as its unique gastronomy,” says Ms. Gallardo. But, she adds, it is just as much for the city’s residents as it is for their visitors.

“‘Guayaquil is my Destination’ is a concept that is applied civically as well as in a touristic sense. It is the tourism brand for the city, but it is also a civic campaign. We have never stopped working on the civil side of things. If the people of a city do not love their city, they will not be participants in its progress nor in positive change, and their participation, along with pride in their homeland, is what drives them to be part of that progress,” says the tourism director.

“So Guayaquil is my destination because it is my great home, it is where I make my dreams come true, where I live with my family and where all my opportunities lie. Guayaquil is a guitar, its soccer, it is a song. It is the city by the river, the city of the estuary. It is a cradle of freedom. All of these things make this historic city unique.”

The average guy, the man on the street, Juan Pueblo: when Guayaquileans were asked to choose a mascot for their city in 1992, they chose John Doe, or in their case, John Town (Juan Pueblo). Since then, the average Joe has become a symbol of Guayaquil, not surprising given the city’s working class roots and spirit of entrepreneurialism.

But Joe, originally from a poor background, has since grown from his humble roots. Featured in the city’s promotional, cultural and civic campaigns, he is now better dressed, sporting a white guayabera and sky-blue pants, the colors, not coincidentally, of Guayaquil, and upwardly mobile.

“He is an icon of the city, of the people of Guayaquil,” says Gloria Gallardo. “He loves Guayaquil, stands up for our biggest causes, is involved in and excited about the city’s progress and urges everyone to take part in it. That is Juan Pueblo.”

Now Juan has a new partner (“What man can stand to be alone?” asks Gallardo), Juanita Pueblo, a symbol of the modern Guayaquilean woman, university educated, a professional, and head of the family in many cases. “There was nobody representing our women, and that was a massive oversight, because Guayaquil’s women are part of our history, our traditions, our culture and our progress. They also form part of the city’s economic heartbeat. Guayaquil’s entrepreneurialism is represented in large part by women. It’s impressive. And nothing existed to represent this,” she explains.

Juan Pueblo appeared in public with his new girlfriend for the first time this year at the Valentine’s Day parade. Wearing a sky-blue and white dress and a tiara, Juanita was warmly received by a pleasantly surprised crowd of Guayaquileans. “People loved her. Children, senior citizens, young people, everybody was lining up to have their photo taken with Juan and Juanita,” reports Gallardo. “She was an instant success.”