The PIB, a "win-win situation for everybody"

Article - August 5, 2013
The Petroleum Industry Bill will transform the Nigerian oil and gas industry for the benefit of all stakeholders 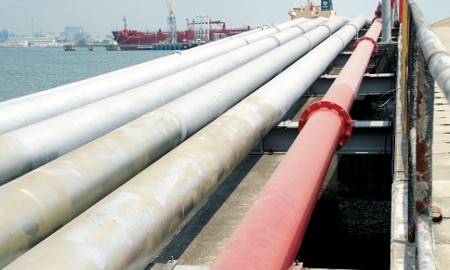 TODAY, AROUND 10 PER CENT OF NIGERIAN CRUDE OIL PRODUCTION IS UNDERTAKEN BY NIGERIAN EXPLORATION AND PRODUCTION COMPANIES
SHARE

The long-awaited Petroleum Industry Bill (PIB) is set to completely overhaul Nigeria’s oil and gas industry, by effectively entrenching transpar-ency and accountability in the conduct of oil business. The bill will introduce a new fiscal regime that will see the state reap larger benefits from the lucrative sector. It will also assure that transparency, accountability and good governance are the order of the day, and that more indigenous companies and people are involved in the industry.
Investment has been stagnant, but it is expected that once the PIB is passed, waves of foreign capital will once again pour into Nigeria and new explorations will kick start again. The bill has been the centre of heated discussion and intense debate for five years now, with the government, international oil companies (IOCs), indigenous companies and local communities all seen as stakeholders. It is hoped that the bill will be passed soon for the benefit of all.
“It has been at the heart of government. Oil is the mainstay of the economy and it is important to focus reform on this,” says the Group Managing Director of the Nigerian National Petroleum Corporation (NNPC), Andrew Yakubu, who is certain that the PIB will result in a “win-win situation” for all involved.
There has been some understandable opposition to the bill from IOCs already operating in the country. They worry that the new fiscal regime and focus on local content could see them lose more of their profits through higher taxes and fewer incentives, as well as weaken their foothold in the market. But Mr Yakubu believes that the IOCs have no justifiable reason to worry as their operational environment under the proposed law is still favourable for profitable business. He noted that the IOCs have, over the years, benefited a great deal from their operations in Nigeria under various oil regimes and that it is time they started to give a little more back to the country and communities in which they operate.
“We have looked at the regimes in other countries, and we have come up with what we believe should be a win-win situation. We believe that the PIB should be viewed as a comprehensive and holistic document by all stake-holders. If this is done, each stakeholder will find out that they have a lot to gain. For example, the benefit of running a transparent, predictable and accountable oil regime, which the PIB will entrench, more than compensates for any marginal losses the IOCs may suffer from the proposed fiscal regime. It is important that we create a conducive environment for all stakeholders to participate, and benefit from their participation,” he explains.
Apart from the restructuring of the industry, the bill will also see the restructuring of the NNPC itself. This is one of the “key objectives” of the PIB, according to the NNPC boss, which will “separate policy from regulation and from commercial activities.” “I believe that this is a very positive thing to do, namely to separate these functions clearly, so that NNPC will be a clear commercial entity. In so doing, we can clearly develop our model and define our inputs and our expectations. Decisions will be taken in a purely business-like manner. I think that is a very positive side of the PIB.” The NNPC will be restructured into three separate entities: a vertically integrated national oil company with a clear focus on both upstream and downstream activities, a national gas company, and a national asset management company. According to the GMD, the gas company will be a joint venture project with IOCs. Further deregulation of the downstream sector under the bill will also be a welcome move for investors and is also encouraging more indigenous enterprises to get involved in the value chain.
Speaking on deregulation, the NNPC MD says: “Currently, we operate in a regulated petroleum product market. The partial deregulation of the downstream has also witnessed an upsurge in indigenous players in the sector. You will recall that private refineries and petrochemical plants are being developed and we are seeing on the horizon significant increase in private sector participation in the downstream and mid-stream sectors.” The PIB is a clearly positive step for local companies and communities as they will become more involved in the industry. A stronger focus on local content, which began in 2010 with the creation of the Nigerian Content Act, is one of the main objectives of the bill.  “We have a growing and vibrant pool of indigenous exploration and production companies contributing about 10 per cent of Nigerian crude oil production,” states Mr Yakubu.
“NNPC and the government have consistently encouraged development of indigenous companies through various schemes. Wider participation of Nigerians in the industry was further strengthened by earlier legislations and the recent enactment of Nigerian Content Act.” The PIB will also obligate IOCs to hire and train more Nigerians and to take on a greater number of local contractors. This focus on community development and involvement will also help to quell the security threat even further. Community hostilities which have led to instances such as vandalism of pipelines were spurred by local communities feeling alienated from the industry. There has also been the general sentiment that the huge revenues are completely bypassing them and that they are seeing no benefits from the lucrative industry. “The good thing about the PIB is the community aspect of the bill. There is a clear focus on involvement of the community. We believe that this is a very good direction. The communities of the oil producing areas are stakeholders, and they are also direct beneficiaries of investment,” says Mr Yakubu. “So it is win-win for the investor, government and the community. That is a very strong tripod.”