Article - October 24, 2013
Rock-solid partners in good times and bad, the UK and Kuwait are opening the door to a new wave of ventures 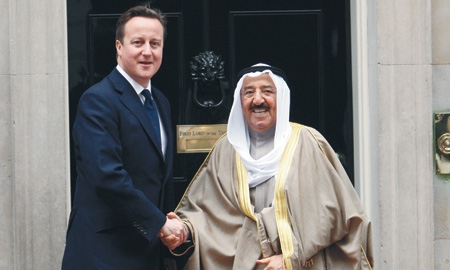 The solid bilateral relations between Kuwait and the UK that go back more than 200 years have never been stronger. On all levels – royal, diplomatic, political, economic, social, cultural and emotional – the two nations share close links that both sides are determined to tighten even further.

During a speech to the National Assembly in Kuwait in February 2011, Prime Minister David Cameron affirmed both Governments’ pledge to double bilateral trade by 2015 to £4 billion per year and stated: “Ours is a partnership based on a shared economic future, as we need our economies to grow and diversify in this challenging globalised world.”

“Right now, the ties are at an absolute zenith,” says Sheikh Mohammad Al-Abdullah Al-Mubarak Al-Sabah, Minister of Cabinet Affairs and Minister of Health.

“This is because we in Kuwait value loyalty very much. The British came to our aid at three of the most important historical times in Kuwaiti history: in 1899 when the Persian and Ottoman Empires were at odds and wanted to lay claim; in 1961 with the attempted Iraqi invasion (very few people remember this – it was actually called Operation Vantage); and then in 1991 – we will never forget Margaret Thatcher’s pivotal role in Kuwait’s liberation from Saddam Hussein’s attack. As a result, Britain and everything British has always held a special place in Kuwaitis’ hearts.”
This year the Kuwait Investment Office in the City of London celebrates its 60th anniversary. The overseas headquarters of the Kuwait Investment Authority, the emirate’s sovereign wealth fund, it has invested some £150 billion over the decades, the majority of which has been in the UK. On an official visit to Kuwait in February, the Lord Mayor of London Roger Gifford noted: “Much has been achieved to foster the mutually beneficial ties between Kuwait and the UK, but much more can still be done.”
Reflecting the magnitude of the alliance, Kuwaiti Ambassador to the UK Khaled Al- Duwaisan notes: “The largest Kuwaiti embassy in the world is in London – our embassy here is bigger than in Washington, Paris or Moscow.”

Also in London is the new UK-Kuwait Business Council that launched in May. The Council is chaired by the UK Prime Minister’s Trade Envoy Lord Jonathan Marland and comprises eight British and eight Kuwaiti chief executives meeting twice a year to work on expanding trade and collaborations in both countries.
“Kuwait has rightly identified that the development of SMEs is a critical way forward,” comments Lord Marland. “That will be very much in tune with the British thought process. We have a huge amount of SMEs in the UK and they are the beating heart of our nation’s endeavour. It is the way that you diversify – the more businesses you have, the bigger the range of business activities.”
Kuwait’s ongoing drive to diversify its economic base away from petrodollars means investors would do well to look into expanding the emirate’s mass transportation, logistics and social infrastructure, as well as upgrading the education system and enhancing its healthcare offer, according to Paul McKay, Chairman of the British Business Forum (BBF) in Kuwait.

“There are signs that that Kuwait’s business environment is improving as the Government moves from operator to regulator roles,” he says, citing the country’s new companies law announced this year as an example of a more level playing field emerging for investors. He also stresses that the value of advice on doing business in the emirate and personal relationships cannot be underestimated, adding: “It is imperative for any British investor understands and considers local culture and expectations, especially when seeking business.”

The BBF offers individuals and companies investment advice on entering Kuwait and provides a springboard to market access. “Too often cautiousness about entering the Kuwaiti market or the wrong advice prevents opportunities from being met,” says Mr McKay.
UK Ambassador to Kuwait Frank Baker believes UK investors should look at infrastructure in particular, with new airports, metro systems and even cities planned. “There will be great opportunities for British firms to either be the main contractors or the subcontractors on what are going to be some absolutely critical developments,” he says. “Although the private sector is small, it is hugely dynamic. You have some outstanding people working in it. It needs to be expanded, but you have got the educated population, and the ability and the hunger of Kuwaitis to go and work in the private sector.”