Mongolia’s underdeveloped road sector has great potential to be an engine for the country’s socio-economic growth. The National Development Strategy looks to help achieve this potential, while the government also eagerly invites foreign companies to invest in projects. 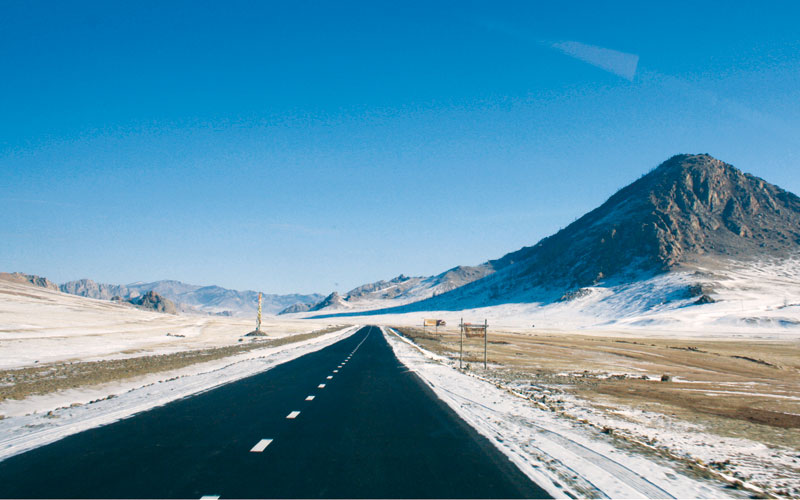 Mongolia’s National Development Strategy considers road infrastructure to be a key instrument in fostering regional development and hopes to have an entire national paved road network (6,990 miles) completed by 2021. In addition to the $300 million that the Mongolian government has already allocated for this grand undertaking, foreign investors are in high demand to help finance related projects.

“We are looking for investors in mining, energy and transport infrastructure for the $50 billion mega projects that we are going to do in the next 10 years,” says Amarjargal Gansukh, Minister of Road Transportation.

Like his peers in the road sector, Mr. Gansukh believes in the huge potential the sector has to serve as a catalyst for further development, the creation of jobs, and greater interconnectivity between Mongolia and its neighbors – something which is direly needed in a country where rural to urban migration has severely impacted its demographics.

“Ulaanbaatar city was planned for 500 to 600 thousand dwellers,” says Bayarsaikhan Tsevelmaa, Mongolian Minister of Construction and Urban Development. “But in the last years, due to migration from urban areas, the city currently has more than 1 million dwellers. As a result, we emphasize the importance of developing not only Ulaanbaatar city, but also other cities around the capital city including Darkhan, Baganuur, Choir and Zuun Mod.”

In addition to government support for its road expansion projects, the sector also benefits from the assistance of the Mongolian Road Association (MRA), a non-profit, non-governmental organization established in 2008. Last year, the association organized the first annual Road Expo Mongolia, an event which united a multitude of companies and distributors to showcase their technologies and services.

“The world’s latest road technologies and equipment have already been imported to Mongolia, but most people are still not well acquainted with them,” explains MRA’s president, T. Byambaa. By creating events like Road Expo, he hopes to show Mongolians that the sector’s development is a wellspring of untapped potential and a prime means of stimulating employment, providing more efficient transport of mining resources to foreign markets, and fostering broad-based economic growth.