Article - December 18, 2013
Along with the UK Government, British business is becoming increasingly more active in the African nation, helping it to build a more successful, prosperous and diverse economy 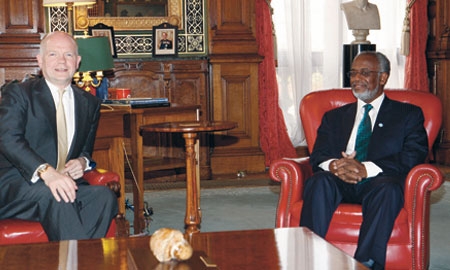 As a former colony of the British Empire, Sudan shares an inextricable link with the United Kingdom. And ever since Sudan’s independence back in 1956, it is a relationship that has continued to develop in terms of diplomacy, cooperation, trade and investment.
In their recent bilateral meeting in London this May, British Foreign Secretary William Hague and the Sudanese Minister of Foreign Affairs, Ali Ahmed Karti, reaffirmed their commitment towards the two countries’ longstanding and constructive partnership.
Apart from acknowledging the good progress being made in Sudan’s relations with its southern neighbours, Mr Hague also pointed to several UK-Sudanese cooperation projects which are being implemented in the fields of capacity building and English language teaching.
Commenting on the bilateral meeting, Minister Ali Karti added: “The relationship between Sudan and the UK is a very long and historical one. I hope we can work together to bring back the golden old days, and to work to promote relations between the two countries in every walk of life.”
Meanwhile, both parties
also praised their growing business ties which have been worth more than £2 billion in the past 10 years alone. Like the rest of the European Union, the UK operates an arms embargo in Sudan but continues to trade in non-military goods and services, resulting in increased commerce over the past decade.
Minister Ali Karti underscores this small commercial renaissance, saying: “Business with the UK has increased to the degree that embassy staff who were relocated to Khartoum are now back in London.”
Collectively, the EU is Sudan’s third largest trading partner and the UK accounts for around 20 per cent of this business, making Sudan one of the UK’s largest African partners.
Reminiscing about the years during and following Britain’s colonial rule when business between the two countries was at its absolute peak, Minister Ali Karti says: “We share a history of existence, the British have been in our country for more than five decades, throughout that period we enjoyed the company of so many good people who had been appointed to administrate our country and who had been shouldering so many responsibilities. The British were doing a lot of jobs within a very tough atmosphere.
“Education was also implemented in Sudan throughout that period. It connected so many Sudanese and scholars with British culture and the English language as well as in other fields of studies, such as the common law system. Our cities were planned according to the common law system. In the fields of trade and economics, our economy was closely connected to the economy of the UK.
“The UK was our best trading partner for a long time and much of the country’s infrastructure was built by British companies,” he says, full of optimism that these days will soon return.
“Our heritage is based on that and from our side we have the intention and determination to go back to that history of support and engagement, whether in the field of culture, language and sciences or trade and investment.”
The UK Government likewise appears open to strengthening business links following the UK Trade and Investment (UKTI) trade mission to Khartoum earlier this year, producing a brochure for British firms interested in the country’s possibly lucrative sectors.
Attracted by its massive potential, a number of British companies are already active in Sudan, while UKTI is also promoting the country as one that offers plentiful and “profitable business opportunities” in industries including gold and copper mining, oil exploration and construction.
Elsewhere in Khartoum this May, in another important step for positive UK involvement in Sudan, the British Embassy celebrated the opening of its brand-new residence.
Welcoming guests at the event, British Ambassador to Sudan Peter Tibber said: “The house is new, but the British-Sudanese relations to which this house makes its concrete contribution is old, long-standing, and constantly refreshed.”
Apart from its improved UK relations, Sudan has also been working since 2007 through the non-profit, non- governmental organisation Bridges International to help the country cultivate avenues for more positive communication with the rest of the world, with the overall aim to promote harmony within Sudanese society, with all its various factions, ambitions and aspirations.