A life worth living

Article - March 12, 2013
The administration of Governor Sule Lamido is focusing strongly on empowering people through comprehensive human development programmes that are already showing impressive results in raising living standards for the people 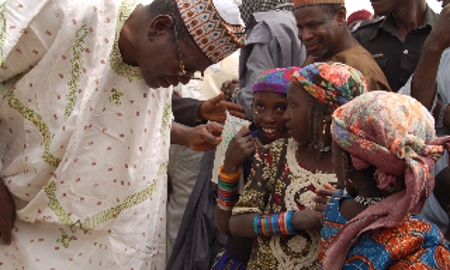 Alhaji Sule Lamido has high hopes for Jigawa State, and rightly so. Governor since 2007 (he was re-elected in 2011 with a landslide victory), he has had his hands full pushing through reforms and budget allocations that reflect the real needs of his state.
“As a government, we have to be transparent and accountable,” he says. “It should be clear that whatever we do as a government is for the people. We should operate in a way that builds trust and national pride.”
Since coming to office, Mr Sule Lamido has placed a good deal of attention on improving the state’s education system, as well as healthcare, infrastructure, agriculture and industry. In early 2010, federal Minister of Education Hajiya Aisha Jibril Dukku paid a visit to Jigawa’s educational institutions and noted that what she there was astounding – so much so that Jigawa had left many states in its shadow.
For Governor Sule Lamido, a better education for the state’s inhabitants represents one of the quickest and most sustainable ways to build a safer and more stable society.
“Civil unrest is often a result of extreme poverty. I believe that we bring ourselves a step closer to peace if we invest more in education, human resource development and generating gainful employment,” he says. “We need to support the social sector to better address the people’s needs and uplift those in abject poverty. I find that the main driver of insurgency is the fact that certain parts of the population feel that they have been marginalised. Someone with a good future is less likely to be brandishing a weapon and risking his life – and harming others in the process – in search for social justice.”
This year, the state budget allots some 8.2 billion naira (£34.7 million) for education at the basic, post-basic and tertiary levels, while healthcare will receive 1.4 billion naira. HIV-AIDSD and malarial control programmes, free maternal and child healthcare programmes, tertiary healthcare services, supplementary immunisation and nutrition activities and environmental health programmes will all be covered by the budget, as will schools of nursing, midwifery and health technology.
In terms of physical infrastructure, 63 billion naira was spent on road development from the beginning of Governor Sule Lamido’s term through mid-2012. The result was the construction of 1,300 kilometres of roads, which, as state Commissioner for Works and Housing Alhaji Baba Santali, said last year, was part of a “people-oriented policy designed to enhance road transportation and open up the state.”
Agriculture is one of the economic mainstays in Jigawa, given the state’s abundant arable land. During the rainy season, some 70 per cent is cultivable, and irrigation schemes are in the works to ensure that during the dry season, agricultural activity doesn’t wither. Moreover, earlier this year, the state government adopted proactive measures to further encourage dry season farming, such as making fertiliser, seeds and other inputs more readily available and providing tube wells and pump machines for irrigation farmers.
In 2010, the World Bank’s Doing Business in Nigeria report rated Jigawa as the “best place to pursue a business enterprise based on the indices for conducive business and investment climate.” A better educated and healthier workforce and enhanced infrastructure will no doubt make Jigawa an even more enticing place for investment.
Governor Sule Lamido sees possibilities for greater collaboration with the United Kingdom, and believes investments in his state are a smart move for the long term. “I feel that Jigawa has the ideal environment and the strategic advantage for well-placed investments to thrive,” he says.