ECAir is Congo’s national airline, with plans for international routes across Europe and the Middle East 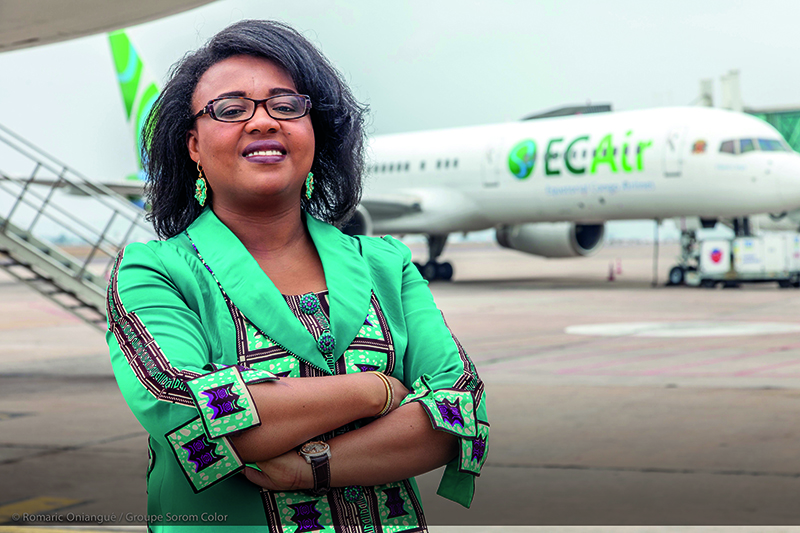 The Republic of the Congo’s motto of “Unity, Work, Progress” has now resulted in expansion, industrialization and manufacturing growth and there are also new plans to improve transport links. Better travel options within the country had been limited due to financial constraints following armed conflicts in 1997 and 1998, with the focus previously targeting rebuilding basic utilities and social support – but things are now changing.

Some of these developments have been driven by the 2015 All-Africa Games, which will be held in Brazzaville, September 4-19. The event requires new roads to the newly-built arenas and transportation routes to handle the anticipated flow of visitors. To deal with the influx, a new international airport is currently under construction at Pointe-Noire, which will be a replica of the airport in Brazzaville.

Elsewhere, plans for building new domestic airports and renovating others, such as Oyo-Ollombo Airport in the north, are being drawn up thanks to the Republic of the Congo’s National Agency of Civil Aviation. Meanwhile, the responsibility of generating profit and increasing visitation rests with Equatorial Congo Airlines, known as ECAir.

ECAir currently has 128 flights in its regional network and beyond, flying from Brazzaville to international destinations that include Douala (Cameroon), Dakar and Paris. It also holds the distinction of being the first pan-African airline with three weekly flights to Dubai.

ECAir’s most frequent route is Brazzaville to Pointe-Noire, which can run up to seven times daily. Their newest route to Bamako in Mali and Dakar, which will run three times weekly, was inaugurated on March 22, 2015 using a Boeing 757 equipped with 16 business and 132 economy seats.

Despite predictions that airline companies in Republic of the Congo could not be profitable for the first three years of operations, the International Aviation Transportation Association has predicted annual growth of 7.2% between 2013 and 2017.

These projections show optimism over the airline’s future, especially when combined with plans for the 2015 All-Africa Games and the nearly 30,000 members in ECAir’s loyalty program ‘Mbote’, and sentiments expressed by Fatima Beyina-Moussa, the Managing Director of ECAir.

“Generally speaking, in Africa, this sector is expected to grow, because of the numerous niches that can be exploited,” she says.

Mrs. Beyina-Moussa has been with ECAir since its inception in 2011, leaving a job in the Ministry of Economy and Finance, and was named the 2015 President of the Association of African Aviation Companies (AFRAA).

Previous international routes resulted in passengers spending countless hours in transit on their way to Paris or Dubai, situations that AFRAA and ECAir are hoping to change. Domestic travel was almost no better: before airlines began operating daily flights between Brazzaville and Pointe-Noire, the only option was a nine-hour drive.

Currently, AFRAA companies are working to create airport hubs to facilitate civil aviation transit with the ultimate goal, says Mrs. Beyina-Moussa, “to operate as many destinations as possible, to connect to Europe from Brazzaville, or to go even beyond the Middle East, thanks to our direct flight to Dubai.”

ECAir plans to add around 10 new destinations by the end of 2015, including Beirut (Lebanon) and Abidjan (Côte d’Ivoire).

A key factor in ECAir’s growth, according to the airline director, has been cooperation, particularly on an international level. “We already work with certain American suppliers, such as Boeing,” she says, while another factor that will ensure stable expansion is the continued liberalization of the African skies. While countries that belong to AFRAA have free airspace, many others do not, a situation that the association is lobbying to change. Consequently, projects such as the Intra-Africa Cooperation that was put forward in the 1990’s continues to be a point of discussion.

Mrs. Beyina-Moussa also points out that AFRAA, the African Union, and governments from the likes of Ethiopia and Kenya have all pushed to modernize their airports and airlines to international standards. ECAir is also working to ensure compliance with safety regulations by having multiple maintenance workshops located throughout Europe. Modernization for ECAir means new equipment primarily from the U.S. and ordering new aircraft through PrivatAir. Upgrades have also been an important step in increasing the Republic of the Congo’s links with the rest of the world and cementing ECAir’s place as a safe and reliable carrier.

“This is the first time in our country’s history that we have been able to attract AFRAA since the association began 47 years ago,” Mrs. Beyina-Moussa adds.

With Brazzaville hosting the 47th AFRAA assembly in November 2015, the Republic of the Congo’s attendance suggests that real progress in the area of civil aviation is being made and there seems little reason to doubt that the country’s aviation sector will continue to blossom.