From vision to reality

Article - February 20, 2014
The Pakistani Minister of Planning and Development discusses the Vision 2025 plan, solving the energy crisis, the country as one of the world’s most attractive investment destinations and the tackling of the law and order situation, often over exaggerated in the global media 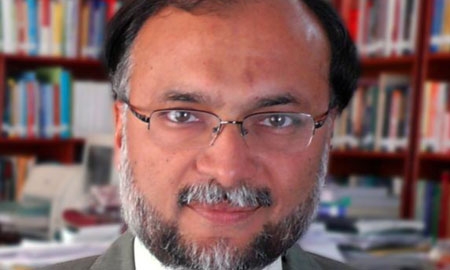 In his application for a place on an MBA programme at Wharton School of the University of Pennsylvania, Ahsan Iqbal, the current Pakistani Minister of Planning and Development, was asked where he saw himself in ten years. He recalls writing that he saw himself serving his country through public affairs.
Following his graduation from Wharton, he attended Georgetown University and Harvard. Then he was faced with a choice: “I could live in the United States like many of my classmates and make a fortune for myself or I could go back to my country and try to make a difference.”
He decided to take the more difficult choice and return to his homeland, and like many of the ministers and deputies in the administration of the current PML-N government led by Prime Minister Nawaz Sharif, it appears that he truly wants to make a difference.
“’The PML-N government has a focus on rebuilding the economy and attracting investments to jump start growth. Economic reforms for economic stabilization have been initiated and a five-year plan and Vision 2025 have been launched to transform Pakistan into an upper-middle income country by 2025,” says the minister.
Mr Iqbal was also part of the 1998 administration of the PML-N, which also had big plans and ambitions. So what is different from the plans of 15 years ago? He responds: “I think that one major change is that this time we have a very strong focus on delivery – on monitoring and performance delivery.
“We are setting up a delivery unit as part of our planning and this will monitor progress of every ministry, which will form part of the plan and report to the prime minister. Every six months, the prime minister will review the performance of every ministry in terms of meeting targets and that I think is very effective.”
The current administrations plans are focused on industrialisation, improving agriculture, developing infrastructure, and increasing exports. It also focuses on the creation of a thriving SME sector, in the hopes to tackle youth unemployment. “An upgrading of human resources with more focus on health, on education is high on the Government's agenda. Pakistan has a 60 percent young population out of the total 190 million people,” adds Minister Iqbal.
However, for all these dreams to be realized, first the energy crisis must be tackled – a crisis which is the result of the fact that there has been no major energy project undertaken in 14 years. Significant shortages of energy due to lack of supply are impeding Pakistan’s industrial output, shutting down factories for hours at a time and, hence, impeding economic growth.
“The top priority for government is energy security with the aim to increase the efficiency of the existing power plants and set up new power plants based on coal, hydro and nuclear technology,” he explains. Coal in particular is one mineral that Pakistan has in abundance and so far it has not been adequately exploited.
To undertake major energy projects, Pakistan needs private investment and is looking to foreign investors. In order to attract them, much effort has been put into improving the investment climate and creating incentives for foreign investors.
What may be surprising to some is that – according to the minister – a leading multinational has named Pakistan as one of the top 10 most attractive places for investment globally. In a country whose image in the world media has been severely tarnished by the stories focused on war, instability, terrorism and religious fanaticism, how can this be so?
"The law and order situation in Pakistan is improving and the county is certainly conducive for investment,” says Mr Iqbal. “The law and order situation is not spread all over Pakistan. It is confined to certain areas. So anybody who is doing business here, or who is living here or who is visiting Pakistan, has no greater threat to their life than they have in being in a fatal accident on the road in our country.
“The dangers over here are over exaggerated so these negative perceptions are incorrect. Investors should look beyond the media perceptions. The reality is different.”
Moreover, he says that: “Pakistan has a very liberal investment policy. Growth will come through the private sector. Growth will come through foreign direct investment and therefore that is the area we are focusing on and we are working directly with the private sector. We are trying to remove all the hurdles which are there to stop them. We encourage all investors to come here.” Apart from the energy sector, the minister says that there are investment opportunities for British investors in IT, manufacturing and mining. “Minerals in northern areas, we have huge deposits of minerals where we need investment.”
While the problem may be exaggerated by the global media, there is no doubt that Pakistan has problems with extremism, fanaticism which is causing the law and order issues. Prime Minsiter David Cameron has signalled that there is a clear link between these issues and poverty and has stated that they can be rooted out through socio-economic development.
Ahsan Iqbal tends to agree: “If your economy is right you have taken care of illiteracy. If your economy is right you provide better healthcare. If your economy is right, you will provide a better justice system. If your economy is right you are able to address your extremism issues because people are not unemployed, desperate, out of school and not looking for some revolutionary ideas they all want to work.
“They want to have a decent life. They will look for opportunities – economic opportunities. So therefore the mother of all problems is when you have a weak economy and solution of the entire problem is to have a strong economy. We have a very strong focus on economy.”