With 80 million hectares of fertile and arable land and only 10% of the soil being worked, the agricultural investment plan aims to ensure food security and promote social integration with the creation of a million jobs in rural areas 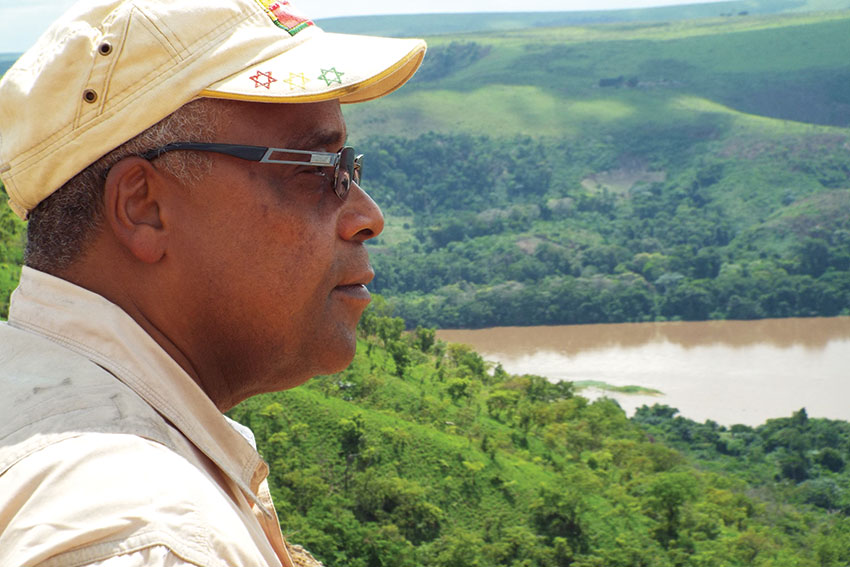 The DRC is known for having huge agricultural potential, therefore a new strategy to modernise and capitalise on the sector’s opportunities is set to create one million new jobs and deliver greater food security than ever before.

With 80 million hectares of fertile and arable land, the country by no means lacks extension, yet only around 10 per cent of the soil is currently being used for production. The result is food insecurity and reliance on food imports, which contrasts with the country’s potential to satisfy domestic demand and export.

As part of the government’s strategy to impulse agroindustry and rural development, and cut food dependence on foreign countries, measures are being taken to drive investment and growth in the agricultural sector, building on its already established position in the country’s economy.

“Agriculture is the second economic pillar in addition to the mining sector,” explains Emile Christophe Mota, Minister of Agriculture, Fisheries and Livestock. “The DRC has roughly 75 million mouths to feed. In order to achieve this, important strategies must be put in place.”

The overlaps that exist between the agricultural and associated industries mean investment can have far reaching consequences. “Agriculture is a cross-cutting sector,” adds Mr Mota. “It needs the financial sector to fund its activities, the transport sector for logistics, security and insurance, rural development as well as education and training, because we must train personnel to boost the sector.”

Major crops range from palm oil, rubber, coffee and cocoa in the northwest of the country to a diverse selection of vegetable products in the eastern province, and both mechanised and manual agricultural practices are used to harvest them. “In the central and southern part of the country there are mainly food crops such as rice, maize and beans and in the southwest we have vegetables and cassava,” adds Mr Mota.

With such an array of products and possibilities, the government aims to strengthen agriculture’s role as a driver of development and social inclusion, providing both self-sufficiency and food autonomy for the country but also ensuring new employment and export opportunities. The key however is investment – partly to increase output and to improve the delivery of products, but also to establish agro-industrial parks which will add value to the products harvested, serving as a vital catalyst for wider economic diversification and growth. “Of the 77 million people in our country, three quarters live in farming households, with areas ranging from 10 to 50 acres,” adds Mr Mota. “Of our 80 million hectares of agricultural potential, roughly only two million are used by small farmers. And we have great agro-pastoral industries in the south, mainly in Katanga, with roughly 25,000 mechanised hectares. In the northwest part of the country we have the Bukanga-Lonzo project which consists of 80,000 hectares, of which only 5,000 are currently being exploited.”

Such figures provide a clear insight into the current shortfall within the agricultural sector in the DRC, but a series of reforms and new policies – such as the National Agro Development Fund, the National Agricultural Investment Plan and the agro industrial parks – are being introduced to encourage expansion and modernisation of the sector, something that has been highlighted by Prime Minister Augustin Matata. “The agriculture sector is a key driver of growth which offers enormous opportunities,” he says, adding that the country’s agro industrial parks programme has been developed in partnership with the private sector.

Yet achieving self-sufficiency – and indeed producing enough foodstuffs for exports – remains a challenging business for local farmers. Limited infrastructure in many rural areas can cause logistical nuisances for those trying to get machinery and equipment to the fields, and their products to the consumption centres. Meanwhile with so many small-scale farmers, mechanisation has remained at relatively low levels causing an impact on efficiency levels, which have not risen in line with some of its continental competitors. Access to finance also constitutes a challenge. With poor access to bank loans there is little chance for businesses to expand and grow. But once operational, the National Agro Development Fund will serve as a guarantee for farmers and operators in the agriculture sector, enabling them to access credit in order to buy seeds and invest in new machinery which will improve efficiency and output.

The prospects of farmers are also improving thanks to a series of development targets introduced by the government and the National Agricultural Investment Plan, which attempts to enhance the contribution of the sector to the national economy and social inclusion. Agri-investment schemes are being introduced to reduce poverty and insecurity in rural areas, and widespread campaigns designed to improve awareness of the agricultural sector can be seen across the country.

Agro industrial parks are examples of the investment opportunities in agribusiness, which are in the form of public-private partnerships

The plan was first launched in 2013 and is set to run until 2020, with a specific focus on increasing and diversifying agricultural production, with the aim of supplying new agro-industrial products that respond to domestic and international demand. The strategy’s overall objective is to stimulate sustainable growth in the agricultural sector of over 6 per cent a year and to ensure food and nutrition security, while also generating sustainable jobs and income for those working in the sector and beyond.

And diversification is an increasingly important aspect of the 2020 plan, something that Mr Mota says exemplifies the cross sector influence of the agricultural industry and its impact across the local economy.

“From the land to your plate resumes our agriculture policy. Starting from the grains up until the product is grown and processed. From corn grain to flour. We then enter the third phase which relates to the service sector, such as restaurants, marketing, etc.

“There is a clear crossover between many sectors. In agriculture, the whole process, from harvest to processing is done inside the country, which is important because of the added-value aspect.”

Such aspects of the Investment Plan are helping drive the industry forward. The plan is organised into five programs, namely the promotion of agricultural value chains; managing food and nutrition security and reserves; governance and building institutional capacity; research, development and agricultural education regarding all aspects of the agricultural industry and adaptation to climate change. But perhaps the cornerstone of the plan is the progressive development of more than 25 agro-industrial parks over tens of thousands of hectares throughout the country. The pilot park is located at Bukanga Lonzo in the Bandundu Province and was inaugurated by President Joseph Kabila in mid- 2014, proving vital to the sector’s wider prosperity.

The park totals 80,000 hectares with access to good soil and water, along with proximity to Kinshasa that provides a steady market with a trade opportunity of over 12 million consumers. The park is a great example of the government’s strategy to introduce mechanisation into the fields and add efficiency and value.

“Human strength alone does not give us the results we need,” says Mr Mota. As such the government has been pushing farmers to mechanise their operations, with more than 3,000 tractors being provided for use, while the agri-business parks are enabling new techniques to be taught to those in the industry.

“Our agro-industrial parks are integrated and inclusive,” adds the minister. “The parks not only aim to produce certain foodstuffs but also to support small farmers and stock their products or buy them. We have periods of high production when prices fall and to ensure a permanent and regular income to the small farmer, we store their products, which can then be sold when prices are back to normal. Giving small farmers a permanent and growing income allows them to further boost their activities.”

The parks also provide local farmers with a way to create added-value products, with processing facilities available. Corn can be converted into corn meal, which is then sent onto several points of sale so that large and smaller traders can be powered by this huge initiative.

The plan is to now extend the agribusiness park project on a nationwide model, with the aim to have 26 agro-industrial parks operating across the country’s 26 provinces. There are currently four parks scheduled for rapid deployment, with one set to be installed in the central region of the country and a second installed in the province of Katanga. A third will be launched in Maniema and a fourth in the northern province of Ubangi in Gbadolite.

To power this expansion, numerous investment opportunities have emerged, with public-private partnerships being developed to create the parks and ensure logistical links are in place for products to make it to market. Tax incentives are also in place to attract international investors, as well as the National Investment Promotion Agency, which Mr Mota describes as a “gateway” for investors.

“The agricultural sector is growing. We have invested in the parks programme and agro-industrial partnership with the private sector”

“To those who are looking to come to the DRC, I would like to say that we have the space,” he says. “We are working on implementing a progressive agricultural zoning system, we have areas exclusively reserved for agriculture. The potential is there.”

This combination of circumstances is allowing the country to make a serious impact on what were once dismal foreign trade figures. The country has made a remarkable recovery since the early 2000’s and over the past decade its exports, mainly from the mining sector, have grown 47 per cent per year on average, reaching $12 billion (£8.3 billion) in 2014.

Indeed the African nation now finds itself poised to ramp up its agricultural production with agribusiness parks delivering far greater efficiency and better returns for farmers. With a nationwide rollout expected to follow, there seems little reason for the Democratic Republic’s momentum to stall, as logistical improvements and government support help bolster the sector and its associated industries. Mechanisation is also delivering results on the efficiency front and associated industries should be set to enjoy the windfall of a booming sector. Meanwhile public-private partnerships and tax incentives are allowing investors to not just support the country’s agricultural sector, but also reap some of the benefits of the harvest as well.