In line with its National Development Plan for 2013-2017, Angola has committed to revitalizing agriculture by way of extensive land cultivation projects, thus increasing its food supply and creating jobs. 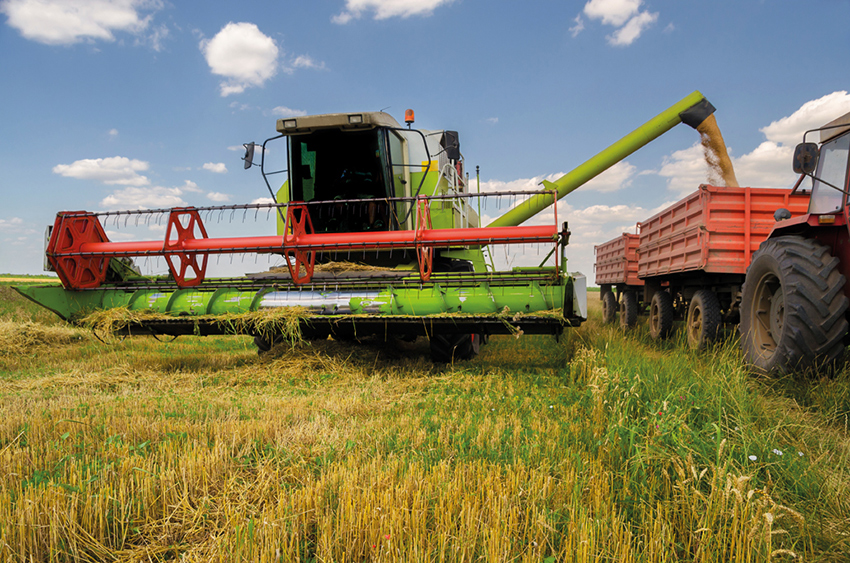 THE CLIMATIC DIVERSITY OF ANGOLA’S AGRO-ECOLOGICAL REGIONS ALLOWS FOR THE CULTIVATION OF TEMPERATE AND TROPICAL CROPS, INCLUDING COFFEE, BANANAS, CASSAVA, SUGAR, AND CORN
SHARE

In its bid to diversify the economy, Angola has placed agriculture at the forefront of the new economic framework.

Agriculture will be one of the leading sectors of economic growth for the country in the years to come.

Specifically, agriculture is expected to grow by 12.3% in 2015, and it is anticipated that during the next few years, it will be among the sectors contributing most to the growth of the Angolan GDP.

As Minister of Agriculture Afonso Pedro Canga pointed out, "In recent years, agriculture has come to be increasingly more important nationally, comprising about 42% of the real economic growth rate."

The government has certainly put forth every effort to stimulate the development of agriculture, but has been securing private investments to serve as the launchpad needed for its final liftoff.

This sector has been recording extremely positive figures, to which family farming has in large measure contributed. Such operations are the main source of income for 2.5 million families, and account for more than 80% of basic food production, notable crops including grains, roots, and legumes.

These numbers remind us that the climatic diversity of Angola's agro-ecological regions allows for cultivation of temperate and tropical crops, some noteworthy examples being coffee, bananas, cassava, sugar, and corn.

Owing to the sector's need to continue growing, thereby contributing to a full diversification of the Angolan economy, the current objective is a transition from family farming to large-scale agriculture.

It is at this point that international partners and private investments play a key role. As Canga asserts, "International cooperation facilitates the transfer of much needed technology, experience, and dialogue, in addition to technical assistance."

Angola calls on foreign companies to keep an eye on the sector and explore the potential for deals with local companies.

The government's priority in this matter is to reduce imports and to attain self-sufficiency in basic foodstuffs, to the point of amassing a surplus.

"Topmost on our agenda is the development of a competitive agriculture based on a redirection of family farming towards the market and a relaunch of the business sector," relates Minister Canga.

Angola wants to foster local production, increase productivity in the sector, and reduce its dependence on food importation, which drives up product prices and has placed Luanda among the world's most expensive cities to live in.

Kundi Paihama, Governor of the province of Huambo, one of the country's most important agricultural regions, has urged its citizens to dedicate themselves more to agriculture, with the goal of increasing and diversifying production in order to ensure the livelihood of families.

For Kundi Paihama, it is essential that all citizens, regardless of their social or economic position, develop awareness of the importance of this sector for the survival and self-sufficiency of families.

For its part, Cuando Cubango's provincial government has pointed out that policies incentivizing family farming should take into consideration the diverse needs of small producers.

This regional executive order aims to enable rural workers to increase production, and grants them rights to use and enjoy land, as well as water resources, market access, and credit.

Technology will underpin all future development in the sector, above all the government's efforts to reinstate and expand infrastructure supporting all agricultural production.

The aim is to increase the quantity and quality of products, and the order's message is quite clear: "promote integrated and sustainable development of the agricultural sector, take full advantage of the potential of productive natural resources, as well as the sector's competitiveness, seeking to ensure food sufficiency and the domestic supply; and to thus utilize opportunities related to regional and international markets," explains Minister Canga, adding that the important thing is "to bolster the agricultural research system as a tool for technical, technological and scientific development."

"It's well known that the practice of agriculture requires not only technology, modernity, and scientific knowledge, but also the initiative to seek out further tools for agricultural guidance and aid," says Kundi Paihama.

One of the initiatives carried out in recent months, targeted at helping farmers grasp the importance of technology in this sector, demonstrated and explained to them, by way of example, the installation of new irrigation systems, a practice which enhances agricultural competitiveness and mitigates the effects of climate change.

Kundi Paihama has realized the necessity of investment in the mechanization of agriculture and irrigation systems to increase their land's productivity.

The city of Kuito Kuanavale, in the Cuando Cubango province, is home to one of the largest agricultural development projects in Angola.

It is an agribusiness farm with 100 Angolan workers and 60 expatriates, and it foresees the addition of 300 direct and 1,000 indirect job openings.

The factory is developing an extensive project for farming rice, as part of the strategy of Angola's executive order to combat hunger and poverty and to gradually reduce importation of agricultural products.

The enclave is equipped with the sector's latest technology.

For its part, the city of Cuimba in the province of Zaire adopted a project late last year which forecasts an annual production of 15,000 tons of corn and 5,000 tons of soy within an area of 3,000 hectares.

The plan includes the construction of three silos, with a total storage capacity of 15,000 tons of grain and cereal, capable of yielding 150 tons  of food crops per day.

The project will create 300 direct jobs and is to be carried out over a period of 60 months, during which aviaries shall be built for 250,000 birds, with the goal of producing 5 million eggs per year.

"Supply is still limited. Everything we produce is consumed. It's estimated that there are currently over two million families working in the fields; whereas, in corporate agriculture, the results thus far have been difficult to measure."

Carlos Alberto Jaime Pinto, Chairman of Gesterra's Board of Directors

In line with the National Development Plan Strategy, the revival of agriculture is spurring job creation and economic progress in Angola's rural communities.

Two companies are at the forefront in the agricultural development race: Gesterra and GIASOP.

Increased production, grounded in product quality, is what these companies are pursuing. "We are the country in southern Africa with the best conditions for production, not only for the domestic market, but also for exporting to the market of the Southern African Community, and its population of more than 200 million. We possess the necessary logistical conditions for these types of businesses and for distribution of their products," says Chairman of Gesterra's Board of Directors Carlos Alberto Jaime Pinto.

This company's responsibility is to produce on a large scale, using the available technological advances at the agricultural level in order to achieve reliability and food self-sufficiency.

"Gesterra has all the conditions it needs to fulfill its role, but we are always open to streamlining our processes through partnerships with foreign countries which can contribute to management, technology transfer, finance, and production," says Pinto.

The Angolan Ministry of Agriculture's goal is to produce 2 million tons of grain per year. The Chairman of Gesterra's Board of Directors admits that it has yet to reach 80,000 tons annually, and adds that achieving this goal "depends on many factors."

Carlos Alberto Jaime Pinto explains that medium and large scale intensive agriculture is what it's going to take to achieve surpluses and establish commercial agriculture.

"And that's where we'll be able to create food reserves. With the projects that Gesterra is implementing, I believe that within the next eight to ten years it will be possible to achieve that goal; provided the necessary financial incentives are in place," he declares.

Chairman of GIASOP's Board of Directors Tambwe Mukaz prefers to look to the future, and takes a very positive view of the policies undertaken in recent years by the country's president, José Eduardo dos Santos.

"In discussing Angola's agricultural sector, one speaks of nearly our entire history. The more than 30 years of civil war prevented land use, due to the minefields, cracked highways, and many other risks that prevented development of the sector. Thanks to the country's president, there is now a commitment to reparation of infrastructure and connections between the fields and the city, of great benefit to the people," observes Mukaz.

The recent period has seen increases in optimization of production output, thanks to advances in research carried out in the agricultural sector.

The Ministry of Agriculture has several research institutes, such as the Institute of Agronomic Research and the Veterinary Research Institute, which are capable of reinforcing and following up on the programs the government has proposed. In fact, they are being restructured to offer positive solutions to the sector's current needs.

"In my opinion, research should be applied and adapted to the realities of each country. One should seek out the best in each territory, and figure out ways of implementing results in Angola; we must seek after real research that can be adapted to the conditions in Angola," remarks Gesterra's director, stressing the value of efforts put forth in this sector:

"Great efforts are needed in order to create the infrastructural conditions which permit field technicians and scientists to be directly linked to production. The only way we can buy time is by applying research to our conditions and realities."

Social integration in Angola is another objective being pursued, with diversification of the economy through agriculture. "Integration of the population has been a prerequisite in all of the food production projects we've carried out. We must bring the population together through fundamentally productive programs," stresses Gesterra's Chairman of the Board.

"In each project, we construct a health center, a school, and basic infrastructure for integrating the population," adds Carlos Alberto Jaime Pinto, who maintains that his company "fuses social integration with the betterment of these communities' living conditions, alongside economic improvement which optimizes wages and job offerings for the youth. And many of these young people are working in industry, processing corn, cassava, etc".

To summarize, the goal which both the government and agribusiness seek to achieve is none other than product quality. Domestic companies have scoured the globe to bring the best to Angola.

The company GIASOP has made substantial investments to move up in the value chain with high quality products, and to that end is seeking foreign investors interested in investing in Angolan agribusiness.

As the company's Chairman of the Board explains, "We are investing in North American dairy cows - the Holstein and the Jersey, which are among the best breeds in the world - genetically apt to yield a high-quality product. In Tambwe Mukaz's opinion, and in light of the challenges and difficulties, "aid and subsidies are needed for acquisition of agricultural machinery, as well as tax cuts and long-term funding for encumbered programs which require constant updates".

The numbers favor the development of agriculture in Angola but, as local entrepreneurs explain, foreign investment and agreements with international companies are essential to maintain growth rates in this sector, which are vital to the progress and diversification of the Angolan economy.