An agricultural shot of health for the economy

Article - October 14, 2011
Agriculture is the third-largest economic sector and provides jobs for 56 per cent of the workforce 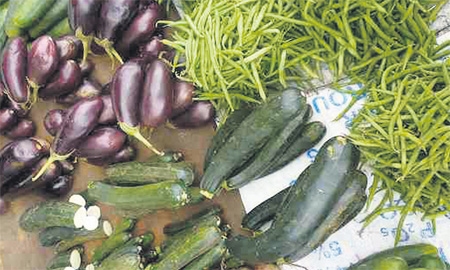 Walk into a market in Central Africa and many of the fruits and vegetables on display are likely to come from Cameroon. At supermarket chains in neighbouring Gabon, slick packets of Robusta coffee from Douala-based SMEs stock the aisles. Cocoa is another home-grown commodity that brings in important export revenues to this agriculturally rich country.

Located on the equator, Cameroon has ideal growing conditions for cash crops like coffee and cocoa, as well as bananas, palm oil, rice, sugar and natural rubber, although only 20 per cent of available arable land is farmed. In South Province, a cocoa-growing area, temperatures rarely exceed 24ºC and rainfall averages 1,800 millimetres per year. Political stability has allowed agro-processing industries to grow and play on sub-regional wage differentials.

Coffee was first introduced to Cameroon in 1938 by way of the northwestern department of Boyo and today the area is known for its high-quality beans. In recent decades, however, output has fallen from an average of 11,000 tonnes in the 1980s to less than 1,000 tonnes, due in part to coffee berry disease and obsolete machinery. Only small areas are under cultivation, leading to low productivity. Cameroon otherwise exported a total of 44,966 tonnes of Robusta beans and 3,198 tonnes of Arabica beans in 2009-2010.

By 2009, agriculture accounted for 18.9 per cent of Cameroon’s GDP, making it the third-largest economic sector after services and manufacturing. It is still the country’s largest employer, providing jobs for 56 per cent of the workforce. And yet, Cameroon imported CFA 500 billion (£664.8 million) worth of grains and fish last year, widening its current account deficit.

Like other economies in sub-Saharan Africa, an over-reliance on export receipts from hydrocarbons and mining has neglected sectors that can provide real dollar income for the country’s poor. Because of the need to diversify the tax base, investing in smallholder agriculture and agro-processing has suddenly made it back to the top of President Biya’s agenda. Furthermore, farm inputs and seed banks are helping to give agribusiness a shot of health.
At the 2010 Ebolowa Agro-pastoral fair in southern Cameroon, President Biya made public a series of measures to bolster food and tree crops. They included the opening of a tractor factory in Ebolowa, as well as investments in animal feed plants and large-scale farming projects. The President also vowed to push for land reform and create a credit institution for young farmers. Meanwhile, the Ministry of Finance is considering the lifting of import taxes on fertiliser products.

“The landmark changes that need to be instituted have already been announced by President Biya within the framework of the national strategy for growth and employment. Revitalising the agricultural sector is once again one of the top national priorities. As a result, the Ministry of Agriculture and Rural Development will be able to inject the necessary resources to promote agricultural production,” says Mr Nkuete.

Small farms have been able to catch up with technology and the emphasis on quality is paying off, with growing demand for Cameroon’s export commodities in sub-regional and international markets.

“By 2016, Cameroon’s agricultural sector will have come a long way. The new stress on seed quality and mechanisation is going to guarantee food security, but also improve living standards in the countryside and lay the foundations for industrial expansion. Basically, it will help make our country an emerging market by 2035,” says Mr Nkuete.

NGWA NIXSON FUH
100% of 1
Sir we have a farming group here in Bamenda nw province and wish to inprove on cocoa planting technics . sir can yougive us a helping hand? email fuh.nixson@yahoo.com