Almost six years after the end of the Second Ivorian Civil War, Côte d’Ivoire has witnessed a successful and peaceful transition to economic growth, bucking regional trends with 8.5% GDP expansion in 2016 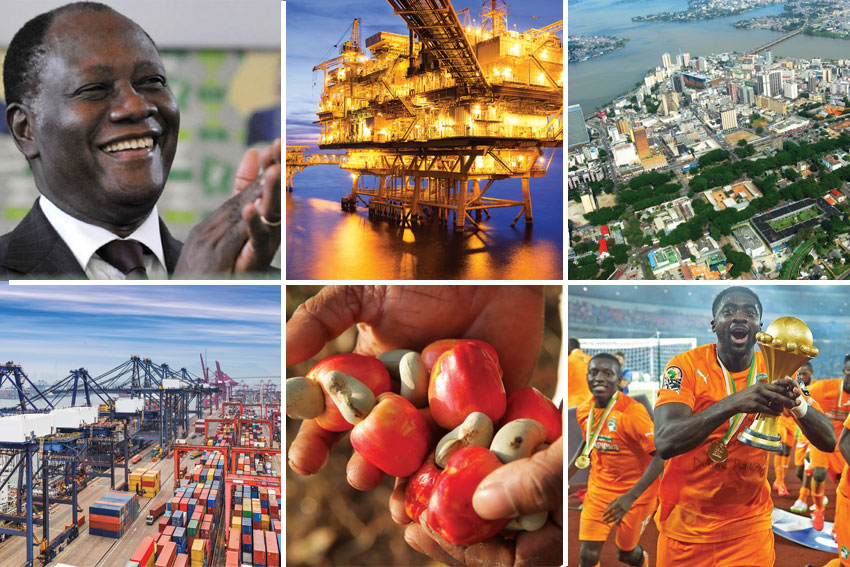 Côte d’Ivoire can comfortably be described as booming. Its near-unstoppable economic growth – 8.5% in 2016 – places it as one of West Africa’s largest economies. And this achievement is all the more notable given that it comes following over a decade of stagnation and conflict.

Two successive civil wars marred the start of the 2000s, and divided the country into a rebel-held Muslim north and a government-held Christian south. The economic destruction the conflict brought with it is best illustrated by the fact that it even drove out the African Development Bank (AfDB) in 2004 from its headquarters in the economic capital Abidjan, where it had operated since the 1960s. The Second Ivorian Civil War came to an end in 2011, and under the watchful eye of the post-war President Alassane Ouattara, the country began to flourish once more. The return to Abidjan in 2014 of the premier African financial institution was a “symbol of the renaissance of the Ivorian economy after a decade of recession and a symbol of the reconstruction of Ivorian society,” according to AfDB head, Donald Kaberuka, but it was the 2015 landslide re-election of President Ouattara which truly cemented the West African country’s bid to put the past behind it and revive its war-scarred economy.

“Indeed, the 2015 elections were a major challenge for Côte d’Ivoire,” says Hamed Bakayoko, Minister of the Interior and Security. “The country had to show that it has turned the page of the crisis, that it has turned the page of violent elections and that it is projecting itself towards a more peaceful and brighter future. What do we intend to do to maintain this climate? Maintain dialogue…There is collaboration and exchange on all issues with the opposition. There is no dogmatic or fixed position. There is really the idea of creating a calm environment so that the country can develop.”

With the peaceful vote seen as a big step in consolidating peace and economic confidence in the country, Côte d’Ivoire has proven itself capable of an astounding political transformation. Today, the country, the world’s largest cocoa producer, is a rare African bright spot, and while poverty rates remain high despite surging export rates, President Ouattara has pledged to create more inclusive growth by smoothing the way to greater investment. Tax breaks, customs duties cuts and even compensation in the event of social unrest have increased investor confidence, while a focus on infrastructure development – with power distribution and transportation at the forefront – lay the groundwork for the government’s stated aim to transform the West Africa nation into an emerging country by 2020. Early indicators are promising – according to IMF data, Côte d’Ivoire was the fastest growing economy of the African continent and the third-fastest in the world in 2016, and the AfDB projects GDP growth of 8.3% for 2017.

“We have started a new mandate that must mark a new departure in the direction of state affairs,” President Ouattara, a former IMF official himself, said to gathered media following his re-election. “The establishment of a new government will have better coherence as a goal so the government can be more efficient.”

Confidence is growing among the business community around Côte d’Ivoire’s prospects. The country knocked Nigeria from the top spot of Nielsen’s Africa Prospects indicator (APi) overall results in Q2 of 2016, and has since held on to its top ranking, making it a more stable African investment destination than the larger economies of South Africa and Angola. Nielsen analysts pointed to its favorable economic growth, stable inflation climate and recent elections as providing a fertile investment environment.

What’s more, for international investors, opportunities also abound to develop partnerships with increasingly strong homegrown entrepreneurs. At the 2016 edition of the Africa CEO Forum, held in Abidjan in March, and marking the first time that the event has taken place on the African continent, Sébastien Kadio-Morokro, Chief Executive of local oil firm Petro Ivoire, was named Africa’s Young CEO of the Year, recognizing the potential both of Ivorian firms and their leaders. As participants from the Ivorian private sector discussed their role as a catalyst for growth and value creation in the country, President Ouattara highlighted that “the time has come for us to industrialize, which will see more jobs being created, and to accelerate the growth of the agro-industrial, textile and mining sectors.”

The Ivorian Government is keen to deepen economic cooperation with the United States, which accounted for $134 million of foreign direct investment in the country in 2014, a 14% increase from 2013. And while the most fruitful areas of investment for U.S. businesses are in oil and gas exploration and production, agricultural commodities and the mining industry, the country’s expanding middle class also presents an opportunity for American retailers. When a new shopping mall, West Africa’s biggest, opened to much fanfare in Abidjan in January last year, among the shopping center’s tenants was American fast-food giant Burger King, which selected the country as the location for its first restaurant in the region.

Today, political progress keeps on coming. In May last year, President Ouattara set up a committee of experts to propose a new constitution. Its key aims, which included setting up the position of a vice-president, establishing a senate, and incorporating traditional leaders, was seen by many as a solid move toward the consolidation of constitutional principles. While the November 2016 vote was not without incident – opposition party members boycotted the polls – over 93% of voters elected in favor of the new charter, which the president said would “help end years of instability”.

With the peace and stability that are pre-requisites for economic growth now firmly in place, the government can get to work on returning the country to its former status as West Africa’s regional economic and financial powerhouse, by spurring on the private sector with heavy investments in long-neglected infrastructure.