Africa's Electricity: Needs are being met with innovative new projects

A satellite image of the world at night shows a brightly lit Europe covered with starry dots and in sharp contrast, a dark, unlit Africa. 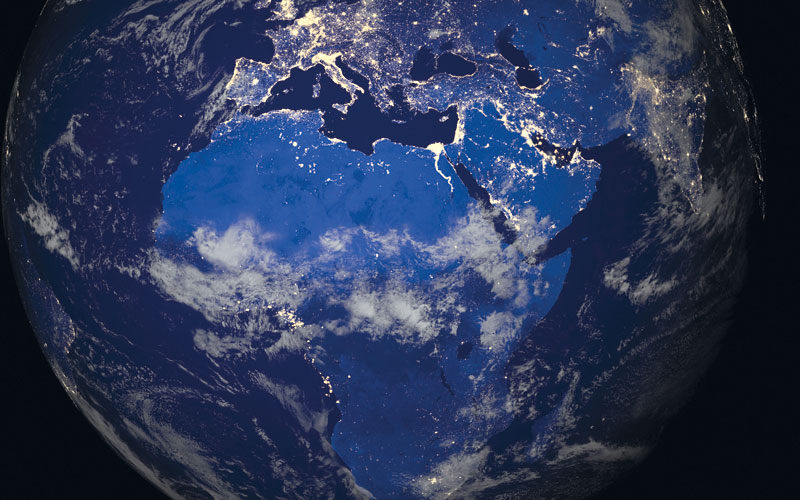 AFRICA´S ENTIRE INSTALLED CAPACITY FOR ELECTRICITY GENERATION OF 147 GW (GIGAWATTS) IS EQUIVALENT TO THAT OF BELGIUM AND TO WHAT CHINA INSTALLS EVERY TWO YEARS.
SHARE

According to the U.S. government, there are 1.2 billion people on the planet who live without electricity and half of them are in sub-Saharan Africa. The total installed capacity in Africa is 147 GW, the equivalent of the total capacity installed in Belgium, according to the International Energy Agency. It is also roughly the equivalent of what China installs every two years.

Other comparisons show the gigantic gap between our richly lit “first” world and unlit Africa. For instance: one refrigerator in the U.S. consumes in one year six times more electricity than an average person in Tanzania.

Yet, the continent has enormous power potential: huge rivers, vast reserves of oil and gas, coal, as well as the resources for solar, wind and geothermal energy. But it lacks infrastructure for generation, transport and distribution or the capacity to finance projects.

Since the mid-1990s, external finance to Africa’s power sector has averaged only around $600m per year of public assistance, plus a similar volume of private finance, according to the World Bank.

Indeed, according to the International Energy Agency, sub-Saharan Africa needs more than $300bn in investment if it wants to achieve universal electricity access by 2030.

With Africa having already achieved an average growth rate of 5%, new projects are being developed which require new sources of financing, in particular from the private sector. Following is a brief presentation of some of the most exciting ones:

Already an exporter of electricity, oil and gas, Ghana is on course to develop the largest solar photovoltaic park in Africa. In this sense, it is leading the way among African countries looking to develop renewables as a viable solution to reduce their dependency on oil imports.

The 155 MW Nzema solar park, which will have about 630,000 photovoltaic panels, is scheduled to start operating by mid-2015. Plans for the $400m plant were first unveiled in December 2012 as part of Ghana’s initiative to expand its renewable energy industry, which is set to produce 10% of its energy needs by 2020.

A groundbreaking project is being carried out here to produce electricity by extracting the methane trapped deep in the water. The state-owned Kibuye Power plant already produces 3.6 MW but the government forecasts Lake Kivu could provide about a third of Rwanda’s electricity within two years.

Already, local and foreign investors are committing hundreds of millions of dollars to new methane plants along the lakeshore, both in Rwanda and DR Congo (the border between the two countries crosses the lake). According to a research by Bloomberg Energy Finance, Rwanda could generate 100% of its electricity through renewable sources by 2030.

Although it has considerable resources in natural gas –estimated at 41.7 trillion cubic feet– which it is beginning to exploit to produce much needed electricity, Tanzania, East Africa’s second largest economy, is also looking into renewable sources of power.

Construction work on the country’s first wind farm is to begin in the second semester of 2014 in Singida, in the western region.

Wind East Africa is a joint venture between British company Aldwych International and its Tanzanian partner Six Telecoms Company Ltd. It will supply 100 MW of reliable, low cost wind power to the national grid, which is roughly the equivalent of 7% of the current installed electricity generating capacity.

The new thermal power plant of Lomé, Togo, inaugurated in 2010, has been recognised as one of the top 40 public-private partnerships by the International Finance Corporation (World Bank group). The project was cofinanced by the US government’s development finance institution, Overseas Private Investment Corporation (OPIC).

OPIC provided $147m in loan and $62m in insurance to American independent producer Contour Global for the construction and operation of the 100MW, tri-fuel plant. It was the largest electricity investment ever made in Togo, a small country that has one of the lowest rates per capita of electricity generation in the world.

The plant has tripled Togo’s capacity and since it started operations, rolling blackouts have virtually ceased, according to OPIC.

In Uganda, the demand for electricity is growing at an annual rate of between 10-12%, according to the government. Apart from the promising reserves in oil and gas, which have already attracted considerable Chinese investment, Uganda has also a vast potential in hydropower. Several dams are in construction on the White Nile, which originates in Lake Victoria in the country’s south-central region.

China’s  Synohydro, has been contracted to build the 600 MW Karuma dam. With a price tag of $1.65 billion, partly financed by a $500 million Chinese loan, Karuma is Uganda’s biggest power project yet.