The ANC: bringing 100 years of hope to South Africa and the continent

Article - June 13, 2012
The African National Congress (ANC) celebrated on January 8 its 100th anniversary with festivities in Bloemfontein, South Africa, in which leaders from the party and representatives from across the continent, along with tens of thousands of South Africans, waved the green and gold colors of the party 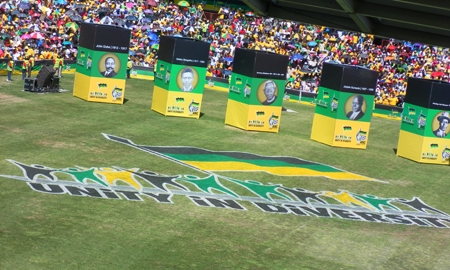 From its origins the ANC, Africa’s oldest liberation movement, has helped shape and form not only politics in South Africa, but also spearheaded the struggle against British and Boer repression in the continent. During its centenary birthday, in a letter to President Jacob Zuma, British Prime Minister David Cameron hailed the ANC as a “beacon for the world” in fighting discrimination and oppression, and added, “it is incredible to see the changes in South Africa that the ANC has helped to bring about.”

The party, home to Nobel Peace Prize winners Nelson Mandela – imprisoned during apartheid for 27 years – and Archbishop Desmond Tutu, celebrated with the world their 21st century theme, ‘Unity amongst diversity’. This slogan, clearly demonstrated throughout the Rugby and Football World Cups, is a tribute to modern-day South Africa, or the rainbow nation as many scholars have dubbed the country.

In only 22 years since Nelson Mandela’s infamous walk to freedom in 1990 – year in which the icon of hope walked out of Victor Verster prison on a boiling Sunday afternoon – South Africa, hand in hand with the ANC, has built a united, democratic, non-racial, non-sexist and prosperous nation, which serves as a role model to demoralized and exploited masses.

Not only on a social stage has this young democratic nation developed, but also since 1994 South Africa has made bold macroeconomic reforms, which have boosted its competitiveness, economy, jobs creation and ultimately have opened up the present-day African giant to world markets.

Alongside, South Africa has abundant natural resources, exponentially growing financial, legal, communications, energy and transport sectors, a stock exchange ranked amongst the top 20 in the world, and a modern infrastructure capable of supporting trade throughout the southern African region, clearly making it a one-stop shop for international business.

Furthermore, in 2010, South Africa was included in the BRIC club, which represents 42% of the world’s population and 18% of its GDP, putting it in the league of the world’s fastest growing countries and an insider in the potentially most influential group. Beating in the competition contenders like Indonesia, Turkey and South Korea, South Africa offers China and the industrialized world access to a pool of 1 billion people and a unique potential in acting as a bridge between global divisions.

Clearly since 1912, year in which the ANC founding member Pixley ka Isaka Seme called on Africans to forget their differences of the past and unite together, this beautiful nation has grown into a leader in global and regional trade, economics and opportunity.

Happy Birthday ANC, may the next 100 years bring South Africa peace, happiness and positive growth for your nation and those around it. Viva South Africa Viva.