Article - August 5, 2013
The Nigeria Customs Service is stepping up efforts to control smuggling and enforce payments, whilst creating a better work environment for its employees 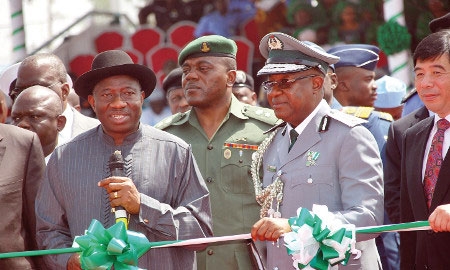 THIS YEAR IN MAY ALONE, THE NIGERIAN CUSTOMS SERVICE SEIZED £627,500-WORTH OF CONTRABAND
SHARE

Thanks in large part to its petroleum exports, Nigeria enjoys a trade surplus of some $27 billion. Its other major exports are cocoa and rubber, while major imports include machinery, chemicals, transport equipment, manufactured goods, food and live animals. Keeping check on the comings and goings of products is the Nigeria Customs Service (NCS), an institution dating back to 1891 when the British colonial administration set up the entity for the collection of inland revenue in the Niger Coast Protectorate.
Today, the NCS is a full-fledged 21st century institution that utilises the most modern computing systems, including ASYCUDA++ (Automated System for Customs Data, the original of which was created by the UN Conference on Trade and Development in 1981 at the request of ECOWAS). Its central server system, in use since early 2011, enables the agency to warehouse all import, export, excise, transit and transhipment data, and provides interconnectivity with terminal operators, the Ministry of Finance, the Central Bank (CNB), the National Bureau of Statistics and the Federal Inland Revenue Service, among others. Moreover, all designated banks, declarants and cargo carriers can also tap into the central server.
Other technological conveniences include e-payments through designated banks, e-submission of various forms to customs, e-remittance online in real time from duty collecting banks to the CBN, and SMS information to the National Agency for Food and Drug Administration and Control (NAFDAC) for regulated cargoes for necessary certification. These improvements have produced the desired results – a noticeable increase in revenue collection, a reduction in clearance times, lower transaction costs, and of course, better utilisation of human resources – and Nigeria has the Comptroller General of the NCS to thank. Upon entering the NCS as CG in 2009, Abdullahi Dikko Inde sat with his management team to articulate a road map with the aim of reforming customs procedures to improve efficiency and compliance – smuggling was, and remains, one of the main challenges the agency faces.
Among the first things they did was to build capacity (between 2009 and 2011, more than 12,500 employees underwent training both locally and internationally), change the mindset of workers by instilling in them a greater appreciation for transparency and integrity, and provide improved welfare packages for workers.
For Mr Dikko, the issue of problematic human resources is simple: “The right people should be in the right place and the wrong people should be out of the system. So, we either change it or we remove the bad ones.” Another important step was to launch a general awareness campaign, as many people involved in smuggling do it out of ignorance, says Mr Dikko. “One way to fight smuggling is to hold a big stick and talk with a soft voice. You have people who are ignorant of the procedures; they do not know and they are illiterate. They are pushed into smuggling by someone else who will benefit more,” he adds.
The NCS has published a long list of prohibited import items, which at first glance may appear arbitrary to the casual reader. However, goods like poultry, pork, beef, bird eggs, refined vegetable oils, cocoa butter, noodles, fruit juice and cement are there for good reason – to protect national industries. Though not on the list, rice smuggling alone has been resulting in a yearly loss of an estimated N110 billion (£452 million), a figure on the rise as of January due to a new hike in rice import tariffs. However, the tariff is, again, a tool in protecting the national rice-growing industry.
“I want to see large-scale farming take place,” says Mr Dikko. “If you can do that, nobody will want to import rice. When the government decided to ban the importation of juice, local producers rose to the challenge. They started producing fresh juice that is better than what was coming from Spain. Imported juice often loses quality after spending a long time in the containers in tropical countries like ours. If you import juice to Nigeria now, you will not have a market because local companies are totally in control. “If you bring in imported noodles, nobody buys them because you can produce them here. If we have mechanised farms that produce and process rice in large quantities, there will be no market for imported rice. Do we need to import cement now? No, the factories here are producing 800 bags per minute now, which is more than the current demand. So, we export the excess.”
For those who ignore the appeal to protect national industry, the NCS also highlights that it is ultimately cheaper and easier to import goods the legal way rather than evading dues through bribes. In line with his strategy to thoroughly modernise and revamp Nigerian customs, Mr Dikko is forming strategic collaborations with other agencies within Nigeria, such as the Economic and Financial Crimes Commission (EFCC), and abroad. The most notable of late are the Customs Mutual Assistance Agreements (CMAA) with the USA and Argentina, both signed in April. The bilateral agreements will allow the countries’ customs agencies to prevent, repress and investigate customs offences, as well as to combat illegal cross-border smuggling, financial crimes and terrorism.
According to the Nigerian Comptroller General, Nigeria is now in talks with China and India to arrange a similar agreement. With a firmer grip on smuggling control and a smoother, more efficient flow of import-export traffic, the NCS will be able to significantly raise tax revenues, which will in turn be reinvested by the government in developing a stronger, more diversified domestic economy.