A place of ancient history and warm hospitality

Article - December 18, 2013
Not only does Sudan boast UNESCO honoured archaeological sites, abundant wildlife and a crystal-watered coastline, it offers a characteristically warm and friendly welcome too 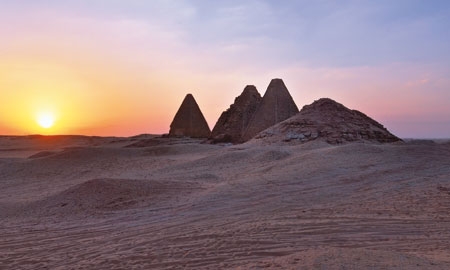 As one of the largest countries on the African continent, Sudan is as undoubtedly enigmatic as it is gigantic. Moreover, its reputation as an unknowable yet notoriously troubled land has long been perpetuated after decades of civil war persistently deterred the most curious of tourists.
However, since the signing of the Comprehensive Peace Agreement (CPA) in 2005 and the end of the majority of conflicts in the region, an ever growing number of travellers have been returning from Sudan with tales of not only stunning landscapes and ancient cultural heritage, but the inspiring and sometimes overwhelming hospitality of the Sudanese people (which completely contradicts the less than privileged lives in which many of them reside).
In fact, the natural warmth and generosity of the Sudanese has become legendary among the increasing number of tourists who have visited the country in the last few years, and this is a trait that will serve Sudan very well as its tourism industry really begins to establish itself in the years to come.
With news continuing to spread that the country is a gradually safer and ever friendly place to visit, the industry is seen as a key strategy to boost its economy as well as improve its international image and reflect the good nature of its society.
Indeed, little is it known, for example, that Sudan is actually one of the most culturally rich countries in the whole world – with its population divided among 19 major ethnic groups and about 597 subgroups who speak more than 100 languages and dialects. With such wide ethnic variety it means that wherever you go in this huge nation, you’ll discover something traditionally distinct.
One inclusive characteristic that does bind the many different Sudanese people together, however, is their love of music, art and dance – ensuring that this Afro-Arab country is always a very vibrant and lively place to be.
Meanwhile – again owing to its great expanse of lands – Sudan is as geographically diverse as it is culturally, meaning that its abundance of beautiful, natural and historic resources provide for a good number of tourist attractions. While benefitting from some of the continent’s most abounding quantities of wildlife at many of its protected national parks, the major tourism draws are largely located on the 700km-long Red Sea coast, including popular diving spots at the magnificent coral reefs, family boat trips and other adventurous water sports.
Furthermore, the numerous impressive pyramids, temples and other ancient sites littering the northern deserts are equally a treasure to behold, and just another one of the great surprises you might find if you visit Sudan.
And so with tourism infrastructure and services now steadily expanding, it won’t be long before Africa’s once forgotten gem is surprising a few more people with an inherent warmth and beauty that has remained shamefully undiscovered for far too long.