A land of surprises

Discovering the hidden attractions in Japan, from ancient shrines to amusement parks 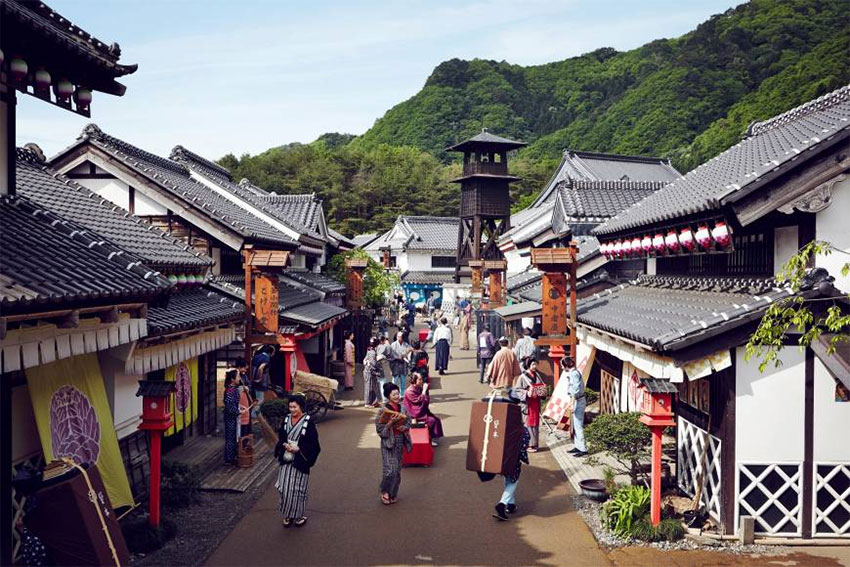 Japan is far more than Mount Fuji and Tokyo, but according to a 2016 McKinsey report, the vast majority of Japanese tourism attractions are relatively unknown to the world. The Great Buddha of Kamakura, the Todai temple of Nara, the Toshogu Shrine of Nikko, Ise-jingu Shrine, Shiretoko National Park—the list of attractions in which awareness rated under 10 percent of those polled was too long.

Yet these cultural attractions have great appeal. Kamakura’s Great Buddha, a monumental outdoor bronze statue reaching some 13 meters high, is the second largest Buddha in Japan, surpassed only by that at Todai. The Kumano Nachi Shrine, a few kilometres from the hot springs resort of Katsuura, on the lush southern tip of the Kii Peninsula, is part of a large complex of neighboring religious sites that exemplify the fusion of Buddhist and Shinto influences. Here, in the verdant surroundings, visitors can see the tallest waterfalls in Japan. Ise-jingu in Mie Prefecture contains 125 shrines and is roughly the same size as Paris. More than 1,500 rituals are performed there yearly to pray for the Imperial family and the peace of the nation. The inner shrine at Ise, established more than 2,000 years ago, is considered Japan’s most sacred shrine.

These are just a few examples of Japan’s immense, and mostly unexplored, offer. Aya Aso, President and CEO of Agora Hospitalities, says, “While Kimonos and Mount Fuji are well known symbols of the country, they do not depict Japan’s full cultural diversity. Tourists usually visit Tokyo and Kyoto, and then leave. To further enhance our country’s attractiveness, we must promote our diversity to its fullness.”

Hiroshi Mizohata, Commissioner of the Japan Tourism Agency, agrees. “While Americans and Europeans are aware of the major attractions of Japan, they quite often do not have a complete picture of the country. They are not aware of its diversity,” he says.

“Cultural exchange between countries is like an international marriage. It is about exchanging values and understanding different cultures”

This lack of awareness also spills over into Japan’s recreational offer. Japan offers some of the best powder skiing in the world, for example, with an average of 10 to 18 meters of snow per season at most resorts, but it is a destination that flies under the radar of most international skiers. This is slowly beginning to change, says Shuhei Suzuki, CEO of Nippon Ski Resort Development Company, in Hakuba, a resort in the Japanese Alps near Nagano. “Hakuba has the second largest contingent of foreign skiers in Japan, but it has yet to reach its full potential. But year after year, its reputation as a destination with reliable deep powder snow and Japanese traditional culture is increasing,” he observes.

In similar fashion, many visitors overlook Japan’s wonderful parks, where true gems of Japanese culture can be found hidden away. The country’s oldest park, Asakusa Hanayashiki, in Tokyo’s lively Asakusa district, has been operating since 1853, when it opened as a flower park for the visit of the Commodore of the U.S. Navy, Matthew Calbraith Perry. Today, it offers a full range of attractions and eateries, along with shops boasting vintage souvenirs. It also has Ninja training and full kimono and tea ceremony experiences at more accessible prices than many of the larger parks.

“Asakusa Hanayashiki is not just an amusement park; we are not fancy like Disney Land and we do not aim to be so. What we instead want to emphasize to our visitors is the culture and the long history of the park,” says park manager Hirota Akihito, adding that Asakusa Hanayashiki collaborates with the Asakusa district through carnivals and festivals to create a multiplier effect.

“Starting in December 2016, we established a new joint activity where we offer Japanese Hagoita classes. Hosting these events collaboratively and offering free entrance to the tourists in the area are some of the efforts we are focusing on. We are also constructing a multi-purpose hall to be opened in June, 2018, which will offer more cultural events such as the Geisha show and the Tea Ceremony.”

Edo Wonderland in Nikko is another park with an authentic cultural offer. Based around the Edo Era (1603-1868), the 50-acre park is a replica of a small Edo-style town, replete with forested areas, shops, small eateries, theaters, museums and exhibitions, with ninja staging mock fights and geisha parading through the streets. Ryoichi Yuki, park CEO and president, says, “People come here to understand the Edo Period, and the history of Japan. Tokyo was Edo so to know our culture, one must get to know the Edo Era, and it has been maintained here in a very authentic way.”

Mr. Yuki says he hopes to attract more American visitors in the future. “Cultural exchange between countries is like an international marriage. It is about exchanging values and understanding different cultures and how we can comprehend each other. As a Japanese person, I want to support the way that Japan is opening to the world. I want to be part of the transformation.”